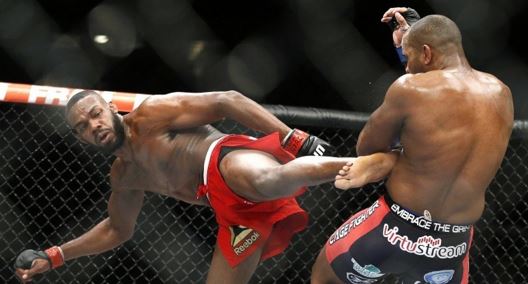 Jon “Bones” Jones, arguably the best pound-for-pound fighter in the UFC, simply can’t stay out of trouble. The former UFC Light Heavyweight Champion defended his title nine consecutive times, but was forced to vacate the belt for disciplinary reasons.

In April of 2015, Jones was involved in a hit-and-run accident after running a red light and crashing his rental car into two other vehicles. The UFC stripped Jones of his belt for violating the Athlete Code of Conduct Policy, and had Daniel Cormier square off against Anthony Johnson one month later for the title.

With Cormier now holding the belt, Jones is scheduled to fight the Light Heavyweight Champion on April 23 in Las Vegas. However, Jones finds himself in hot water again after being cited for drag racing in Albuquerque, New Mexico.

Due to the hit-and-run case last April, Jones entered a probationary plea agreement that could be violated with these new charges. Early reports state Jones was given five total citations, which included failure to stay in a traffic lane and illegal equipment modifications. It’s believed Jones was driving a white corvette by himself when the incident took place.

A few weeks ago, Jones declared at a press conference that he was currently living a sober life for the first time in his professional career. There hasn’t been any mention of substances being involved in Jones’ latest screw-up, but it wouldn’t be the first time Jones operated a vehicle while impaired. He pleaded guilty to driving while intoxicated in 2012 and received a misdemeanor.

link
The Cormier-Jones rivalry has become one of the most heated in today’s UFC, and was expected to be a huge event for the sport. UFC President Dana White has yet to comment on whether Jones will still be given a title shot at UFC 197 against the current Light Heavyweight Champion.