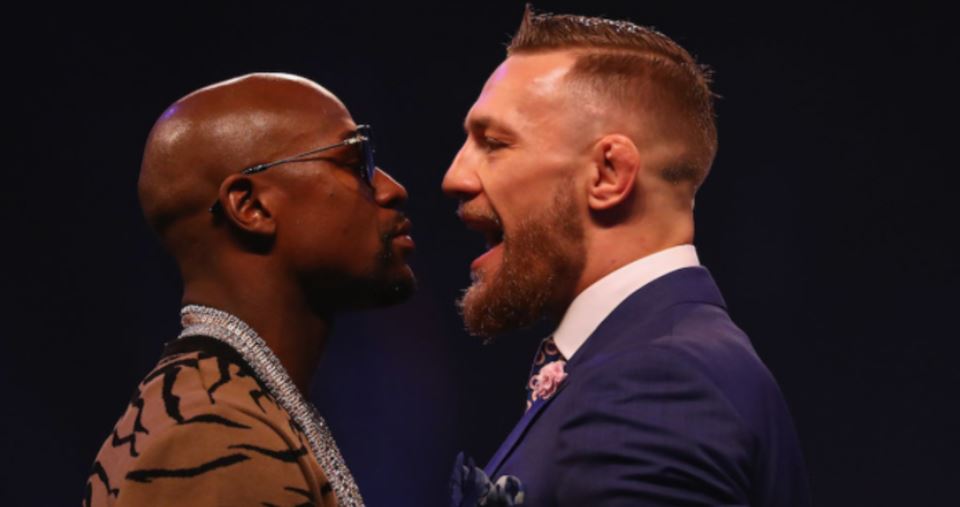 In case you have been living under a rock the past few months, the Floyd Mayweather-Conor McGregor fight is scheduled to take place this Saturday in Las Vegas. Never have we seen a spectacle to this magnitude. The two colorful personalities have been touring all over the place in order to hype the fight up. In the process, they’ve traded an immense amount of verbal jabs. Now, it’s time to see them exchange actual jabs in the ring.

We’ve come up with five feasible results for the match (and by feasible, we mean satirical):

Mayweather has registered one knockout since 2000 — though it occurred during the very controversial match versus Victor Ortiz. His punching impact has been described as akin to falling softly on a pillow. His ability to ‘ping’ opponents with innocuous flurries makes him exceptional as a technical fighter, but as his record indicates, hasn’t led to a ton of KO’s in the latter stages of his career.

Though neither Mayweather nor McGregor have a whole lot in common, we do know that both are entertainers. McGregor really doesn’t have much to lose in this fight. He’s getting the biggest payday of his career, and is widely expected to lose. Since he’s already banked a considerable amount of cash, he could do what he does best… entertain the fans. He’s easily the more popular of the two fighters. McGregor routinely charms the masses with his thick Irish brogue, affable personality, and magnetic aura.

There’s a real chance that we’ll see McGregor dance around the ring whilst wearing an Irish flag as a cape in order to mock Mayweather. It even wouldn’t be a surprise to see ‘Mystic Mac’ engage the crowd in an Olé, Olé, Olé chant. Hell, he may even try getting those in attendance to do the wave. In the midst of all of this hoopla, Mayweather will stealthily sneak up behind McGregor — popping him as soon as the Irishman turns around.

Now, this would be something. We know McGregor has to be unorthodox if he has any chance of pulling off the upset. If he tries to box him conventionally, he’ll likely lose. McGregor is far from conventional. As such, we expect to see some crazy sh*t from the Dublin native.

What we’d love to see is McGregor giving off the appearance to potentially attempt the crane kick. The mere sight of McGregor standing like a praying mantis could throw Mayweather off his game just enough for a quick hit. However, we could also see McGregor overpowering Mayweather with sheer force — swinging his arms around like a glorified helicopter, just hoping that he’ll land one good knock.

We can unequivocally say that McGregor is the far stronger striker of the two. Should he get the brief opportunity, he could do some damage — ultimately ending Floyd’s shot at a perfect 50-0 record.

In this version, we will see the crane kick. McGregor is accustomed to fighting with the choice of using both his arms and his legs. In this bout, he’s not allowed to utilize half of what makes him such a lethal UFC competitor. This will be the first time (outside of training) in which McGregor can only use his fists.

Mayweather — much like McGregor — will attempt to use a bevy of head games in order to get under McGregor’s skin. In the heat of the battle, there’s no telling whether McGregor may snap. And by snap, we mean Mayweather’s arm on a submission hold in the center of the ring. One brief lapse in judgment could signal a disqualification for McGregor, and a potentially broken shin for Mayweather.

A Fight Ensues Via The Respective Entourages

It’s no secret that the respective parties for each fighter do not like each other. The racial overtones heading into this fight are palpable — as was the tension during each press conference on the touring junket. One can expect some jawing between each corner prior to the fight, during the fight, and likely after the fight.

McGregor’s corner will include his boxing coach (Owen Roddy), his head coach (John Kavanagh), and his sparring partner — UFC fighter Artem Lobov. Though he won’t be ringside, Dana White will be patrolling the action from somewhere in close proximity. Mayweather Productions will feature CEO Leonard Ellerbe — who looks as spry as any fighter today. Duly, the ornery Floyd Mayweather Sr. will be there right next to his son.

Though not officially a part of his entourage, the crowd expects to host plenty of those hailing from Ireland in support of McGregor. It might not take much to have an all-out brawl featuring the respective supporters of each fighter. One could envision Mayweather Sr. having White in a vicious headlock. Lobov likely would be trying to crush any enemy in sight. In essence, we’d be seeing a real-life Royal Rumble — without the hokey nature of WWE. The actual McGregor-Mayweather duel might be postponed, but this surely would be just as — if not more entertaining.

The Fight Goes The Full Distance

The most likely outcome includes having this fight go the distance. Floyd will dance around, evading big swings from McGregor. In the process, he’ll ‘dink and dunk’ with quick blows. McGregor won’t necessarily suffer the physical pain he’d normally endure in a UFC fight, but he’ll be demoralized by the fact that Mayweather will be nearly impossible to hit cleanly.

Should this occur for 12 rounds, those at home and in attendance will be highly disappointed.