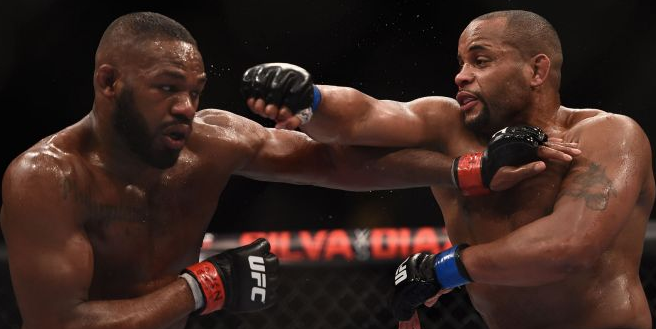 When former Light Heavyweight Champion Jon Jones was arrested last week, his scheduled rematch against current title-holder Daniel Cormier was in serious jeopardy. But fast-forward one week, and it’s Cormier who will no longer be in the octagon on April 23.

Despite losing to Jones last year, Cormier won the belt against Anthony Johnson after Jones was forced to vacate it for disciplinary purposes. The Olympic wrestler defended his belt against Alexander Gustaffson and was set to make his second title defense in this highly anticipated rematch. However, a leg injury has forced Cormier to withdraw from the event.

To the surprise of many, Jones took the high road when commenting on Cormier’s withdrawal. The two are bitter rivals who have not hidden their distaste for one another, but Jones took to Twitter to extend his support:

In an even more surprising move, Jones released a video on Instagram saying he would still like to fight on April 23. Jones has never been a fan of fighting on short notice, but after a tumultuous year, he said he owes it to his fans to put on a show at UFC 197. A fill-in for Cormier has already been announced, as the No. 6 contender in the Light Heavyweight division, Ovince Saint Preux, has accepted the bout.

Later in the video, Jones also said he’d be willing to fight at the Light Heavyweight (205 pounds) or Heavyweight (265 pounds) division. Jones has never fought outside the 205-pound division, but his rare combination of size, length, athleticism, speed and power seems capable of translating to any weight class.

Jones seems to be taking a page out of Conor McGregor’s playbook by showing a willingness to hop around divisions, and might have what it takes to be the first UFC fighter to simultaneously hold multiple division titles.

But in order for Jones to do that, he’ll first need Cormier to get back in the octagon.