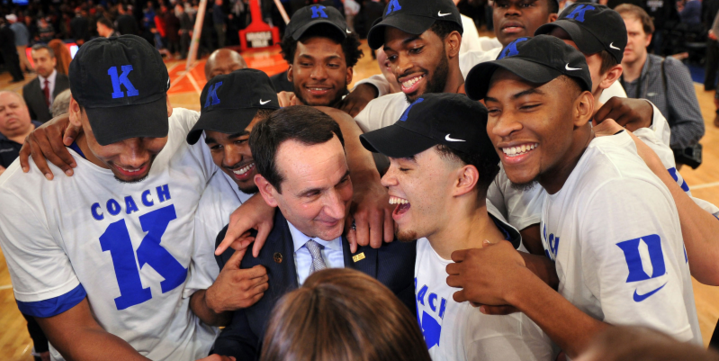 College basketball is back underway which only means one thing – the countdown to March Madness can officially begin. With Duke looking to repeat as champions, Kentucky hoping to reload after losing seven key contributors from last season’s squad, and some new/familiar faces atop the Associated Press’ Top 25, let’s take a look at five things we have already learned one week into the college basketball season.

1. Kentucky Is Back, And Isn’t Going Anywhere

2. LSU’s Ben Simmons Is Living Up To The Hype

Ben Simmons arrived in Baton Rouge with unimaginable expectations placed on him, and so far, he has lived up to every one of them. After a casual 11 points, 13 rebounds, 5 assists and two blocks in his first collegiate game, Simmons followed it with 22 points, nine rebounds, six assists and four steals against Kennesaw State. Yes, the opponent isn’t the most difficult test, but Simmons is already showing his insane versatility. It’s still ridiculously early in the season, but Simmons taking on Kentucky on January 5th already appears to be one of the best games of the year.

3. The Grayson Allen Hype Was A Bit Premature

Grayson Allen is a tremendous player, but after two games, experts were anointing him as the frontrunner for Naismith College Player of the Year. After averaging 27.0 points through his first two games, Allen was completely shut down by a stifling Kentucky defense. Allen went scoreless in the first half, shot 2-for-11 in the game and committed four turnovers in the Blue Devils’ loss. Kentucky’s length and athleticism overwhelmed Allen, and he will need to prove this game was a fluke if he is to become an NBA player.

4. Mid-Atlantic Christian Is The Worst College Basketball Team In History

I don’t know anything about Mid-Atlantic Christian, and I don’t need to. Any team that allows Citadel (yes, Citadel), to score 83 points in 20 minutes of basketball should not be allowed to compete in collegiate athletics. I have not taken the time to look at their remaining schedule, but will go out on a limb and predict they fail to win a game this season.

5. The Power 5 Conferences Are Stacked… And Ready To Beat Each Other Up Wichita State has already lost, which immediately indicates mid-majors are dead and it’s all about the Power 5 Conferences. Not actually, but the Big Ten, SEC, ACC, Pac 12 and Big 12 each appear to be deeper than usual.

The Big Ten will be absolutely brutal with Maryland, Michigan State and Indiana at the top, and Kentucky should have a bit more competition than usual in the SEC with LSU and Vanderbilt. The ACC is always difficult, and this year should be no different with North Carolina, Louisville, Duke, Virginia and Notre Dame (to name a few). The Pac 12 never does each other any favors, and the Big 12 containing Kansas, Iowa State, Oklahoma and Baylor promises to be a war.

The ‘76 Hoosiers can pop open the champagne now – no team is finishing this season with a perfect record.