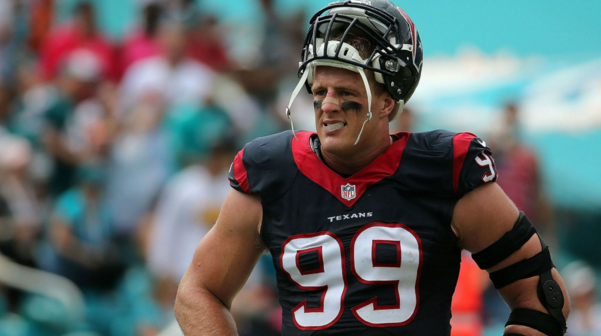 J.J. Watt is already the best defensive player in the league. But after a report surfaced on Thursday, the 27-year-old should certainly be considered the toughest player in the NFL as well.

Watt, the 11th overall pick in the 2011 draft, called the 2015 season the most difficult of his career. That’s easy to understand now, as a report stated the Wisconsin native had five torn abdominal, groin and adductor muscles that he played through.

Despite the mounting injuries though, the 6-foot-5, 290-pound defensive end didn’t miss a single game. Watt was also unbelievably productive playing through the pain, as he went on to win his third Defensive Player of the Year Award.

The 4-time Pro Bowler didn’t just suffer from tears — he also had a broken hand, which forced him to play in a cast for the final three games. Last season, Watt managed 76 combined tackles, 17.5 sacks and 3 forced fumbles. While he didn’t have an interception, Watt still defended 8 passes.

Watt has been an absolute monster over his career, leading the league in sacks twice (2012, 2015) and finishing second in the MVP race in 2014.

His hard work, on and off the field, has proven itself over the years. After receiving offseason surgery this year, Watt should be back at full strength entering the 2016 season.

And based on what he managed to do severely injured, teams have to be terrified of a fully healthy J.J. Watt.