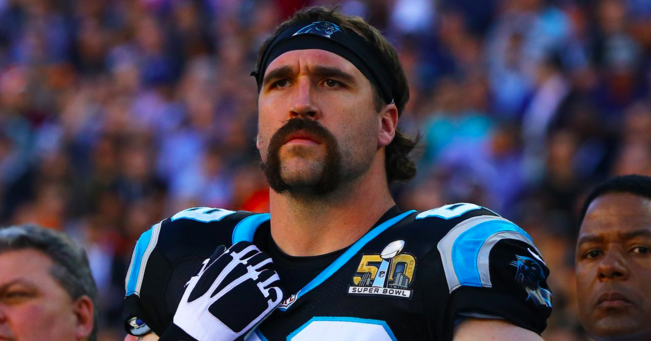 The Carolina Panthers’ defensive end announced his retirement on Thursday with a hilarious video posted to Twitter. The 6’6”, 255-pound sack machine from Idaho State University posted the video rocking boots, a cowboy hat, and fur coat while riding off into the distance.

Make no mistake, while Jared Allen has always been known to have a colorful personality, the NFL will most definitely miss his talent. Allen is the NFL’s active sack leader with 136 QB wrap-ups. After being drafted by the Kansas City Chiefs in the fourth round, Allen played for the Minnesota Vikings, Chicago Bears and Carolina Panthers.

In his 12 seasons in the NFL, he never received a Lombardi Trophy, but got close this year after falling to the Denver Broncos in the Super Bowl. His best season came in 2011 with the Vikings in which he led the league with 22 sacks.

The 5-time Pro-Bowler holds the record for the most consecutive games with a sack (11) and most safeties in a career (4). He leaves with 643 tackles, 31 forced fumbles and 1 touchdown.

Despite his many accolades though, they pale in comparison to his comical behavior. I just want to say thank you for an amazing 12-year career,” Allen said while mounted on a black horse. “This is the part where I was going to ride off into the sunset, but seeing how there is no sunset, I’m just going to ride off.”