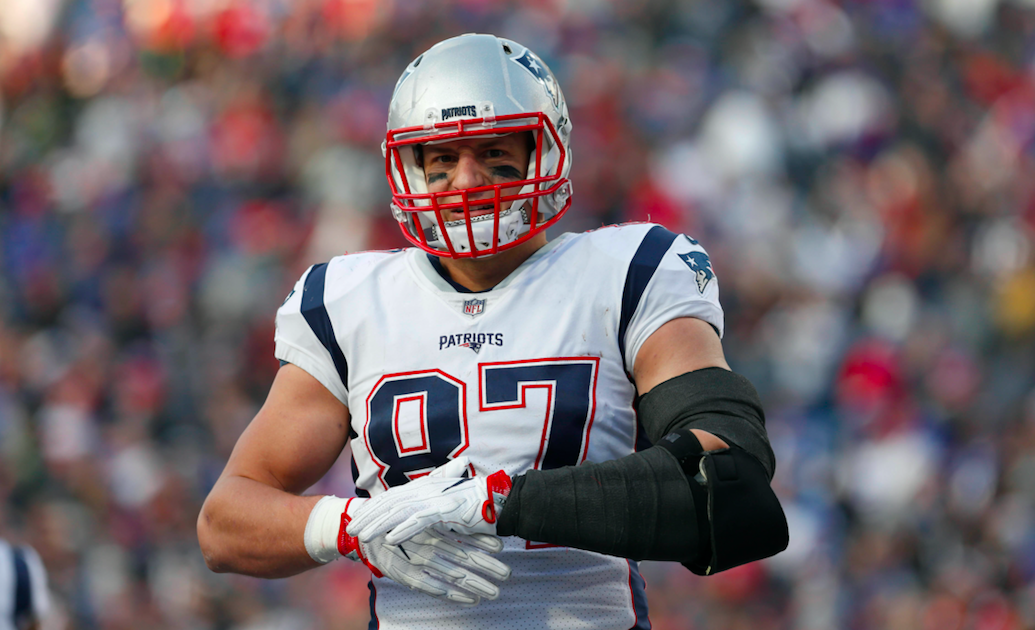 It got weird in the NFL this week. While player reps tussle with owners over the league’s attempt to effectively “buy” the end of the protest movement with nonprofit donations, the games grind on. The Steelers-Bengals game on Monday Night Football was a bloodbath, as players got carted off willy-nilly. Rob Gronkowski, often portrayed as a lovable goofball with a hyperactive libido, showed himself to be a somewhat more sinister breed of NFL player on Sunday when he cheap-shotted Tre’Davious White of the Bills. Gronk drove White’s head into the ground after the play ended. He showed zero remorse, smirking after the hit and having the gall to appeal his very lenient one-game suspension. It’s hard not to see this as an instance of a Patriots player – not to mention a Caucasian player – getting a reduced penalty for an egregious act. MVP hopeful Carson Wentz led the 10-1 Eagles to town, where he’d be facing a Seattle secondary missing Richard Sherman and Kam Chancellor. But the Philly offense was far from the story of the game, as they played from behind and struggled to put up points all game long. Russell Wilson had a very efficient game, ceding just two sacks, throwing three TDs, and scrambling for 31 yards. The Seahawks line buried Wentz three times, forced two fumbles, and picked him off. They are now just a game behind the Rams for the NFC West and currently sit in the top Wild Card spot. While a 14-9 loss to the Vikings is neither surprising nor a real red flag given Minnesota’s success this season, Dan Quinn’s team has to feel poopy after letting this one slip away at home. It’s hard to say whether they were more disappointing on the offensive or the defensive side of the ball. On offense they scored just three field goals, going 0-for-1 in the red zone and a putrid 1-of-10 on third down. Their running game was solid with Devonta Freeman back in the fold, but Offensive Coordinator Steve Sarkisian again failed to get the ball into the hands of Julio Jones, Austin Hooper, and Mohamed Sanu. On D, they were gashed by the running game all day long, allowing Minnesota to pick up early down chunks that almost always led to third-and-manageable, hence the Vikings’ 6-for-12 results on third down. The fourth quarter drive Falcon fans are so used to seeing never came, and now at 7-5, Atlanta finds themselves up against it, needing to win three of their final four games: vs. Saints, at Buccaneers, at Saints, and vs. Panthers. Williams entered the year buried deep on the Green Bay depth chart, but a combination of opportunity and ability has landed him atop the Pack’s options at running back. He went in the fourth round of the 2017 draft and started the year behind converted receiver Ty Montgomery and 2017 seventh round pick Aaron Jones. He got his first real shot in Week 10, when he grinded for 67 tough yards. He’s totaled 80 carries and 11 receptions over the last four weeks, finding the end zone three times. Another testament to Green Bay’s remarkable player development and scouting, Williams looks locked and loaded as the Pack’s top back. Barber had never gotten more than 12 carries in a game before Sunday when he exploded for 143 total yards in a losing effort at Lambeau Field. With Doug Martin sidelined by injury, the ground game came down to Barber and veteran Jacquizz Rodgers for Tampa. But it wasn’t even a question of who was featured once the game got rolling, with Barber gaining 14 rushing yards on the Bucs’ first drive. He continued to pick up good yardage all day long, and even led the team in receiving. Barber has set himself up for big carries, even when Martin returns from the concussion protocol. This was the game fantasy players (including yours truly) had been awaiting for weeks as the Chiefs offense languished in the doldrums. Hill finally busted out, scoring two long TDs on his way to 185 receiving yards. He and QB Alex Smith couldn’t lead KC to victory, as they fell to the Jets, but the speedster reasserted himself as one of the NFL’s top playmakers. The Chiefs face the Raiders at home this week, which should provide Hill with ample opportunities to follow up on this highlight-laden performance. One of the many casualties of a violent Steelers-Bengals match-up, Shazier had to be hospitalized after a scary injury to his spinal column that left him struggling to move his lower body after he went down. Shazier is one of the leaders on defense for the 10-2 Steelers who have allowed the third-fewest points on the season (213, or just 18 per game). The former first round pick out of Ohio State was leading Pittsburgh in tackles, interceptions, and forced fumbles before the injury. Despite this massive loss, the Steelers still hold the #1 Seed in the AFC over New England. They’ll try to cope with the loss of their best defender as they push toward the playoffs. The Niners got another win! I almost typed, “The Niners got a win,” because I honestly forgot they beat the Giants last month. Their win over the Bears slides Chicago into the #6 slot in the draft, and basically guarantees the Cleveland Browns the top overall selection. Surprise, surprise. That development might affect the future of USC Trojans QB Sam Darnold, who reportedly will consider remaining in college for another year in order to avoid ending up in Cleveland. Yeesh. He’d be passing up a massive payday while risking an injury that could kill his draft stock – not to mention the fact that he’ll miss out on the opportunity to turn around the fortunes of the lowly Browns. HAHA. Just kidding. No one can save the Browns.