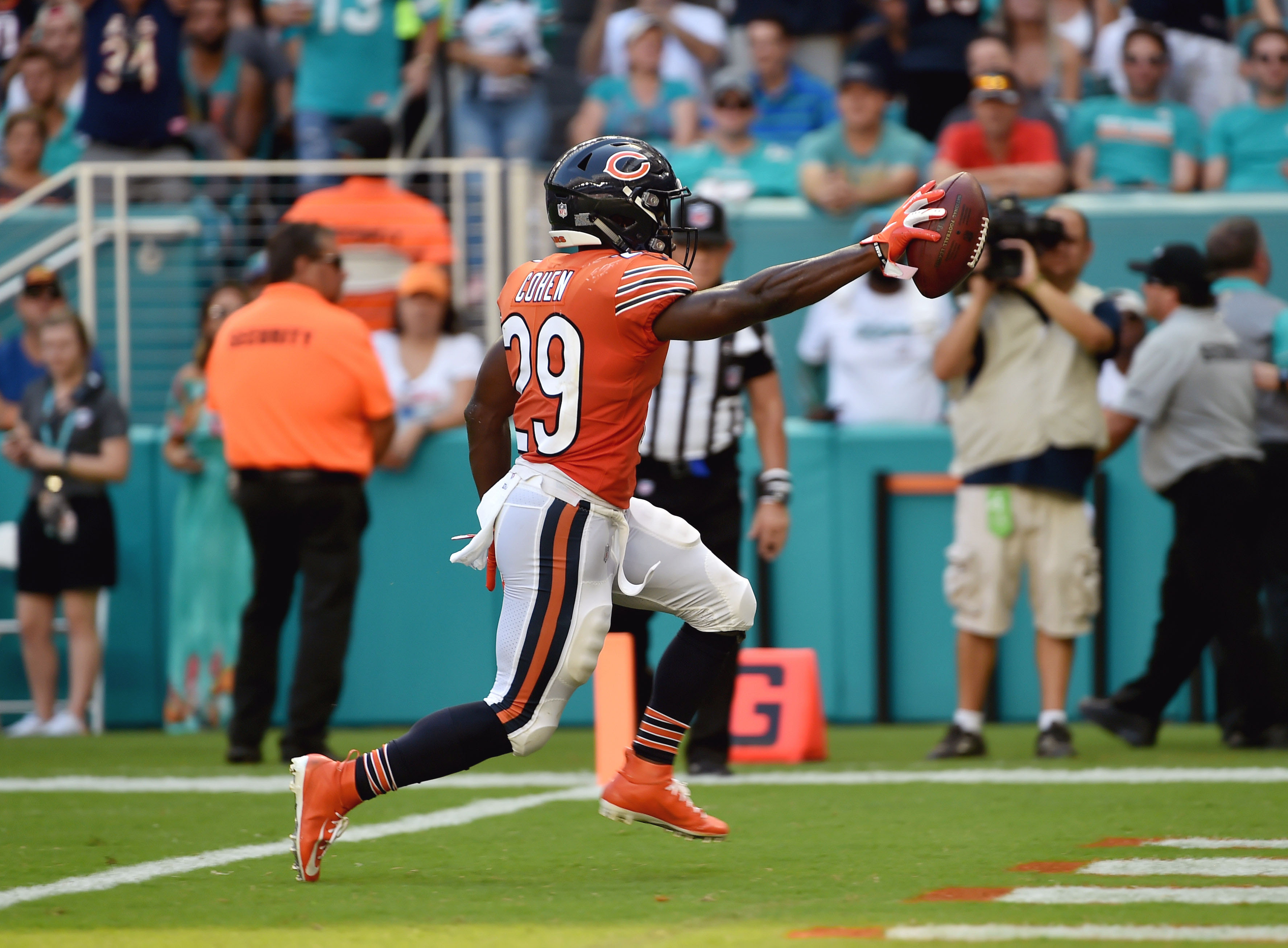 Here’s what they each came up with for Week 8:

Since opening the year with a three touchdown performance, Keenum has only thrown five touchdown passes over the past six weeks. In the same amount of time, the QB has been intercepted six times. Going against a below-average defense this weekend, I envision Keenum will break out of his slump. 300+ yards, three total touchdowns (2 passing, 1 running) and only one interception.

Gurley, the current front-runner for MVP, has 14 touchdowns on the season. The Packers allowed 30 points to the 49ers their last time on the field. Gurley > Green Bay. Cohen has become more involved in Chicago’s offense as the season has progressed. The speedster has scored a touchdown each of the past three weeks. He has cracked 120 yards of total offense twice (174, 121) and nearly accumulated 100 against New England. Cohen should enjoy another big day against the Jets.

Hilton hauled in two touchdowns against the Bills despite playing with an iffy hamstring. Andrew Luck’s favorite target should be more active this week. Oakland’s secondary is suspect and there may be some lingering tension that hurts the team as a result of the Amari Cooper trade. Brown has the 15th most receiving yards in the NFL despite having only 28 receptions. Averaging nearly 20 yards per catch, Brown’s home run ability is something I’m willing to take a chance on. He’s had two great weeks and only one poor start. His propensity to find the end zone is also attractive.

Since Josh Rosen took over as the Cardinals QB, Kirk has seen a slight uptick in his production. As Kirk and Rosen continue to build together, Kirk’s numbers will rise. A decimated San Francisco secondary lends Kirk a great chance to top 100 yards for the first time in his career.

Cook is coming off two poor games — 30 combined yards — but things should change in a big way this week. Cook leads the team in targets, receptions and yards. With Cooper now in Dallas, even more throws should be headed his way. I smell a 95-yard, two touchdown performance from Cook this week.

With Golden Tate and Kenny Golladay enjoying good years, Jones’ opportunities have been somewhat limited. Despite fewer throws coming his way, Jones is one-of-four Detroit receivers with three touchdown catches. The Seahawks will likely try to limit Tate — a former Seahawk — opening up more space for Jones. Look for Jones to haul in a 30-40 yard touchdown against Seattle.

Arizona limited San Francisco to 18 points a few weeks ago in The Bay, including a touchdown in garbage time. The Cardinals also forced the 49ers into five turnovers. Expecting five turnovers once again would be a tad unrealistic. However, I foresee the birds forcing C.J. Beathard into a couple poor throws resulting in at least two interceptions.

The best QB in football could be in for his biggest performance of the season. The Packers aren’t very good. They’ve been decimated at receiver, Mike McCarthy refuses to give his best backs the ball, and their defense remains a soft spot. The Rams are very good. Their offense works like a finely-tuned machine, and they have one of the scariest interior defensive line combos in NFL history with Donald and Suh. That said, Rodgers and Green Bay will likely be playing for behind, and will need a ton of points if they hope to stand a chance. I’ll bet on Rodgers having a big day in Los Angeles.

White has been the most consistent contributor in New England’s offense all season long. With Sony Michel out, and Rob Gronkowski questionable, expect White to dominate the target share en route to another big day. Jones appears to have finally staked some claim to be Tampa’s bellcow. The Buccaneers will remain a pass-first team, but Jones is athletic enough to make some plays through the air.

I’m jumping on the Thielen train before the well runs dry. You can’t ask for a better match-up with the Saints coming to town. New Orleans has given up enormous fantasy days to the likes of John Brown, Antonio Callaway, Sterling Shepard, and Calvin Ridley. With Marshon Lattimore likely shadowing outside threat Stefon Diggs, the Saints don’t have any player on their roster that can match-up with Thielen in the slot.

I’m parlaying Landry’s big day from last week into a juicy match-up with the Steelers. When Landry last saw Pittsburgh, he collected 106 yards with seven receptions on 15 targets — and that was with Tyrod Taylor under center. He’s had double-digit targets seven of eight weeks and should be trusted as a solid no. 2 receiver moving forward.

Andrew Luck has quietly returned to form over the past couple of weeks. While Eric Ebron has been the biggest beneficiary from Luck’s return thus far, it’s only a matter of time until Luck starts to rely on his top receiver again. The Raiders are a dumpster-fire on both sides of the ball, and have corners shuffling in every other week. With the possibility of facing off against Leon Hall or Dominique Rodgers-Cromartie in coverage, Hilton is going to feast in Oakland.

Absolutely can’t bench Njoku right now. The supremely gifted tight end has been on a tear, recording at least 50-plus receiving yards each of the past four weeks. He tacked on his first two scores of the season over the past two weeks, as well. The Steelers have given up the third most points to tight ends this year, and have relinquished huge fantasy days to Autin Hooper and C.J. Uzomah over the last two games.

Baldwin looked spry in London after having a one-catch, one-yard outing against the Rams in Week 5. Coming off a bye week, Baldwin should be healthier than he’s been all season, and the Lions have been beatable through the air. QB Russell Wilson hasn’t played up to his standards thus far, and is in a perfect spot to breakout in a must-win game for Seattle.

I still don’t believe in Chicago’s offense — especially in a game that they’re supposed to win. Trubisky has posted three consecutive 300-yard games, though he’s still prone to turning the ball over. The Jets could be in store for a game a lot like their opening match-up with the Lions when they hawked Matthew Stafford all night long. It will be interesting to see which middling team comes out on top in this one.