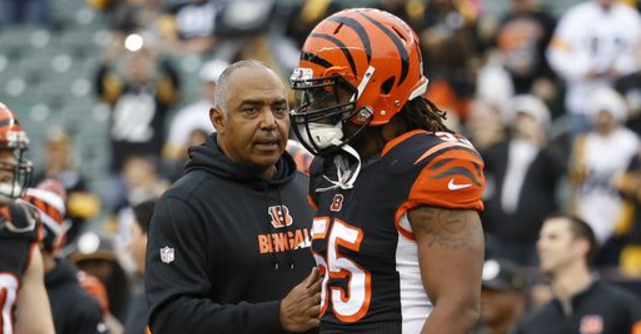 Bengals head coach Marvin Lewis has been revered among NFL circles for taking in troubled players and helping them succeed in the league. But it has never backfired quite like it did in Saturday’s Wild Card Round playoff game against the Pittsburgh Steelers.

With the Steelers ahead 15-0 late in the third quarter, things really began to heat up (weather aside) after linebacker Ryan Shazier landed a brutal hit on running back Giovani Bernard. Tempers flared, and not surprisingly, oft-troubled linebacker Vontaze Burfict was in the thick of it.

From that moment on, Burfict was an out-of-control 248-pound monster that the Bengals’ coaching staff simply could not control. After a sack by Burfict on Ben Roethlisberger (which sent Pittsburgh’s franchise quarterback to the locker room), the Bengals came charging back to take a 16-15 lead.

With the Steelers forced to go with back-up quarterback Landry Jones, the former Oklahoma Sooner immediately threw an interception with 1:43 to seemingly lock up a Bengals victory. After Burfict picked off the pass, he immediately darted to the locker room to signify Cincinnati’s emotional victory.

Unfortunately, Bengals running back Jeremy Hill kept things interesting by fumbling the ball on the very next play. With Pittsburgh being given one more shot, Roethlisberger heroically marched on to the field to play through his shoulder injury.

Down by one at his own 9-yard line with 83 seconds left, Roethlisberger and two Bengals (Burfict and Adam ‘Pacman’ Jones) did everything in their power to get Pittsburgh a victory.

As Pittsburgh’s Antonio Brown came across the middle, Burfict landed a brutal cheap shot that resulted in a 15-yard, unnecessary roughness penalty. After the play, Jones then bumped a Steelers assistant to tack on another 15 yards. Steelers kicker Chris Boswell then chipped in a 35-yard field goal with 14 seconds left to give Pittsburgh the win.

It was a heartbreaking loss for a Bengals franchise so desperate for playoff success, as it somehow matched up to the recent disappointing performances by Andy Dalton. While this one can’t be put on Dalton, much of the blame can once again be placed on the head coach.

Lewis has managed to save the careers of guys like Burfict and Jones, but after this loss, those two could be the very reason he won’t be in charge of the Bengals next season.