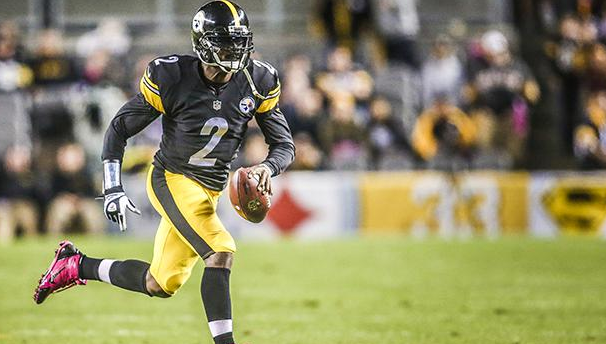 How the mighty have fallen.

Michael Vick was once the face of the NFL while a member of the Atlanta Falcons, but is now battling Landry Jones for the Steelers’ starting quarterback role. If you’re asking who Jones is, don’t worry – you are among the 99.9 percent of NFL fans who have never heard of him.

The former Oklahoma Sooner was drafted in the fourth round in 2013, and has severely underwhelmed as Roethlisberger’s back-up. With limited mobility, a below average arm and horrendous decision-making, Jones was never supposed to be a quarterback option. In fact, the Steelers signed Vick in order to prevent Jones from ever taking the field in a regular season game.

But when Vick went down in the third quarter of Pittsburgh’s Week 6 game against the Arizona Cardinals, head coach Mike Tomlin had no choice but to play Jones.

The Steelers could not have been more pleasantly surprised with Jones’ performance. Throwing for 168 yards, two touchdowns and zero interceptions, Jones helped erase a four point deficit and lead Pittsburgh to a 25-13 win.

Jones looked poised and accurate in the pocket, and seemed much more comfortable running offensive coordinator Todd Haley’s offense than Vick ever did. With no clear timetable on Roethlisberger’s return, it appears as if Jones will get the nod over Vick next week.

If you are unable to get the offense rolling with Le’Veon Bell and Antonio Brown by your side, it’s clear you shouldn’t be a starting quarterback in the NFL. But when a guy like Landry Jones comes in and makes you look bad, that’s a sign it’s time to retire.

This is the position Michael Vick now finds himself in.

Vick is no longer a serviceable back-up; he is a player we hold to an unrealistic standard because of the promise he once showed. That promise is no more, and sadly, Landry Jones’ performance signaled the end of Michael Vick’s tumultuous NFL career.