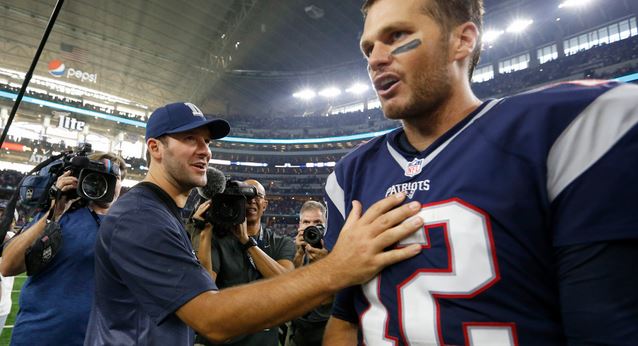 After the New England Patriots completely humiliated the Dallas Cowboys by a score of 30-6, Tony Romo had some surprising words for Tom Brady when they shook hands. Telling Brady, “see you in February,” many have taken this as a declaration by Romo that they will be meeting in Super Bowl 50.

However, assuming Romo has been watching his own team play during his absence, there’s no way he could possibly think his team will even make it to the playoffs.

Clearly one big misunderstanding, we’ve decided to take a look at the five most likely reasons Romo will see Brady in February:

1. Dallas Cowboys Owner Jerry Jones has already told Romo that he can be his ‘plus one’ for Super Bowl 50 at
Levi’s Stadium.

2. Romo is celebrating Brady and his wife Gisele’s seven year anniversary on February 26th, and was
simply RSVP’ing to the event.

3. Romo has yet to get Brady’s autograph, and is hoping he can get a signed football during Super Bowl
media week.

4. Romo is tired of living in Dallas and is moving to Brookline, Massachusetts in February.
Coincidentally, this is where Brady lives, and Romo simply reminded the New England quarterback how
excited he is that they will soon be neighbors.

5. The NFL’s ever-changing collective bargaining agreement has confused Romo, and he somehow thinks next
season kicks off in February.

With the Cowboys at 2-3 and now turning to Matt Cassel to lead the team until Romo’s return in Week 12, Dallas essentially has no chance of making the playoffs.

We love the optimism Tony, but the only way you see Brady on the football field in February is from Jerry Jones’ suite.