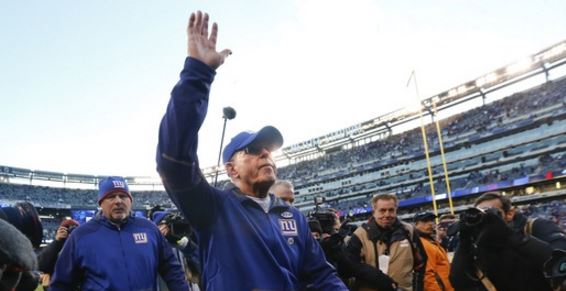 Following a third consecutive losing season and a fourth straight postseason absence, Tom Coughlin has stepped down from head coaching duties. In his 12 seasons with the New York Giants, he led the team to two Lombardi Trophies and five postseason appearances.

Coughlin announced, “I met with John Mara and Steve Tisch this afternoon, and I informed them that it is in the best interest of the organization that I step down as head coach. It has been an honor and a privilege to serve as head coach of the New York Football Giants. This is a not a sad occasion for me.”

The future Hall of Fame coach has dealt with rumblings about being fired throughout his 12 years in New York, but scrutiny was at an all-time high this season. Coughlin was consistently criticized for questionable clock management decisions, and his disciplinarian ways appeared to be growing old with the team.

Despite playing in the extremely weak NFC East, the Giants were unable to capitalize and finished with a 6-10 record. Losing six of their final seven games and playing uninspired football, Coughlin’s resignation was inevitable.

Although his time with the Giants ended on a sour note, Coughlin will still go down as the most successful coach in franchise history. His two Super Bowl wins over Bill Belichick and the New England Patriots will be remembered as two of the most unlikely Super Bowl victories in NFL history.

But in today’s rapidly changing league, Coughlin has proven unable to keep up from a tactical standpoint. While his greatness will never be forgotten, Giants fans (and Bill Belichick) should feel relieved to be entering a new era of Giants football.