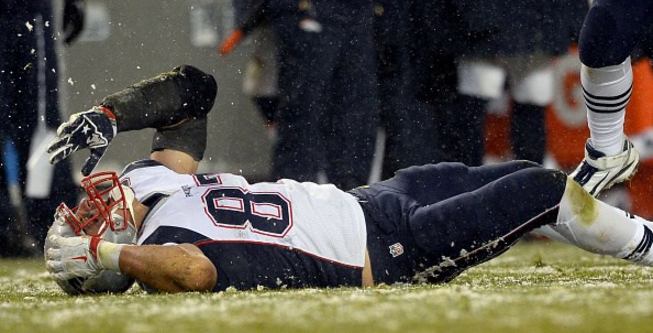 The Patriots would trade a loss for Rob Gronkowski’s health any day of the week.

As New England unraveled in the fourth quarter at Mile High Stadium, Gronkowski fell to the ground, writhing in pain after Broncos safety Darian Stewart hit him in the knee. The crowd went silent, and everyone was convinced we had seen the last of Gronkowski this season.

Despite an eventual overtime loss, an MRI later revealed Gronkowski suffered no tears and that it was a bruised right knee – a huge relief/win for Tom Brady and the New England Patriots.

Watching Gronkowski crumble to the ground, it immediately begged the question: “was the hit dirty?”

Following the game, Brady was asked this question, and had a surprising response. Telling the media, “I hate to see it, but it’s really the only way for defenders to hit now. I bet if you asked a lot of players they’d probably rather you go high than low. You go low, that’s what happens. I don’t think it’s dirty, I just think that’s the way football is being played now.”

It brings up an interesting point as the NFL continues to try to prevent concussions at all costs. Avoiding full-speed helmet-to-helmet contact is perfectly logical, but it leaves receivers susceptible to brutal leg injuries.

When it comes to tackling, there’s no winning for defensive players. All they can do is hope the receiver gets up unscathed. As concussions (hopefully) decrease, plays like the one against Gronkowski will only become more common.