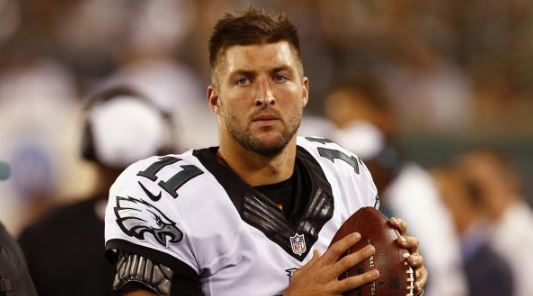 After a disappointing NFL career, former quarterback Tim Tebow will now purse professional baseball. According to Tebow’s agents, Nick Khan and Jimmy Sexton, the 2007 Heisman Trophy winner will host a workout for several Major League Baseball teams at the end of August.

The 28-year old athlete has not played baseball in over 10 years. However, while attending Allen D. Nease High School, Tebow was sensational, hitting .494 during his junior year as a left fielder. According to sources, the former Florida Gator has spent the last year working on his hitting and fielding skills.

There is no question Tebow possesses raw talent. In fact, some believe that the 6-foot-3, 245-pound athlete has what it takes to play professional baseball. Brodie Van Wagenen, the co-head of baseball for the Colonial Athletic Association, says people will be surprised by what Tebow brings to the table:

“This may sound like a publicity stunt, but nothing could be further from the truth. I have seen Tim’s workouts, and people inside and outside the industry — scouts, executives, players and fans — will be impressed by his talent.”

A former MLB catcher, Chad Moeller, reiterated Van Wagenen’s praise, saying, “I am beyond impressed with Tim’s athleticism and swing… I truly believe Tim has the skill set and potential to achieve his goal of playing in the Major Leagues.”

However, many experts are much more skeptical. Baltimore Orioles coach Buck Showalter scoffed at the idea, and one MLB scouting director had this to say:

“He’s missed 11 years in the batter’s box. Nobody overcomes that. I know Josh Hamilton missed four years and he came back. But he was the No. 1 pick in the draft. You’d have to be a guy like that and just have stupid ability. And nobody ever thought of Tim Tebow like that.”

Instead, Tebow was a lightly recruited high school prospect who failed to accomplish something NFL quarterbacks Tom Brady and Johnny Manziel both did – get drafted by an MLB team.

Tebow might earn a tryout with a few curious clubs in the near future, but those teams will quickly be reminded why he went undrafted 10 years ago.