The start of any NFL season is filled with overreactions, unsustainable trends and a whole lot of failed predictions. Teams are starting to settle into their correct spots in the standings, and there have been plenty of surprises across the league. Many of these statistical anomalies will dissipate, but let’s take a look at a few of them and see which ones are the most likely to hold throughout the year: The AFC East has been clouded by the baddies in New England for the better part of the past two decades. The Pats have won 13 of the last 14 AFC East titles, boasting a 72-percent win percentage in divisional games during that span. Bill Belichick and Tom Brady own this division, but three weeks into 2017, they’re sitting in third place (Jets have tiebreaker due to 1-0 division record). Above them are a pair of teams that most believed were tanking this season – the Bills and the Jets.

Buffalo has parlayed efficient QB play from Tyrod Taylor and a stout defense into huge back-to-back wins over Denver and Atlanta. New York looked the part of a bottom-feeder when they were routed by the Raiders in Week 2, but have responded with consecutive wins of their own. Buffalo currently sits atop the AFC East with a 3-1 record. New coach Sean McDermott’s team could very well be 4-0. Taylor barely missed rookie Zay Jones on a would-be game-winning touchdown pass on the final play of the game against the Panthers in Week 2.

For an idea of what will be needed to capture the division title, AFC East winners have won an average of 12.5 games per year since 2003. 12 could get it done this year with how the Pats started, but getting to that number could be easier said than done. Buffalo has some tough match-ups following their bye week. They beat the cream of the crop in the Falcons, but still have upcoming NFC South bouts with the Buccaneers and Saints. They get the Raiders (Week 8) and Colts (Week 14) at home, though both teams should have their quarterbacks back by then. Plus, a two-week west-coast road trip against the Chargers and Chiefs will be far from a cake walk.

Most importantly, they have two all-important December games against Belichick and company. Worth noting – the Bills have beaten Tom Brady just once in December (a game in which the Pats already have the division locked and Brady sat the second half). This Bills team was always going to be better than teams gave them credit for, but the schedule is quite unforgiving.

On the Jets side, finishing 4th in the division last year gave them a more fortuitous spread. They have the winless Browns coming up. Their only quick turn-around comes in Week 9 for a Thursday Night showdown against Buffalo, but the Jets will already be in New York that Sunday while Buffalo will be traveling from Oakland. This is starting to look possible for a team that was widely-projected to be selecting first overall in the upcoming draft.

Josh McCown has been playing better (2nd in the league in completion percentage). Matt Forte’s injury has actually opened up the door for the far younger and more explosive tandem of Bilal Powell and Elijah McGuire. Their defense is fast and talented. Of course, they could turn this all around by putting up a dud against Cleveland and proceeding to get thumped by the likes of New England and Atlanta. It sure has been a fun ride thus far though.

Rams as the Best Offense or Patriots as the Worst Defense? The workers that are helping build the Rams (and the Chargers, ugh) new, expensive stadium in Los Angeles should already be prepping a spot out front for Sean McVay’s statue. The 31-year old offensive wizard has done more in four weeks than Jeff Fisher did in five years. We’ve seen this story before – LA started last year 3-1 as well – but it’s different this time around.

Led by sophomore QB Jared Goff, the Rams are leading the league in points scored by a fair margin (35.5), while averaging over 380 yards of total offense per game. Todd Gurley is back to his dominant self, and has been the league’s deadliest pass-catching back (3 receiving touchdowns through four weeks after zero in previous two seasons). Most importantly, the Rams finally have multiple receiving threats.

They brought over Sammy Watkins from Buffalo, but they don’t have to solely rely on him. LA put up 41 in Week 3 against the 49ers when Watkins had a stellar 6-catch/106-yard/2-touchdown performance, but also scored 35 points against the Boys in Dallas while targeting their top receiver just twice. It’s that sort of depth and explosiveness that a top scoring offense needs. Also worth mentioning – their improved offensive line which has given up just four sacks in as many games.

While the Rams have gone from the worst scoring team in 2016 to the best scoring team this year, the Pats have done the complete opposite when it comes to their defense. After holding teams to just 15.6 points per game last season, New England’s banged up squad has been leaking scores to their opposition. Belichick’s crew is last in the league in yards allowed, and the difference between them and the next closest team is about a full game’s worth (1827 to Indy’s 1585). They’re second to last in scoring, but that’s only because the Colts offense has given up four defensive touchdowns.

Just last week they couldn’t stop Cam Newton, the same QB that got shut down by the illustrious New Orleans Saints defense. Getting steamrolled by the Chiefs doesn’t look as bad now, but they still face a serious talent deficiency on that end of the football. Matt Patricia’s crew looks out of sorts, but he’s an accomplished coordinator and will eventually make the right adjustments. They also have the Jets twice this year, which are ideal shut-out opportunities.

MORE LIKELY TO HAPPEN: Rams ending the season as the top scoring team, because New England will eventually figure it out and become a mediocre defense.

Tom Brady throws an interception or Browns win a game? Touchdown Tommy continues to defy the aging process with a red-hot start this year. The four-time Super Bowl champion has a 10:0 TD-to-INT ratio, and has tossed just two picks in his last 17 regular season contests. The Pats offense is predicated on short to intermediate routes, and playmakers like Brandin Cooks and Rob Gronkowski allow Brady to attempt tough passes that would normally end up in a defender’s hands.

His stat line isn’t a product of passive defenses either. The Chiefs were first in takeaways last season and the Panthers were first the year before that. Looking down the road, a pair of teams could break the streak in the Chargers or Broncos. Both teams have ball hawking secondaries with deadly pass rushers that can force Brady to give the ball away quickly.

That would mean the Browns would have to get a victory before Week 10. They might have their best shot this Sunday against the Jets. After recently handing the lowly Bengals their first win of the season, this could be another long year for Browns fans.

FIRST TO HAPPEN: Brady throws a surprise pick in the Super Bowl rematch against the Falcons in Week 7.

Kareem Hunt with most rushing yards or DeMarcus Lawrence with most sacks? Outside of Chief and Cowboy fans, there was virtually nobody that could have predicted these two young players would be leading the league in their respective categories.

For Hunt, the doubts had to do with a lack of touches. Kansas City selected the talented Toledo prospect even though they had Spencer Ware and Charcandrick West at the same position. Hunt figured to have a role in the backfield, but Ware was slotted as the featured back. An unfortunate preseason injury to Ware opened the door for Hunt, and he has kicked it wide open. He’s 140 rushing yards ahead of second-place Todd Gurley, and is averaging 7.4 yards per carry.

The rook is on pace for over 2,000 rushing yards, a mark that hasn’t been reached since Adrian Peterson’s 2012 MVP campaign (more on him in a bit). The Chiefs love their bell cows. Jamaal Charles was always kept on a certain carry restriction because of his slimmer frame, but Larry Johnson and Priest Holmes regularly toppled 300 carries per season. If Hunt can get close to that 300 mark, he’ll likely be at the top of the leaderboard.

On the other side of the ball, Lawrence has been an absolute monster for the Cowboys. After serving a suspension in 2016 and vastly underwhelming when he suited up, Dallas’ top pass rusher has collected 7.5 sacks through four games. Most impressively, Lawrence has been consistent recording at least one sack in each contest. He’s on a torrid pace that would absolutely shatter the single-season record set by Michael Strahan (22.5).

Keeping up that level will become increasingly hard as teams key on Lawrence throughout the year. Unlike Hunt who has Tyreek Hill and Travis Kelce to lean on, Lawrence is the sole star on an otherwise mediocre Dallas pass rush. The AFC West alone has five players (Khalil Mack, Von Miller, Justin Houston, and LA’s pair of Joey Bosa and Melvin Ingram) that could all end the season as the league’s sack leader.

MORE LIKELY TO HAPPEN: Hunt ends the season as the rushing leader, because Lawrence has far more competition. These veterans couldn’t have envisioned this slow of a start when signing with their new teams. Peterson was expected to be the featured back on one of the league’s most high-powered offensive attacks. He had never played with a QB as talented as Brees (apologies to Brett Favre the Viking), and Sean Payton is one of the more clever offensive coordinators. A Week 1 revenge game against Minnesota was going to set the tone for another stellar year for AD.

It did in fact set a tone, just not a very good one.

Peterson has now totaled 81 yards on 27 carries through four games. His longest rush this season was an 11-yard scamper against the Panthers. He’s looked sluggish, and hasn’t been able to get his footing in a pass-happy scheme. The Saints have looked better in the past couple of weeks, holding Carolina and Miami to a total of 13 points. That sort of defensive play could potentially open up the possibility of keeping the ball on the ground more.

But who are we kidding, this is Sean Payton. He could have Jim Brown back there and would still choose to trot out five-wide sets on 1st and 10.

While the Saints have found ways to manufacture offense despite Peterson’s struggles, Marshall and the Giants have been abysmal all year long. Marshall figured to be the missing piece to a potential Super Bowl contender when he signed with the G-Men this offseason. They’ve struggled to integrate him into the offense, and are sitting at 0-4 in a tough NFC East. He’s gotten more looks in the last two weeks (21 targets), and put up his best game in an 8-catch/66-yard performance against the Eagles. Neither vet has eclipsed the century mark in over a year, making this an uphill battle for the elder statesmen.

FIRST TO HAPPEN: Marshall records a 100-yard game because the Giants won’t stop throwing him the ball until he does. 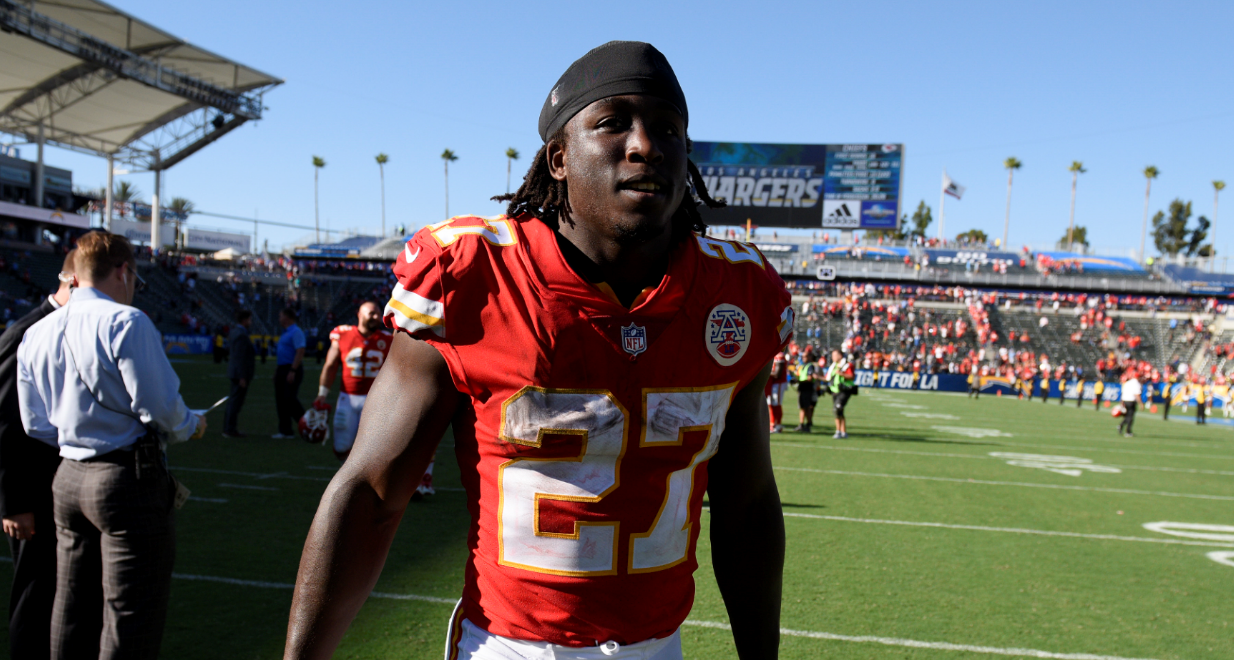