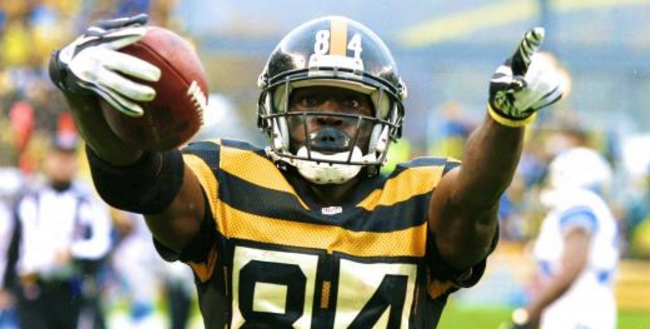 With only two weeks until the playoffs, it’s time for playoff hopefuls to put up or shut up. The Pittsburgh Steelers are right in the thick of the playoff chase, and thankfully for them, their quarterback is looking better than ever. With two rings already in his back pocket, Ben Roethlisberger appears poised to make another deep playoff run behind Pittsburgh’s scalding hot offense.

His receivers, specifically Antonio Brown, must be ecstatic that their star signal caller is healthy again. Big Ben missed four games earlier this season, which may ultimately cost Antonio his chance at breaking the all-time receiving record.

During that four-game stretch, Brown averaged 58.8 receiving yards while failing to score a touchdown. In the 10 games Roethlisberger has started, Antonio has averaged 135.1 yards per game while scoring nine touchdowns.

Stretching those numbers with Roethlisberger over the entire season, Brown would be on pace for 2,161 receiving yards and 14 touchdowns. Still, even with Landry Jones and Michael Vick throwing him the ball at various points this season, Brown has 1,586 yards on the season, which leads the NFL.

Only two players have attained 1,800 receiving yards in a single season (Jerry Rice and Calvin Johnson), and Brown will have two games to join that elite company. Whether he gets there or not, Brown has firmly established himself as the best wide receiver in football.

This past week, he made Broncos cornerback Chris Harris Jr. – a cornerback who hadn’t allowed a touchdown in two years – look mediocre en route to scoring two touchdowns. He’s caught 16+ passes twice in an individual game this season and has proven to be unstoppable.

As long as Roethlisberger and Brown are on the field together, the Steelers will be a team no one wants to face come playoff time.