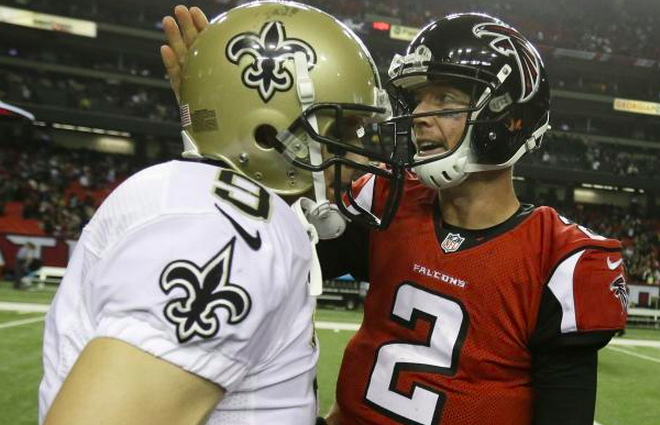 On Thursday evening, two teams heading in opposite directions face off. The Atlanta Falcons (5-0) will head to the Mercedes-Benz Superdome to take on the New Orleans Saints (1-4).

The Saints have looked flat-out awful. The Philadelphia Eagles destroyed New Orleans on Sunday in a 39-17 massacre. Meanwhile, Atlanta has looked tremendous. Matt Ryan, Devonta Freeman, and Julio Jones have created one of the deadliest three-headed monsters in football. The Falcons were able to edge out the Redskins last weekend in a 25-19 overtime win.

Here are the players to watch during Thursday Night Football:

Matt Ryan – Quarterback
He is finally evolving into a superstar for the Falcons. Even with a weak performance against Washington, expect Ryan to go off on Thursday. The Saints have a horrible defense and Ryan rules Thursday nights. He is 4-1 and has 10 touchdowns during Thursday Night Football.

Devonta Freeman – Running Back
The Florida State product is making everyone forget about Tevin Coleman. Atlanta’s run game hasn’t looked this good since Michael Turner in 2008. Freeman is the first player in the Super Bowl era to rush for at least seven touchdowns in his first three career starts, and should continue his dominant start against a putrid Saints rush defense.

Julio Jones – Wide Receiver
The only question is if he plays. If Jones is active, then watch out. A superstar facing a disappointing defense – we love it.

Drew Brees – Quarterback
There have been a lot of questions regarding Brees and his shoulder this year. He hasn’t looked himself but he is still regarded as a Hall of Famer. The Falcons should take a big lead on Thursday, so watch Brees air it out as New Orleans plays catch up.

Willie Snead – Wide Receiver
Who would have guessed that this kid would be the most productive wide-out for New Orleans this year? The team has a lot of weapons with Brandin Cooks, Marques Colston, and Brandon Coleman, yet somehow Snead has come out on top. Brees loves this target and he should be productive again on Thursday night.

C.J. Spiller – Running Back
The Clemson star has an amazing combination of speed, agility, and power. He is seen as the 3rd-down back, but if Atlanta gets out in front early, Spiller will be in line for a lot of touches.

Prediction: The Saints desperately need a win and their crowd will certainly be rocking on this nationally televised game. However, Atlanta just has too much firepower for the Saints to contend with. The Falcons win 27-17.