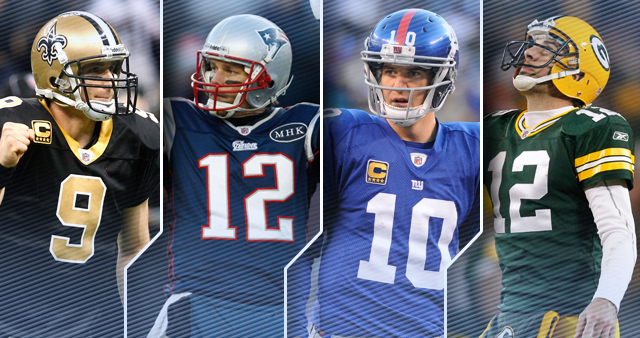 The NFL season is officially halfway complete, with most teams having played eight of their 16 regular season games (a few teams have played nine). We took a look at the quarter-season awards following Week 4, but now have a larger sample size to base our predictions on.

Let’s dive in and figure out who would be taking home the hardware if the season ended today. Brady is one of two players I have winning the same award from my predictions five weeks ago. Leading his Patriots squad to five straight victories since then, no one has come close to sopping him. This season, he has thrown for 2,709 yards (338.6 per game), 22 touchdowns and only two interceptions. Even at 38 years-old, he is in peak form and shows zero signs of slowing down (unlike a familiar foe of his). In the words of Ricky Bobby – “When [Tom Brady] wakes up in the morning, he pisses excellence.” If he keeps up this level of play, he is a lock for his third regular season MVP award. If the New England Patriots go 16-0, it’s going to be hard to avoid giving this award to Brady. Two of the last three MVP’s have also won this award. As for why he deserves it, see the previous paragraph. No, you did not read that wrong. The 39 year-old is having a career renaissance in his return to Oakland. Leading the league with five interceptions, Woodson has been the key cog in helping the Oakland Raiders return to respectability. Even though the Pittsburgh ‘Antonio Browns’ just thrashed the Raiders this past week, it wasn’t because of Woodson’s play. Oakland’s high-powered offense has been getting all of the attention, but if the Raiders sneak into the playoffs, Woodson should come away with his second career Defensive Player of the Year award. Todd Gurley has only played in six NFL games, and people are already wondering if he is the best running back in the league. In five starts, Gurley has 112 carries for 655 yards and four touchdowns. The sky seems to be the limit for the former Georgia product, as he is putting up these numbers alongside an extremely mundane Rams offense. This impressive debut suggests this won’t be the only award Gurley will take home in his NFL career. Darby has proven to be the biggest steal of this year’s draft class, as the Florida State alum was the seventh cornerback taken. Helping lead an elite Buffalo Bills secondary, Darby has already established himself as their best player. Darby is an excellent man-to-man defender, which has allowed Rex Ryan to blitz opponents as often as they do. With 44 tackles and two interceptions, Darby is quickly becoming one of the most feared cornerbacks in the league. The Carolina Panthers remain as the only undefeated team in the NFC, led by ‘Riverboat Ron’ can seemingly do no wrong. Coming off wins against the Indianapolis Colts and Green Bay Packers, Carolina has officially established itself as a legitimate Super Bowl contender. Much of that goes to Rivera, who continues to assemble elite defenses. Despite having very little talent on the offensive side of the ball (aside from Cam Newton), Rivera figures out ways to get the win. Unless Bill Belichick or Marvin Lewis leads their respective teams to an undefeated season, Rivera is more than deserving of winning this award for the second time in three years.