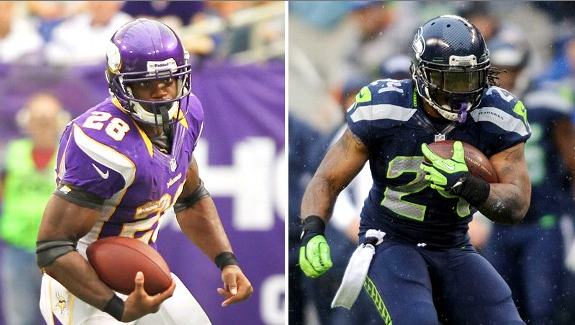 Although the temperature at kickoff is expected to be below freezing, the hype surrounding Sunday’s game between the Minnesota Vikings and Seattle Seattle has only heated up. Despite the fact that the Minnesota Vikings beat the Packers on the road in Week 17 and are hosting the Seahawks, they are still considered underdogs.

Fortunately for them, that may change with the news that came out of Seahawks camp following Friday’s practice.

Seattle star running back Marshawn Lynch practiced this week for the first time in over a month since getting abdominal surgery on November 25th. The whole team, and even ‘Beast Mode,’ thought he’d be able to play, but Lynch notified the team Friday that he won’t be playing this weekend. It’s a huge blow to the Seahawks, who will need an effective running attack to combat the freezing temperatures in Minnesota.

For as disappointed as the Seahawks are, so too should NFL fans. Earlier in the week, Vikings running back Adrian Peterson claimed that ‘Beast Mode’ is the second best running back in the league, right behind Peterson himself. His comments definitely added more hype to the match-up, but America will only see one of the two ball carriers in uniform.

As they’ve been doing since Lynch went down, Seattle will have to rely on its quarterback, Russell Wilson, to guide them to victory. Wilson ended the season on an absolute tear, including a stretch in which he threw 11 touchdowns to receiver Doug Baldwin over a 5-week period. It’s a change of pace for the Seahawks, but they shouldn’t have a problem with Wilson peaking right as they enter the postseason.

The Vikings had better hope Wilson doesn’t continue his hot streak, or it’s going to be another long, cold Sunday in Minnesota.