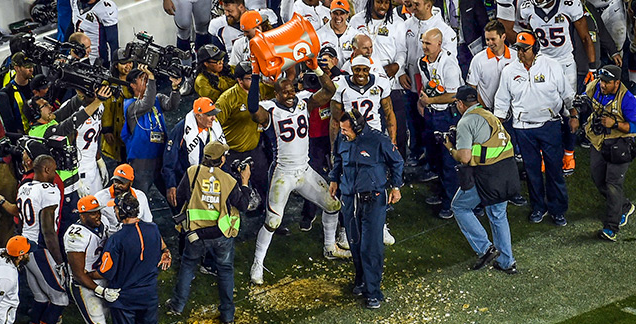 Super Bowl 50 was a lucrative game for the champion Denver Broncos, but Las Vegas took home the real money. That’s because a record $132.54 million was bet on the Panthers – Broncos showdown.

The house won $13.31 million according to the Nevada Gaming Control. The win for the casinos was the second biggest in the last decade — trailing only the 2014 Super Bowl when sports books won nearly $20 million after the Seattle Seahawks smashed Peyton Manning and the Broncos.

While Las Vegas benefited considerably, the president and CEO of the American Gambling Association, Geoff Freeman, revealed that an absurd $4.1 billion was estimated to have been bet illegally on this game. Freeman views the increased activity in legal and illegal bets as major progress for Las Vegas and sports gamblers around the world.

“The record amount wagered — legally and illegally — on Super Bowl 50 offers further proof that sports betting has become America’s new national pastime,” Freeman said. “Fans want to be invested in their favorite sports and, one way or another, they will find a way to do so. AGA will continue to build support for a modern and rational approach that protects these fans and the integrity of the sports we enjoy.”

The money splits between the Panthers and Broncos was much closer than initially expected. Earlier in the week, it was reported that a major amount of bets were being placed on the Panthers to take home the Lombardi Trophy. However, the line slimmed during the days before Super Bowl 50 due to a late push by the Broncos — including a six-digit bet placed on Denver.

Bets on the two teams via the point spread came close to being even with 51 percent of the money placed on the Panthers. But in the end, Vegas, and anyone else who placed money on the Broncos, came up big.