After 10 legendary seasons in Minnesota, Adrian Peterson may finally be relocating for the 2017 season. The Vikings’ all-time leading rusher got his option declined on Tuesday, allowing him to sign with any team when the new league year opens on March 9. Minnesota had until then to decide on his $18 million option, which also included a $6 million roster bonus on top of that.

With Peterson missing 13 games last season due to a torn meniscus, this emotional decision seemed inevitable given the massive financial commitment they’d have to make. AP has also dealt with serious injuries in the past, including a torn ACL and MCL in December of 2011. He then infamously returned for the start of the 2012 season and went on to win MVP behind one of the most prolific seasons by a running back in NFL history. However, durability concerns made it too risky for the Vikings to pay him that kind of money at age 32.

Considering he’s probably the best player in franchise history, both sides have acknowledged that there’s still the possibility of a reunion this season. “I spoke with (Vikings GM) Rick Spielman this past weekend,” Peterson said. “The door is still open to find some common ground.”

Given his stature in the league, it’s very likely than he could earn more money on the open market from another team. Other than Minnesota, here are 4 teams that should be interested in adding the NFL’s 16th all-time leading rusher to their roster:

Recently on ESPN’s First Take, Peterson named three potential teams that he’d have interest in playing for, one of which was Tampa Bay. It’s easy to see why they make so much sense for him, and they’ll likely become the favorite to land him once free agency starts. Coming off a subpar injury plagued year with a suspension looming, Doug Martin will almost certainly be cut from the Bucs this offseason, creating an obvious need for a starting running back. Considering how much they struggled to run the ball in 2016, AP would be an ideal complement to Tampa’s developing passing offense, led by youngsters Jameis Winston and Mike Evans. Most importantly, the Bucs have plenty of cap room to offer Peterson a hefty contract, putting them in the best position to acquire the future Hall of Famer.

The Giants were another one of the three teams that AP recently said he’d be intrigued by, and they’d be a great fit if he chooses to go there. In 2016, New York finished fourth worst in rushing yards and third worst in yards per attempt, forcing Eli to throw way more than he should at his age. They already released their starter from last year, Rashad Jennings, and if the season started today, second-year player Paul Perkins would be the lead back by default. As much as AP would shine under the bright lights of New York, the Giants might not possess the cap space necessary to make a quality offer, especially after putting the franchise tag on Jason Pierre-Paul. If they can find a way to free up a little more money, though, they’d easily become a top contender for Peterson’s services.

On the surface, this team might not make much sense. Dallas returns the NFL’s leading rusher from last year who’s also entering his second season. Dallas barely has any cap space at the moment – an issue which is further complicated by the timing of Tony Romo’s departure. They also have several pending free agents that they should probably focus on instead. But, the most important thing they have going for them is that Peterson really wants to play there. He was born in Texas and raised a Cowboys fan, and he’d love nothing more than to bring a Super Bowl trophy back to his home state. He already has plenty of miles on him, so it wouldn’t be the worst idea to transition into a backup role, especially if it preserves Ezekiel Elliott in the process. And, even though nothing has been announced yet, the NFL’s continued investigation into Elliott’s domestic violence case has to make the Cowboys at least a little nervous about his availability in 2017. He’d have to take a major pay cut for this to work, but if he has his heart set on becoming a Cowboy, now might be the best time to make the move.

How terrifying would this be? The defending Super Bowl champs have the chance to add the best running back of this generation to the same backfield as the best quarterback of all-time. Would Goodell immediately veto the signing out of respect for the other 31 teams in the league? Aside from how much sense it makes on the field, it also makes some sense for the Patriots financially. Even if he won’t make as much as Peterson, impending free agent LeGarrette Blount is due for a huge raise after leading the NFL in rushing touchdowns this past season. Given their history with free agents, it’s very possible the Pats don’t believe Blount to be worth the money that another team is willing to give him. And, although they have several free agents of their own to re-sign, New England will still have a solid amount of cap room to make this happen. It’d be a low risk, high reward signing if the Pats want to make a statement and add to their already illustrious dynasty. 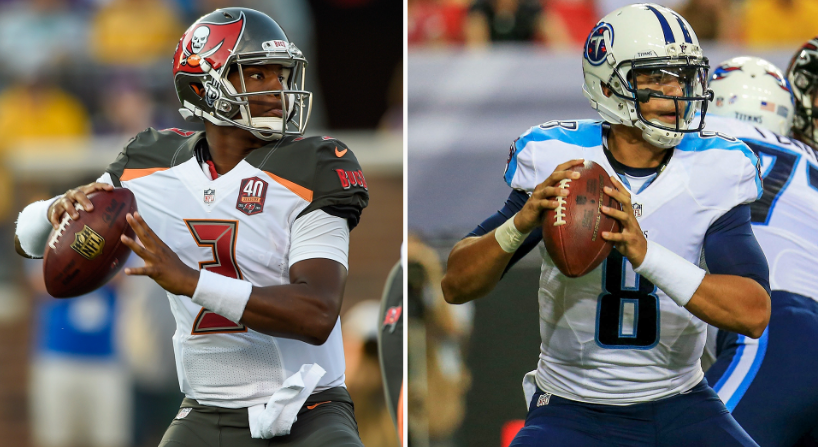 The 10 Best NFL Quarterbacks 25 and Under