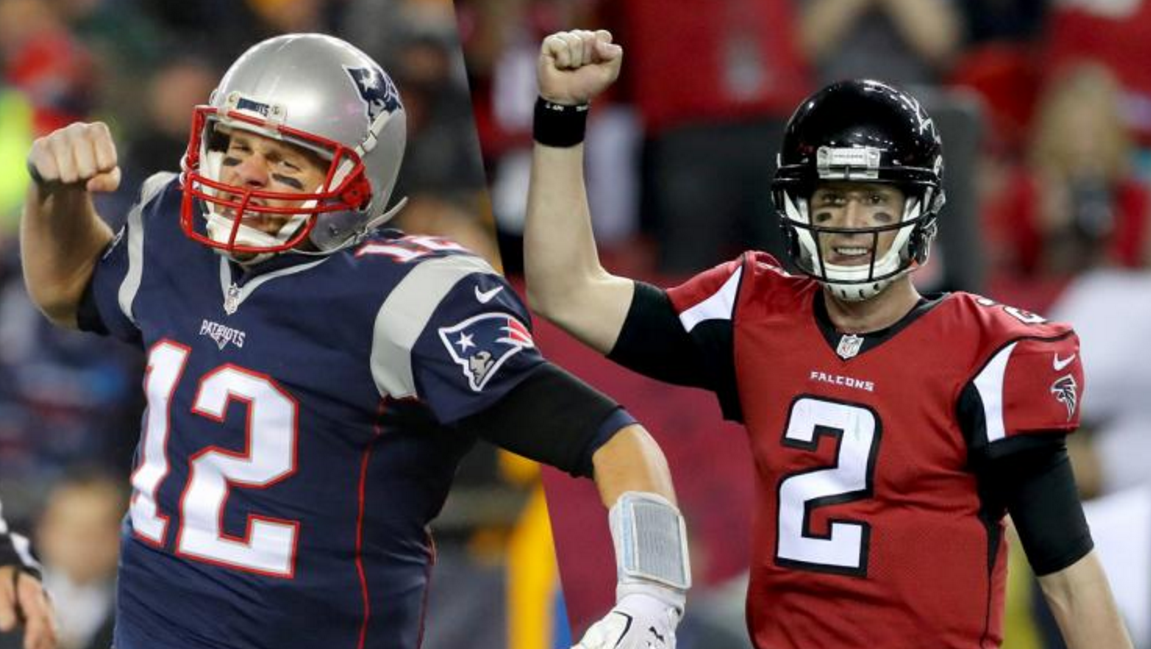 1. Coin Toss: Tails (-103) vs. Heads (-103)
In the previous six Super Bowls Tom Brady and the New England Patriots have participated in, the coin toss landed on tails four times. However, both times it landed on heads, it occurred when the coin toss had yielded the same result the previous three years. After three straight years of landing on tails (2014-2016), heads is the move.

2. Length of the National Anthem: Over (even)/Under (-140) 2 minutes, 15 seconds
On such an enormous stage with the whole country watching, betting the over on the national anthem is almost always the right move. But after backlash following Aretha Franklin’s 4 minute and 35 second rendition of the Star Spangled Banner on Thanksgiving Day, country superstar Luke Bryan won’t be looking to steal the spotlight.

The pick: Under 2 minutes and 15 seconds We get it – Tom Brady is friends with Donald Trump. But you know what Super Bowl commentators Joe Buck and Troy Aikman have no interest in discussing? Politics. Football’s biggest day of the year is going to focus exclusively on football.

4. Over/Under 30.5 points by New England Patriots: Over (-130)/Under(even)
While the Super Bowl normally evokes plenty of nerves, that notion doesn’t apply to Tom Brady. Entering his seventh Super Bowl against a Falcons defense that can’t be regarded as stingy, Brady and the Patriots should be able to move the ball down the field. New England has scored at least 34 points in each of its last four games and should have no problem extending the streak to five.

5. First offensive play of the game? Run (-130) vs. Pass (even)
Establishing the ground game will be important for both teams, but whoever gets the ball first will be trying to set the pace early. With both teams fired up, expect a play action pass to get the game started.

6. Over/Under 7.5 catches by Julian Edelman: Over (-120)/Under (-110)
It’s no secret Julian Edelman is Tom Brady’s go-to option. This notion holds especially true in the postseason, as Edelman has caught 8+ passes in seven of New England’s last eight playoff games. Facing a Falcons secondary that struggles against receivers in the slot, expect the former Kent State quarterback to make it eight of nine. In New England’s AFC Championship victory over the Pittsburgh Steelers, they made it pretty clear how they plan to defend an opposing team’s No. 1 receiver. Double teaming Antonio Brown for the majority of the game, New England will definitely try to do something similar against Julio Jones. Even though Brown still managed to haul in seven catches, Pittsburgh didn’t boast the complementary receivers Atlanta has. With Matt Ryan perfectly happy exploiting New England’s defense while Jones acts as a decoy, the All-Pro will fall just short of this number.

The pick: Under 6.5 catches

8. Over/Under 2.5 turnovers in the game: Over (even)/Under (-130)
Shaping up to be one of the greatest offensive showdowns in Super Bowl history, much of New England’s and Atlanta’s success can be attributed to their ability to protect the ball. The two teams tied for the league-low with only 11 giveaways each, as both quarterbacks do a magnificent job avoiding forced throws. Combine that with two defenses who didn’t crack the top 10 in takeaways during the regular season, and this one is an easy under.

The pick: Under 2.5 turnovers

9. Who will have more passing yards in the game? Tom Brady (+130) vs. Matt Ryan (-160)
Both quarterbacks enter this game on fire. Matt Ryan has averaged 365 passing yards per game in the playoffs, while Tom Brady has only averaged 335.5 yards. With both guys looking unstoppable, this one comes down to experience and who is facing the weaker defense. Since Tom Brady wins both categories and is still being listed as the underdog, he’s the right bet. This one will be a shoot-out, meaning neither team will have any trouble moving the chains. However, New England possesses the more methodical, less dynamic offense, while Atlanta has plenty of playmakers that can rattle off 50+ yard touchdowns. With the Patriots more likely to slowly march down the field on scoring drives, they’re the correct choice.

11. Will a 2-point conversion be attempted in the game? Yes (+120)/No (-150)
With nerves at an all-time high for both teams, things always get weird in the Super Bowl. Add in the fact that extra points are no longer automatic chip shots, and it feels more likely than not that a crucial two-point conversion in this tightly contested affair will take place.

12. Over/Under 1.5 turnovers by New England Patriots: Over (+135)/Under (-165)
Once again, the Patriots don’t turn the ball over, and the Falcons don’t generate turnovers. With New England razor-focused and ball security never being an issue, punts are the only way the Patriots will be giving the ball to Atlanta.

The pick: Under 1.5 turnovers In the regular season, Bill Belichick only threw the red challenge flag once in 16 games. That’s not to say there won’t be some egregious call that leads to him tossing the flag 20 seconds into the game, but if the 2016 season is any indication, that red flag isn’t leaving Belichick’s pocket in this one.

14. What will be the last scoring play of the 1st half? Touchdown (-165) vs. Field goal/safety (+135)
These teams are going to score plenty of touchdowns, but the clock may not always be on their side. With both teams excellent at running the two-minute drill, I expect either team to drive down the field, but ultimately lean on Matt Bryant or Stephen Gostkowski to end the half with three points.

15. How many touchdowns will Tom Brady throw? 0 (+1042) vs. 1 (+607) vs. 2 (+165) vs. 3 (-102) vs. 4 or more (+420)
New England has been lethal running the ball in the red zone this year, as plodder LeGarrette Blount led the league with 18 rushing touchdowns during the regular season. However, the Patriots still throw inside the opponents’ 5-yard line quite often, meaning Brady is going to tally plenty of touchdown tosses. With New England likely to win the time of possession battle, I like the Patriots’ odds of scoring five touchdowns – four of which come courtesy of Brady’s arm.

The pick: 4 or more touchdown passes Between Peyton Manning’s endorsement deals with Papa John’s and Nationwide, that’s already two guaranteed commercials. This one is a lock.

The pick: Over 1.5 commercials

17. Which half will have more points? 1st half (even) vs. 2nd half + Overtime (-130)
Neither team has had any trouble finding their groove in the first half this postseason. The Falcons are averaging 21.5 points and New England is averaging 17 points after two quarters of football, but I don’t expect either team to be as sharp with so much on the line. With both teams playing a little tight for the first 30 minutes, halftime adjustments and some calmed nerves will lead to a higher scoring second half.

The pick: 2nd half + overtime

18. What will be the highest scoring quarter? 1st quarter (+400) vs. 2nd quarter (+150) vs. 3rd quarter (+350) vs. 4th quarter (+250)
Piggybacking onto the previous one regarding both teams failing to play their sharpest football in the first half, the third quarter is when the fireworks will really begin. With both offenses in a solid groove and the clock not impacting any play calling, the third quarter will produce more points than any other.

19. What color Gatorade will be dumped on winning coach? Orange (+480) vs. Red (+370) vs. Blue (+315) vs. Green (+1650) vs. Yellow (+330) vs. Water (+230) vs. No Gatorade/Liquid (+1100)
First of all, eliminate the option of no Gatorade/liquid. The winning team shouldn’t be allowed to hold the Lombardi Trophy until Bill Belichick or Dan Quinn has been drenched in a very cold liquid. Second of all, since when is there green Gatorade? I consider myself a Gatorade aficionado, and I’ve never had it, so we can rule that option out too. After New England dumped blue on Belichick in 2015 and Denver dumped orange on Gary Kubiak in 2016, logically, teams seem to choose the color they dump on their coach carefully. With blue (Patriots) and red (Falcons) being the only logical options, I see the Patriots winning their fifth Super Bowl in the Belichick-Brady era. On the precipice of adding another Lombardi Trophy to the most dominant era in NFL history, it’s hard to imagine a scenario in which the Patriots win and Brady isn’t handed the MVP trophy. Cornerback Malcolm Butler quite literally saved the game with his interception at the 1-yard line against the Seahawks in Super Bowl 49, yet it still wasn’t enough to keep Brady from winning the MVP. It’s impossible for any Patriot to make a more MVP-worthy play in this one, and the league always has an affinity for giving the trophy to the winning quarterback. Add in my predictions regarding Brady tossing 4 touchdowns and throwing for more yards than Matt Ryan, and it results in Super Bowl 51 cementing Brady’s legacy – with MVP trophy in hand – as the greatest quarterback of all-time.