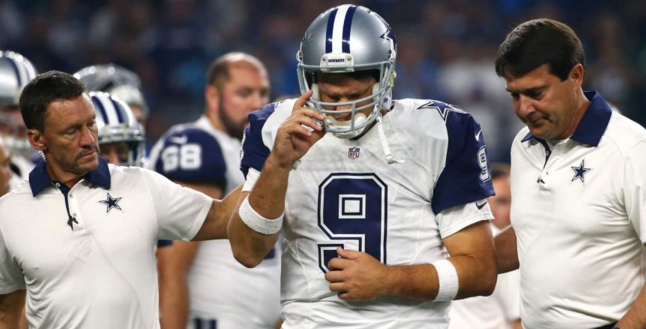 This was not a Thanksgiving for the Cowboys to remember. Somehow still in the NFC East playoff picture heading into the game, the Dallas Cowboys were in “desperation mode” as the Carolina Panthers entered ‘Jerry’s World’ Thursday.

From the get-go, Carolina was in full control. A pick-six by safety Kurt Coleman on Romo’s second pass of the game was just the start. After back-to-back interceptions on consecutive plays by Luke Kuechly (one of which was returned for a touchdown) in the second quarter, Cowboys fans were left wishing Romo never returned from injury.

While the Panthers’ defense pummeled Dallas, their offense certainly didn’t show any mercy. After Romo’s third interception of the first half, Cam Newton led his squad down the field to balloon the lead to 23-3 at halftime.

Little did Dallas know, things were only going to get worse.

It’s never good when the best thing for the home crowd was the halftime performance. That was the case for the Cowboy faithful, as country star Luke Bryan was the only Dallas member who met expectations.

The second half was plagued by injuries for “America’s team.” For what feels like the 35th time in his career, running back Darren McFadden went down with an injury, but that was just the beginning. While the realization that Robert Turbin was the only remaining running back was devastating, it paled in comparison to watching Tony Romo get sacked by Panthers’ linebacker Thomas Davis. Landing on the same left clavicle that broke in six places in Week 2, the entire crowd went silent as Romo headed to the locker room.

This season is essentially lost for the Cowboys, and the Romo injury should propel Jason Garrett and Co. to wave the white flag.

On the other end of the gridiron though, the Panthers can be seen waving their white towels in celebration. At a flawless 11-0, Carolina continues to prove they are the NFC’s top team, despite skeptics constantly suggesting otherwise.

It was a dominant performance helping justify Ron Rivera as the frontrunner for the Coach of the Year Award, Josh Norman as the clear Defensive Player of the Year, and Cam Newton rivaling Tom Brady for MVP honors.

This team doesn’t just have a perfect season on their mind – it is Super Bowl or bust for a team who has never taken home the Lombardi Trophy.