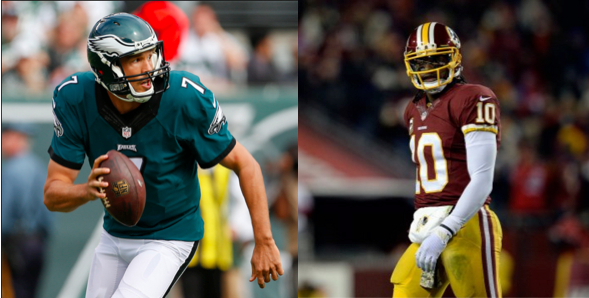 The Philadelphia Eagles are set to make a major splash in the 2016 NFL Draft. On Wednesday, the team took a page out of the Los Angeles Rams’ book with a blockbuster deal to acquire the No. 2 overall pick.

The Eagles agreed to a deal with the Cleveland Browns that will involve Philadelphia giving up the 8th, 77th and 100th selection in this year’s draft, along with their 2017 first-round pick and a 2018 second-round pick. In addition to the No. 2 pick in this draft, the Browns will also send a 2017 fourth-round pick to Philadelphia.

Ironically, a few seasons ago, a trade of this magnitude was made for Robert Griffin III. The 2011 Heisman Trophy winner is now the quarterback in Cleveland and is the main reason the Browns felt comfortable departing with the second overall selection.

Since the top two picks are virtually guaranteed to be quarterbacks Jared Goff and Carson Wentz, Tennessee’s and Cleveland’s decisions to trade out of the top two slots are a strong indication that they are comfortable with their current signal callers.

While the Rams are desperate for a quarterback sitting with the No. 1 pick, the move is a bit more surprising by the Eagles. They currently have Sam Bradford at the helm, but mortgaging so many future draft picks to acquire Goff or Wentz indicates the front office doesn’t view him as the long-term solution.

Despite the potential logjam at quarterback, Eagles executive vice president of football operations, Howie Roseman, tried to clear up any confusion by stating “Sam Bradford is our starting quarterback.”

And while that situation may hold true for the beginning of the 2016 season, it’s clear Bradford will spend the rest of his time in Philadelphia checking over his shoulder.