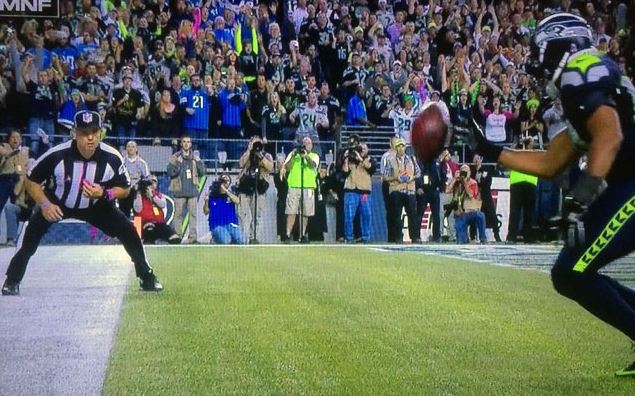 When it comes to playing at CenturyLink Field, the deafening crowd is commonly referred to as Seattle’s ‘12th man.’ But based on recent Monday Night Football games on Seattle’s home field, it sure seems like that 12th man is the officiating crew.

The infamous 2012 ‘Fail Mary’ against the Green Bay Packers was such a monumental mistake that it led to the end of the replacement referee era. It remains to be seen what the after-effects will be of this batted ball controversy.

Down by three with 90 seconds left, Lions wide receiver Calvin Johnson reached for the end zone but had the ball knocked out by Kam Chancellor before he crossed the plane. With the ball loose in the end zone, Seahawks linebacker K.J. Wright batted the ball out of the end zone to ensure that no Lions player would recover the fumble for a touchdown.

Intentionally swatting the ball out of the end zone is a penalty, but the referee with an entirely unobstructed view claimed that Wright did not hit the ball out on purpose. Coincidentally, this referee was the only person in America who saw it that way. Even Wright himself admitted to intentionally hitting the ball, which would have given the Lions the ball at the 1-yard line (as a result of the penalty).

It’s hard to determine whether this was typical bad luck for Detroit, or the kind of miraculous play that has become the norm for the Seahawks.

With a propensity for the dramatic on Monday Night Football, the Seahawks once again escaped with a controversial win. Luckily for fans of the other 31 teams though, the Super Bowl isn’t played on Mondays.