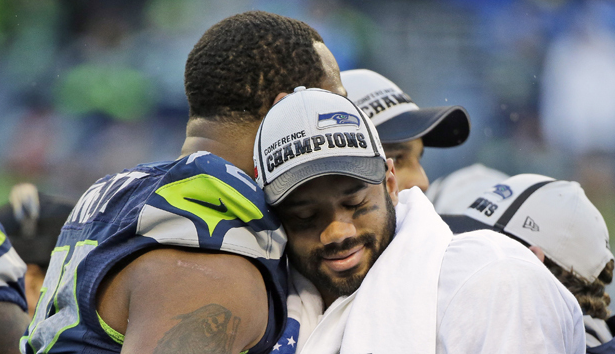 When asked about Wilson, Pettine said, “Would you put him there with the guys that can transcend their supporting cast? The [Tom] Bradys, whether it’s Aaron Rodgers, [Drew] Brees, [Ben] Roethlisberger, the ones that you would consider the two, three, four elite guys? No. But he’s certainly played himself into that next tier.”

Pettine is entitled to his opinion, but no one is playing better football at the quarterback position right now than Wilson. In his last four games, he has thrown for 1,171 yards, 16 touchdowns and zero interceptions.

Bennett responded to Pettine’s slight knock on Wilson with a jab at the coach. Telling 710 ESPN Seattle “obviously he’s not good at picking quarterbacks,” Bennett has a pretty good point.

Since Cleveland’s head coach took over in 2014, he has had Brian Hoyer, Connor Shaw, Johnny Manziel, Josh McCown and Austin Davis lead his offense. With a combined record of 10-19, one would think Pettine would fawn over a player like Wilson.

With the former Wisconsin Badger in the midst of his greatest stretch as an NFL quarterback, the last thing Pettine needed to do was give the Seahawks extra motivation. Heading to CenturyLink Field this week to take on Wilson and Co., Pettine and the Browns can’t feel too good being led by the consistently inconsistent Johnny Manziel.

By the end of this game, Pettine will change his assessment on which quarterback tier Russell Wilson actually belongs in.