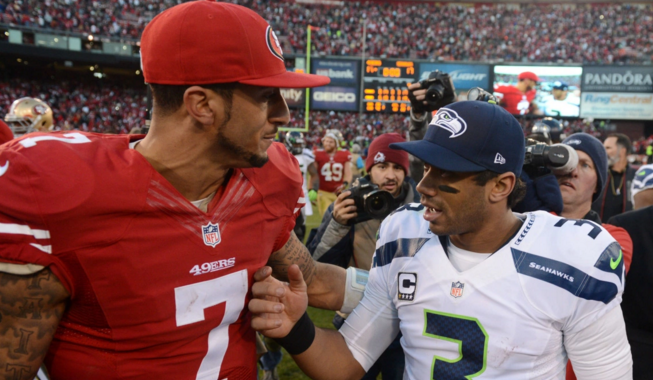 Before the season started, no one would have guessed that both the Seattle Seahawks and the San Francisco 49ers would be 2-4 heading into their Week 7 match-up.

The Seahawks are coming off a devastating home loss to the Carolina Panthers, while San Francisco narrowly escaped with a victory over the Baltimore Ravens.

The NFC West is still up for grabs after the Arizona Cardinals (4-2) fell to the Pittsburgh Steelers, meaning this matchup now has more than just rivalry implications. If either team wants to rise in the conference standings, it starts this Thursday night.

Here are the key players to watch during Thursday Night Football:

Russell Wilson – Quarterback
There is nothing this young quarterback can’t do… except play behind a solid offensive line. It seems every time Wilson drops back to pass, he has to scramble around, dig into his magic hat and try to pull off a miraculous play. If Seattle wants to win, they will need to protect their franchise quarterback.

Jimmy Graham – Tight End
He is finally starting to get the targets he desired. Graham is a freak athlete and needs to get the ball in his hands. Seattle must continue to find ways to feed their No. 1 receiving threat, because Doug Baldwin and Jermaine Kearse don’t scare too many defenses.

The Legion of Boom – Defense
The blown coverage allowing Greg Olsen to catch the game-winning touchdown at the end of their last game was flat-out awful. Seattle’s defense struggled to slow down an offense whose No. 1 receiver is Ted Ginn Jr. Must I say more? On Thursday, if Seattle’s secondary doesn’t patch things up, veterans Anquan Boldin and Torrey Smith will tear them up (a statement that hasn’t been said since 2012).

Colin Kaepernick – Quarterback
Kaepernick is finally starting to step up after a horrific start to the season. He’s had back-to-back great starts against the Giants and Ravens, throwing for over 600 yards, four touchdowns and zero interceptions. However, Thursday should be different against a stingy Seattle defense. If the 49ers are to have any chance of winning, Kaepernick will need to continue his recent surge.

Carlos Hyde – Running Back
His foot is in a lot of pain, but the running back said he is planning on playing Thursday night. The Ohio State product is definitely a strange case like his relatives Dr. Jekyll and Mr. Hyde. Consistency is not his friend, as he either looks like the best running back in the league, or a guy who shouldn’t be playing in the NFL. History suggests he tends to be more efficient when he receives at least 20 touches. If San Francisco wants to win, they will need to feed their bell-cow.

The Turf – Levi’s Stadium
This is no joke. The field conditions are atrocious. For a field that is supposed to be the site of Super Bowl 50, it sure needs a ton of help. In the preseason, Tony Romo didn’t want to play because the turf was in such bad shape. Last week, Ravens kicker Justin Tucker missed a routine field goal after slipping in a pothole. Watch the match-up this week, as both squads play physical football that is usually decided by bizarre circumstances.