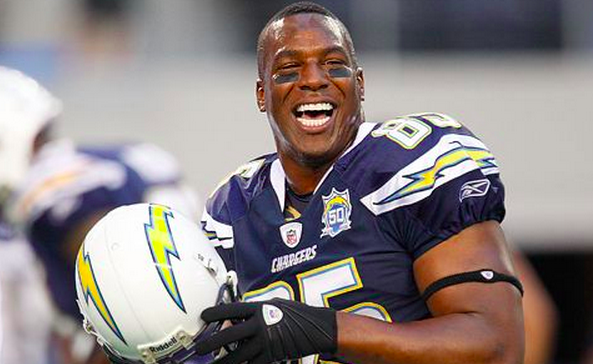 When the Chargers take the field during their Monday Night Football showdown with the Pittsburgh Steelers, they will finally have the help of Antonio Gates. The tight end was suspended for the first four games after failing a drug test in July. Gates says he didn’t know how he could have failed – a classic excuse used by NFL players hoping to re-up their credibility.

But Shannon Sharpe, another Hall of Fame tight end, told the media he believes Gates’ legacy is now tarnished following this suspension. Sharpe questioned the legitimacy of Gates’ career – one that is certainly Hall of Fame worthy.

Gates isn’t far behind Sharpe, as he has amassed 10,014 receiving yards during his career which has been played entirely with the San Diego Chargers. He only needs 47 more yards to pass Sharpe and move into third place all-time for tight ends.

The two have been exchanging jabs back and forth since the suspension. It’s clear Sharpe feels threatened by the ex-basketball star from Kent State University.

Four weeks into the season, the Chargers need Gates now more than ever. Stevie Johnson is out with a bum hamstring and Malcom Floyd is questionable to play with a concussion. While Ladarius Green has been a solid contributor to the Chargers’ passing game, he is nothing compared to the box-out expert.

San Diego should have plenty of opportunities for Gates on Monday night. The Pittsburgh Steelers offense is extremely one-dimensional at this point. Can Michael Vick stop turning over the ball? Mike Tomlin doesn’t think so. They’re going to keep it in Le’Veon Bell’s hands as much as possible, meaning the Chargers defense should be able to stack the box and limit Pittsburgh’s offense.

With the Chargers likely holding possession for the majority of the game, it should result in a big night for Gates. He has a chip on his shoulder, has been fueled by Sharpe’s remarks, and will be a significant option for Philip Rivers. Gates should have a touchdown, and at the end of the game, we will get to see Rivers rocking his victorious bolo tie.