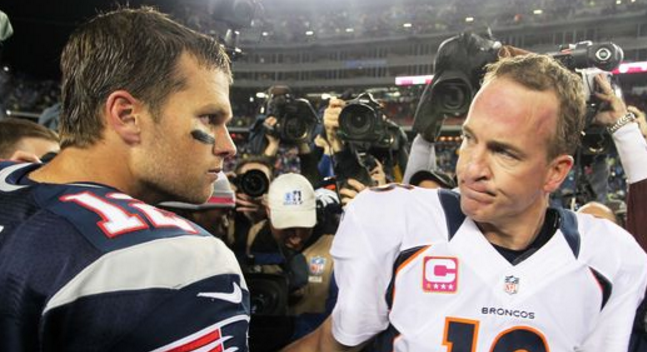 Brock Osweiler has a major challenge on his hands when the Denver Broncos take on the New England Patriots this Sunday night. The unbeaten Pats travel to Mile High Stadium with their star quarterback fully healthy. Meanwhile, the Broncos will have to try and improve on their 8-2 record without Peyton Manning at the helm. Osweiler looked solid in his first start at quarterback, but even with nagging injuries, one has to wonder if the Broncos stand a chance against the best team in the league.

Here are the players to watch during Sunday Night Football:

Peyton Manning – Quarterback
His mind is much stronger than his body at this point (we hope). Even though Manning won’t take the field, Brock and the Broncos need Peyton’s brainwork. His spine should stay in tact on the sideline, so Osweiler will have plenty of Hall-of-Fame advice.

Brock Osweiler – Quarterback
He’ll get an ear full the whole game, especially since he is facing a familiar Peyton Manning foe in the Patriots. Osweiler will have to take the field with a ton of confidence if he has any hope of dethroning Mr. Brady. Nonetheless, expect a solid game from the Arizona State University product.

The Entire Denver Defense
Slowing down Terrific Tom will not be easy by any means. However, Wade Phillips’ unit plays the kind of “smash-mouth” football necessary to make life difficult for New England’s offense. Denver will have to be extremely physical to keep their team in the game.

Tom Brady – Quarterback
Is there really anything to say? He’s the best quarterback in the league and appears poised for his third MVP. Still, he has his toughest game of the season against a stingy Denver defense. He will need to protect the ball and be extremely accurate against a ball-hawking Denver secondary.

Rob Gronkowski – Tight End
The Pats have a ton of injuries including Dion Lewis, Julian Edelman, and Danny Amendola. That leaves Gronk as Brady’s most reliable target, meaning he will need to beat linebackers, cornerbacks and safeties in man-to-man coverage. Expect a massive stat-line.

Brandon LaFell – Wide Receiver
He’s the only healthy wide receiver that has any experience with Brady. The LSU product will see a lot of targets, even with Aqib Talib on his back. With Gronk likely to be double-covered, LaFell could end up as the star of the game.

Prediction: NE (21) – DEN (20)
As sad as it is to say, the Broncos actually have a better chance with Peyton Manning on the sidelines. Osweiler should ride the home crowd and keep this one close, but Brady will be too much and lead his team to a perfect 11-0.