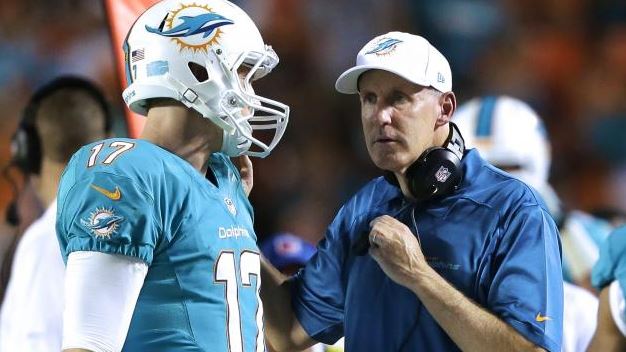 With each passing day, it feels as if the Miami Dolphins’ saga gets sadder. After a sluggish 1-3 start to the season, Miami unsurprisingly fired head coach Joe Philbin. In three full seasons from 2012-2014, Philbin’s squad failed to ever win more than eight games, and that certainly didn’t seem like it was going to change this season.

While this firing seemed inevitable, the latest stories circling in Miami are even uglier. Franchise quarterback Ryan Tannehill is now in the headlines, with reports surfacing that he often berates practice squad players after they intercept his passes. Shouting things like “enjoy your practice squad paycheck” and constantly belittling his teammates, Tannehill doesn’t seem to be the kind of player capable of leading an NFL franchise. As if it couldn’t get funnier, it’s rumored that Philbin actually told the practice squad to go easy on Tannehill to prevent the Dolphins quarterback from losing confidence in himself.

Perhaps part of the reason the Dolphins offense has struggled so much this season is that they are playing against opponents giving maximum effort. If Philbin could have convinced the Washington Redskins, Jacksonville Jaguars, Buffalo Bills and New York Jets to use their practice squads, he might still have a job, and the Dolphins could be 4-0.

Obviously the Miami Dolphins have bigger issues than the treatment of the practice squad. But only a few years removed from the Jonathan Martin bullying scandal, you have to wonder if Tannehill might have learned a bit too much from Richie Incognito.

It’s quite possible a coaching change is all the Dolphins need to live up to their immense potential, as interim head coach Dan Campbell announced his primary focus will be to ‘change the culture’ (never heard that line from a new head coach). The practice squad players might be safe from Tannehill’s harassment under Campbell’s regime, but there’s no telling who the franchise quarterback will berate next.

Watch out Dolphins water-boy, it could be you.