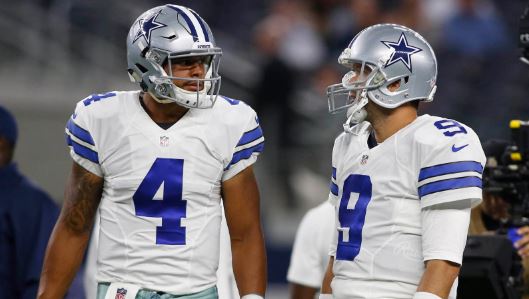 The NFL season hasn’t even kicked off yet, and the Cowboys already find themselves in a familiar position – without starting quarterback Tony Romo. The franchise cornerstone broke a bone in his back during an awkward slide/tackle from behind against the Seattle Seahawks, and will miss the next 6-10 weeks.

Dallas has lost 13 of its last 14 games started by a back-up quarterback, but if the preseason is any indication, there may be no reason to panic. Rookie Dak Prescott hasn’t just been the best rookie of the preseason, he’s arguably been the best player.

Through three preseason games, Prescott leads the league in passing yards (454 yards), passing touchdowns (5), completion percentage (78 percent) and quarterback rating (137.8). Showing poise in the pocket and the mobility that made him so lethal at Mississippi State, Prescott looks ready to be the team’s starting quarterback.

Perhaps most important, everyone within the organization feels as if Prescott can lead the team during Romo’s absence. That confidence extends to Romo himself, as executive VP Stephen Jones had this to say on the matter:

“(Romo) feels very confident our team can win games without him while he’s not here. He’s driven to help Dak win football games for us so when he gets back we have a great chance to have a great season, get in the tournament and contend for a championship. Nothing has changed.”

Playing in the weak NFC East should only help Prescott get acclimated, as the Cowboys should still be considered the favorites to win the division. Flanked by an outstanding offensive line, Dez Bryant, Jason Witten and rookie Ezekiel Elliot, Prescott has the necessary talent around him to be successful.

All he has to do is not screw it up.