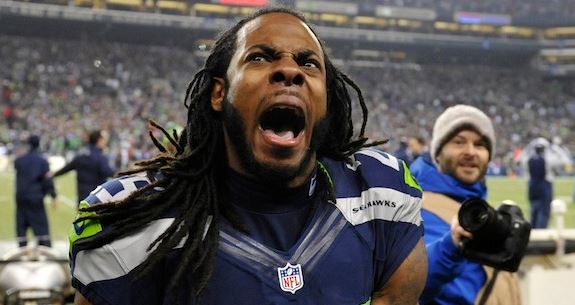 Seattle Seahawks cornerback Richard Sherman has never been one to keep his opinions to himself, and that reputation doesn’t seem likely to change anytime soon. The outspoken defensive back had some harsh words for NFL Commissioner Roger Goodell and his proposed rule changes.

Goodell recently shared that he is in favor of a new rule that would eject a player for committing two personal foul penalties in a single game. When asked about the topic, Sherman said, “I think it’s foolish.”

The former Stanford product continued, “But it sounds like something somebody who’s never played the game would say, something that they would suggest, because he doesn’t understand. He’s just a face. He’s just a suit. He’s never stepped foot on the field and understood how you can get a personal foul.”

The rule would have little to no impact on Sherman personally, as he has only committed three personal fouls in his five-year career. However, the bold comments simply serve as Sherman’s latest outburst regarding his displeasure with Goodell.

But even though Sherman might not be directly impacted by the new rule, the Seahawks defense as a whole certainly would be. Seattle’s physical, hard-nosed defense would have to dial back the aggressiveness that consistently makes them Super Bowl contenders.

And with player safety precautions now at an all-time high, perhaps Goodell’s suggestion isn’t as terrible as Sherman is making it out to be.