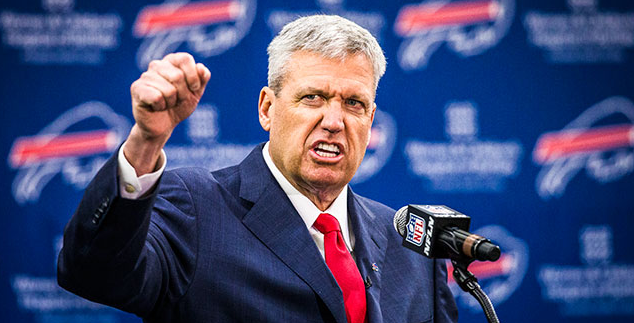 After weeks of unexciting Thursday Night Football, we finally have a match-up worth watching. The New York Jets (5-3) and the Buffalo Bills (4-4) kick off Week 10 action in MetLife Stadium. This in-state rivalry has major implications, as both teams are fighting for a playoff spot. As Rex Ryan returns to see “Gang Green,” this match-up is about more than just vengeance.

Here are the players to watch this Thursday evening:

Rex Ryan – Head Coach
He’s back! The coach that was tabbed as having a tattoo of his wife wearing a Mark Sanchez Jets jersey is making his way back to MetLife. He’s definitely going to draw up something crazy and will have plenty of motivation to help him out. Don’t underestimate how much he will be booed this game.

IK Enemkpali – Defense
The man that socked Geno Smith in the jaw has been named a captain for the Bills during Thursday night’s match-up. It just goes to show that head coach Rex Ryan is dialed in. This has the potential to be the most exciting coin toss in NFL history – all we need is for the Jets to send out their injured quarterback.

Karlos Williams – Running back
LeSean McCoy might not play in this one and even if he does, he’s going to be limited. Williams is spectacular and has shown a ton of potential this season. He’s coming off an impressive 110 yard, two touchdown performance against the Miami Dolphins. Williams should make Buffalo fans forget about “Shady” McCoy.

Ryan Fitzpatrick – Quarterback
There has been a lot of talk about his hand in recent weeks, but the Harvard graduate was stellar last time out against the Jaguars. Reports speculate he will have surgery on his thumb the day after this game (giving him 10 days to rest), and his return will be imperative if the Jets are to make the playoffs. Nobody can afford to bank on Geno Smith.

Chris Ivory – Running back
Both teams feature solid defenses, but New York must get the running game going if they want to pull this one out. Ivory has struggled mightily to get yardage in his last three match-ups. If the Jets are to move the ball on offense, they need to create some running room for their bruising running back.

Darrelle Revis – Defense
The man that runs the defense is going to try and shut down a decent offense. He’ll be on the prowl Thursday and will hopefully have multiple stare downs with Rex Ryan. Bills receiver Sammy Watkins will find himself on “Revis Island,” forcing the Bills to win by running the ball against a stingy rush defense.