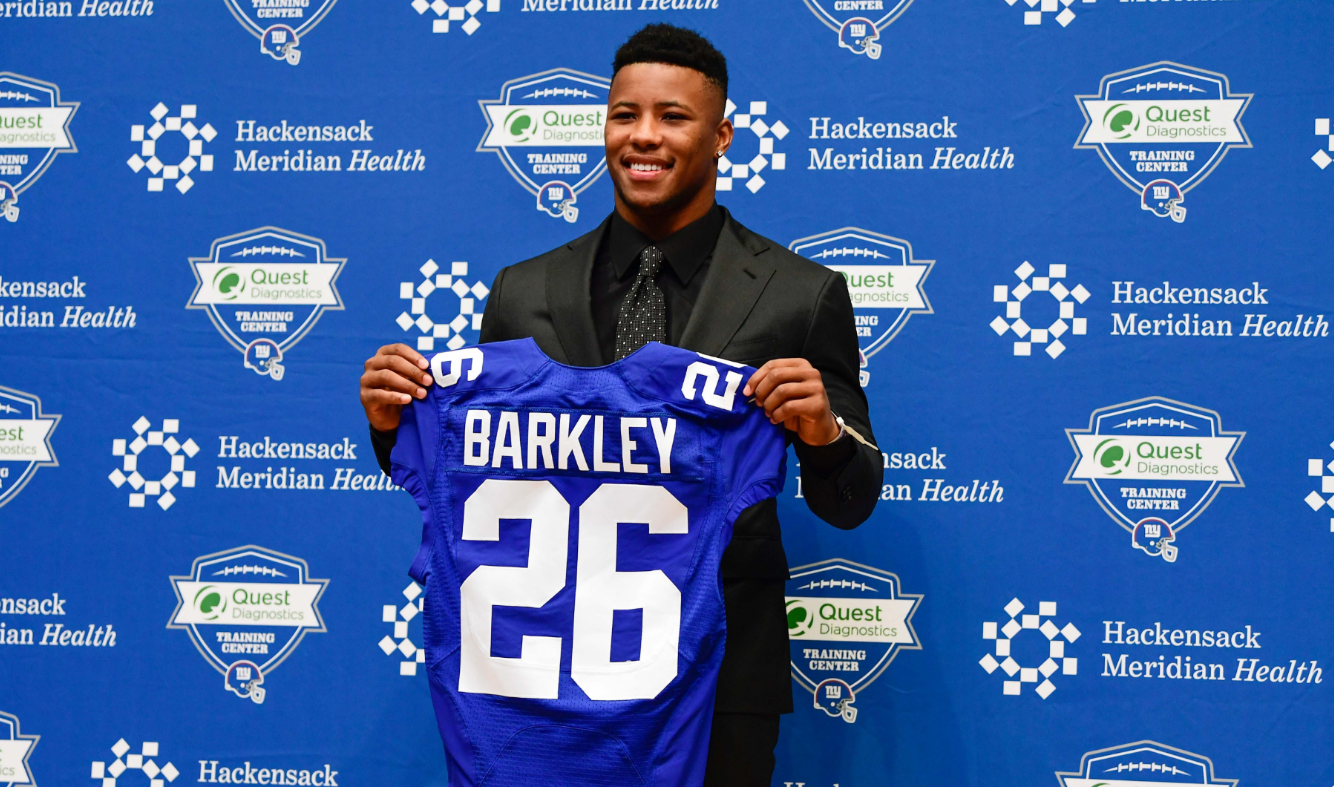 Barkley’s combination of talent and available opportunity makes him the clear-cut top choice among first-year players. There’s precisely zero chance the Giants spent the No. 2 overall pick in April’s draft on a back-up. Barkley will get his shot to shine early and often, as new head coach Pat Shurmur will attempt to get New York’s rushing attack kick-started.

The Penn State product is a freak of nature — equipped with all-world speed, strength and size. His powerful lower base allows him to run by or over even the toughest of defenders. He not only projects as a plus-runner, but also a threat catching passes out of the backfield. This facet makes him especially valuable in PPR-formats. Barkley is the early favorite to take home Rookie of the Year honors, and thus is worth a look in the first round of your fantasy draft.

No team got less help from their running backs last season than the Seahawks. In desperate need of a jolt, the Seahawks spent a first-round pick on All-American tailback Rashaad Penny. Penny, a backup until his senior year at San Diego State, is more than ready to step in as their lead back. He’s a smooth, decisive runner in the open field. Penny also has value as a functional kick returner. Russell Wilson traditionally has been more than willing to drop it off to his check-down options — as evidenced by Seattle backs totaling 79 receptions last year. Penny will challenge Barkley for the top spot by season’s end.

Jones is the home-run hitter of this group. He may not enter the year as Tampa Bay’s lead back. However, head coach Dirk Koetter will be forced to give him the ball as often as possible. Jones is lethal in space when given opportunities to make defenders miss and use his breakaway speed. His style is reminiscent of former Kansas City burner Jamaal Charles. Jones’ value is intensified in dynasty leagues while he develops alongside his young teammates Jameis Winston and Mike Evans.

The Patriots always have something up their sleeve. Even with Michel’s more accomplished teammate (Nick Chubb) on the board, New England opted for the shiftier Georgia Bulldog instead. He can rip off chunk yardage in a heartbeat, and is a match-up nightmare across the field. Despite only hauling in nine receptions his senior year, there’s no reason to shy away from Michel in PPR-leagues. Number aside, it’s hard to believe Bill Belichick took a running back in the first round that he has no intention of using in the passing game.

Michel will get his touches one way or another, and will have plenty of opportunities to score in New England’s potent offense.

Guice falling in the draft may have been the best thing for fantasy owners. He landed on a team with few roadblocks to the lead back role. Rob Kelley and Samaje Perine are replaceable, and Chris Thompson is best suited as a passing-down back. Guice could work in on the early downs, and earn even more work when he flashes his frightening talents. The former LSU standout is an authoritative, violent runner.

The highest Alex Smith has ever finished a season in passing attempts is 14th (in his rookie year). Expect Washington to ramp up its run game (and involve Guice plenty).

Denver suddenly has a running back competition after the surprising offseason release of C.J. Anderson. Devontae Booker appears to be on track to win the starting job. However, he’s not a special talent by any stretch of the imagination. The rest of the running backs stable includes a slew of practice squad candidates as well as this years’ third-round pick, Royce Freeman. Freeman is another guy that runs with power. He will quickly endear himself to Denver’s coaching staff and fans. His bulky 240-pound frame will begin to wear on squishy AFC West run defenses as the season goes on.

Ridley was drafted into the most advantageous spot among rookie receivers. Atlanta suffered a bit of a lull after an explosive 2016 season. However, the Falcons are looking to bounce back strong after inking their star quarterback Matt Ryan to an extension. The former MVP will make life easy for Ridley by getting him the ball in space.

With defenses concerned by Julio Jones’ presence, it’s ensured that Ridley will never have to face the opponent’s No. 1 corner. He’s explosive on deep throws, and runs routes with effortless precision. With Taylor Gabriel now in Chicago, Ridley will instantly slot in the starting lineup.

The Bears have arguably the most improved receiving corps in the league heading into 2018. We already mentioned Gabriel, but Chicago also added former Jaguar Allen Robinson as well as second-round Memphis product Anthony Miller. The highly-productive youngster hauled in 18 touchdown passes for the Tigers last year — regularly making defenders look silly with his lightning-quick feet and inhuman body control.

New head coach Matt Nagy will allow his quarterback Mitch Trubisky to fire it down field a bit more in Year 2. Miller’s skill-set makes him an ideal recipient for those deep connections.

The biggest thing holding Chubb back from moving up higher on this list is the presence of Carlos Hyde. Based upon his injury history, past evidence suggests that Hyde will miss game at some point. However, he is productive when healthy. Cleveland will hand the ball off to Hyde as long as he’s available.

That being said, that doesn’t mean Chubb won’t have a role. Keeping Hyde out of goal line situations helps the running back stay off the shelf. At a stout 5’10”, 230-pounds, Chubb is perfect for taking that role. Chubb has a bit of an injury history of his own (knee surgery in 2015). However, the 22-year-old is a supreme talent with the ability to eventually be featured.

Carolina’s passing offense will be improved in 2018. Greg Olsen appears ready to go after being out a majority of last year. In his stead, Christian McCaffrey and Devin Funchess developed into deadly threats. Last year’s second-round pick, Ohio State’s Curtis Samuel, also figures to be in the mix. Cam Newton should be at his best with all of the talent surrounding him. Each of the Panthers’ overall production could rise as a result.

Moore is a solid route-runner with the ability to make difficult catches. He’s especially dangerous turning bubble screens and hitches into huge gains. Don’t expect 100-plus targets right away, though Moore will find his way on the field as both a receiver and punt returner. 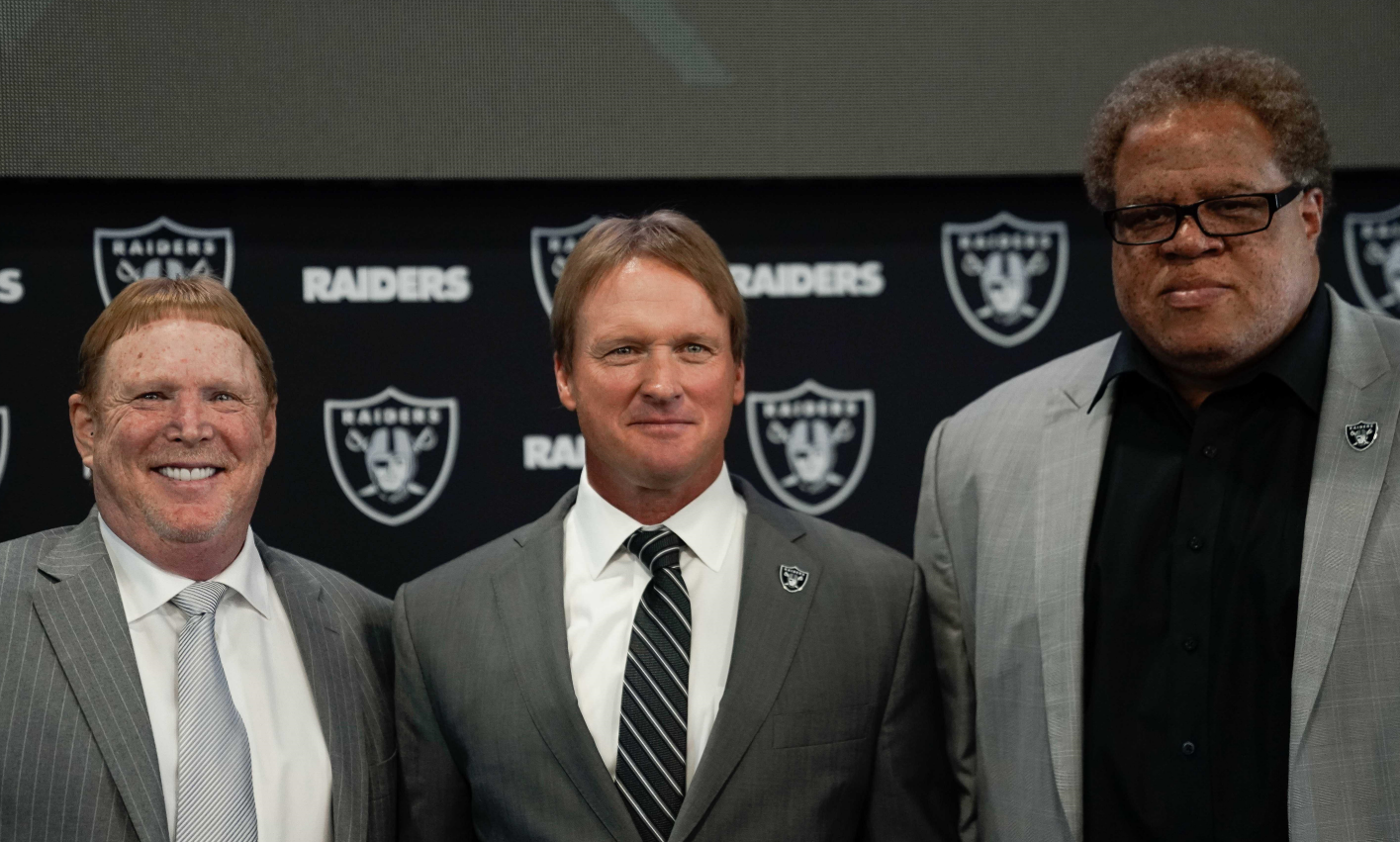 What Exactly Are the Raiders Doing?