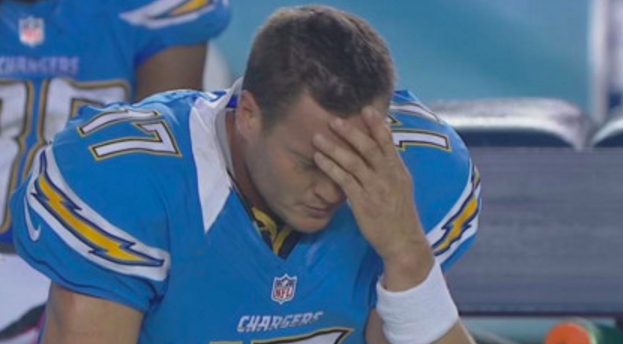 Philip Rivers just did something Peyton Manning and Aaron Rodgers have never accomplished in their illustrious careers – he threw for over 500 yards in a single NFL game. Despite Rivers’ unbelievable 503 passing yards, his San Diego Chargers still lost to the Green Bay Packers, 27-20.

There have now been 17 games in which a quarterback has exceeded the 500-yard mark, and Green Bay has been on defense three of these occasions. The Packers have now allowed Philip Rivers, Matthew Stafford and Ben Roethlisberger to accomplish this feat, but Roethlisberger was the only quarterback to come out with a win.

Down by seven on Green Bay’s two-yard line with 35 seconds left, Rivers was unable to make it 505 yards to send it to overtime. Green Bay’s goal-line stand preserved their undefeated start to the season, despite playing less than their best.

Eddie Lacy was completely nonexistent, with 3 rushing yards and 17 receiving yards on a total of six touches. Aaron Rodgers looked a bit out of sync with his receivers, completing 16 of 29 passes while only connecting with Randall Cobb twice for 38 yards.

This is now back-to-back weeks in which the Green Bay offense has failed to click on all cylinders in front of the Lambeau crowd. The team has looked far from its dominant self the past few weeks, but would surely allow 500 passing yards every game if it resulted in a win.

The loss for the Chargers comes on the heels of last week’s devastating Le’Veon Bell touchdown, which occurred with no time left in the game. After consecutive heartbreaking losses, I certainly wouldn’t want to be the one sitting next to Rivers on the plane ride home.