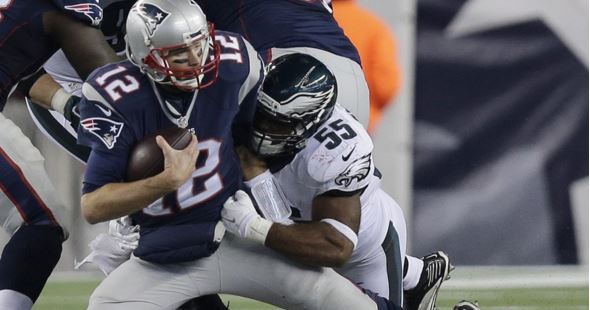 If an NFL team is to take down Tom Brady and the New England Patriots at Gillette Stadium, all they need is a blocked punt for a touchdown, a 99-yard pick-six and an 83-yard punt return for a touchdown. Even with all three of these non-offensive touchdowns, the Philadelphia Eagles barely squeaked out a win over Brady’s squad.

RELATED: Despite Loss, New England Patriots Come Away Winners For This Reason
Despite the awful performance by the Patriots, it’s nowhere near time to panic. It was an uncharacteristically poor showing for a team who so rarely loses two games in a row, but every team is entitled to a bad week (or two).

The craziest part of all might have been the fact that the Patriots still had a chance to send the game to overtime. Down three touchdowns with six minutes remaining, the Eagles did everything in their power to keep New England in the game.

Brady marched his offense down the field on a seven play, 71-yard drive to cut the score to 35-21 with 5:27 remaining. On the ensuing onside kick, Eagles tight end Zach Ertz fumbled the ball, New England recovered, and Brady quickly threw another touchdown with 3:02 left on the clock.

Down by seven with three minutes left, New England attempted another onside kick, but Philadelphia recovered. After running the ball twice to force New England to use their timeouts, Eagles quarterback Sam Bradford connected with Riley Cooper for 14 yards and a first down to seemingly ice the game.

However, Eagles running back Kenjon Barner took it upon himself to keep things interesting. Fumbling with just over one minute remaining, the Patriots recovered the ball and gave Brady one last chance.

Needing to drive 75 yards in 62 seconds, overtime felt inevitable. But for the first time since Week 9, Philadelphia actually showed some interest in winning (and saving Chip Kelly’s job). Aided by three dropped passes from Patriots’ receivers, the Eagles defense forced a turnover on downs and pulled out the season-saving victory.

RELATED: Hall Of Fame Receiver Is Offering His Services To The New England Patriots
The game reminded us that no effort on special teams and injuries to Julian Edelman, Danny Amendola and Rob Gronkowski can make the Patriots a very vulnerable team. But with their star receivers returning for the postseason and the odds of allowing three non-offensive touchdowns again appearing slim, the Patriots are still destined for their second consecutive Super Bowl win.