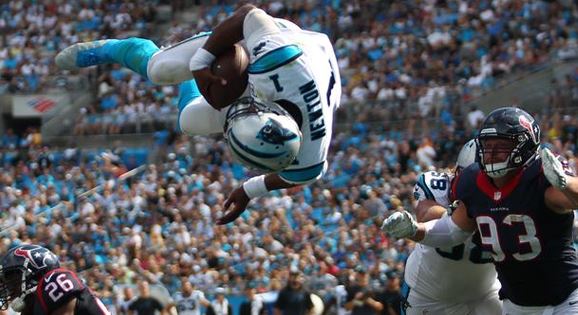 Week 2 was certainly a crazy 16-game slate, with the Cleveland Browns, Washington Redskins, Oakland Raiders, Jacksonville Jaguars and Tampa Bay Buccaneers all winning on the same day for the first time in NFL history. With Las Vegas sportsbooks coming out way ahead after so many underdogs covered, I feel lucky to have escaped Week 2 with a 2-3-0 record.

Let’s dive right into five of the most exciting games taking place in Week 3 of the NFL.

I’m not ready to give up on the Philadelphia Eagles just yet. While the New York Jets have certainly looked impressive through two weeks, this line is a bit inflated. Chip Kelly is an offensive mastermind, and simply has too much talent for the Sam Bradford-led squad to keep playing as terribly as they have been. This will be the week the Eagles get back into their preseason-like rhythm, and Ryan Fitzpatrick will remind us how mediocre he really is. The Eagles win outright, and we can finally stop hearing about Chip Kelly’s failed off-season roster overhaul for one week. The St. Louis Rams got completely outplayed by the Washington Redskins, leading to concerns regarding consistency. Following an emotional home opening win over the Seattle Seahawks, the Rams return home to take on another top-tier NFL squad. The Pittsburgh Steelers looked the part in their 43-18 win over the San Francisco 49ers, and now get star running back Le’Veon Bell back from his two game suspension. However, the Rams defensive line will dominate Pittsburgh’s offensive line, and St. Louis will capitalize on Pittsburgh’s iffy run defense. Todd Gurley helps lead St. Louis to a win in his NFL debut, and the Rams stay perfect at Edward Jones Dome. This game certainly carries more weight for the Baltimore Ravens than the Cincinnati Bengals. Sitting at 0-2 following two road losses, the Ravens desperately need to get in the win column with this AFC North showdown. Andy Dalton has played magnificently so far this season, but that run ends this weekend. After the Ravens defense got embarrassed by the Oakland Raiders, John Harbaugh’s unit will come out motivated to show that last week’s game was a total fluke. Dalton will get sacked at least four times, A.J. Green is held to 70 yards, and the Ravens have their way in a must-win game. The Detroit Lions haven’t given much reason to be optimistic after starting the season 0-2 against the spread, but this week should be different. While Denver has actually covered in both of their games, the Lions should give the Broncos all they can handle in this game. Denver’s defense has carried them to their first two victories, and non-offensive touchdowns just can’t be considered reliable. The Lions desperately need this game after losing to the San Diego Chargers and Minnesota Vikings, and barring another Stafford injury, should be able to keep this game within a field goal. The Kansas City Chiefs have 10 days to prepare for this game after their heartbreaking loss to the Denver Broncos, giving them loads of time to scheme for Aaron Rodgers and the Green Bay Packers. Unfortunately, the Packers reminded fans last week that they are just unbeatable at home. No matter how much time you spend trying to figure out how to slow down Rodgers and the offense, you will still be left looking silly. Getting the Packers as only a touchdown favorite is a bargain, especially if Jamaal Charles plans to keep giving the ball to the opposing team.