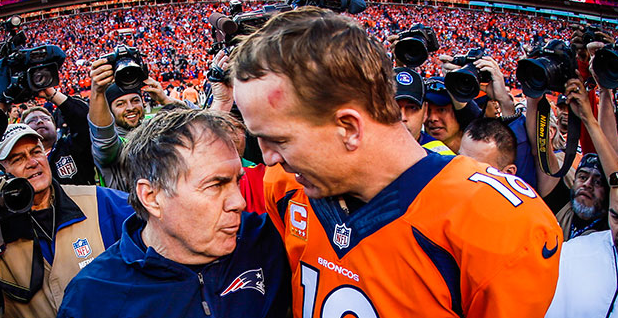 With all the quarterback confusion for the Denver Broncos this season, many believe that Super Bowl 50 could be Peyton Manning’s last game. Based on his most recent comments to New England Patriots head coach Bill Belichick, that assumption appears to be correct.

After Denver’s 20-18 win against the New England Patriots in the AFC Championship Game, Belichick and Manning embraced at midfield. The 5-time MVP told Belichick, “Hey listen, this might be my last rodeo, so, it sure has been a pleasure.”

The 39-year old Peyton Manning has met with the Patriots frequently over the years, but now holds a 3-2 record against rival Tom Brady in the playoffs.

Manning wasn’t perfect in this AFC title match, throwing for 2 touchdowns, but only 175 yards on 35 attempts. In fact, Manning has struggled mightily all season long. In his 18th season, Manning threw for only 9 touchdowns and 17 interceptions during the regular season – an extremely disappointing stat line for the future Hall of Famer.

However, the struggles didn’t stop Manning from going an impressive 7-2 in those first nine games. Manning then missed the next seven games with a foot injury, but regained the job from Brock Osweiler during the last game of the season.

Now, in what is alluded to as possibly Peyton Manning’s final game, the oldest quarterback to ever start a Super Bowl will square off against Cam Newton and the Carolina Panthers. Manning will hope to go out like Ray Lewis – hoisting the Lombardi Trophy after the final game of his career.