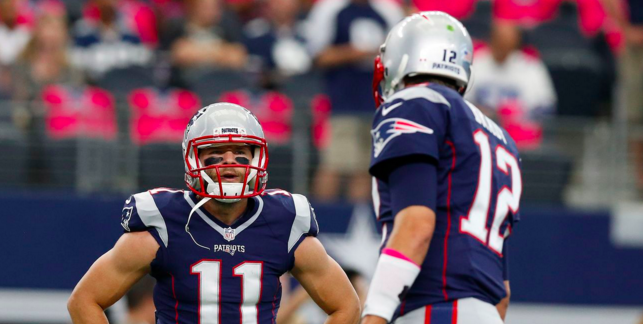 New England’s 27-20 victory over the Kansas City Chiefs on Saturday propelled the Patriots to their 10th AFC Championship game in the past 15 years. There is no denying the incredible dynasty Bill Belichick and quarterback Tom Brady have built, as they are now showing an ability to compete for Super Bowls while remaining one-dimensional.

In a total passing attack, the offense seemed rejuvenated with a healthy combination of Julian Edelman and Rob Gronkowski. The Patriots (13-4) are trying to become the first team to win back-to-back NFL titles since they did it in 2003-04. But first, they will have to get through Peyton Manning and the top-seeded Denver Broncos.

Against the Chiefs, the game plan for the Patriots was simple: get the ball in No. 11’s hands. Collecting 10 receptions for 100 yards, Julian Edelman proved to be the clear difference maker for New England. “When you get back No. 11, it makes things out there easier,” receiver Keshawn Martin said. “Not just for a couple of players, but for everybody. You’ve got to worry about so many different players out there.”

When the Patriots’ offense is at their best, Brady takes the snap and quickly flings passes to shifty and speedy targets like Edelman and Danny Amendola, who exploit open spaces in defenses. To a certain degree, New England uses these quick, short passes as their source of a running game. Then, when cracks open up down the field, Brady finds behemoth Rob Gronkowski for huge gains.

This lethal Patriots team appears destined for another date with the Lombardi Trophy. With their key pieces healthy, and their offense so in sync, New England should steamroll Denver and defeat whichever NFC squad is waiting for them in Super Bowl 50.