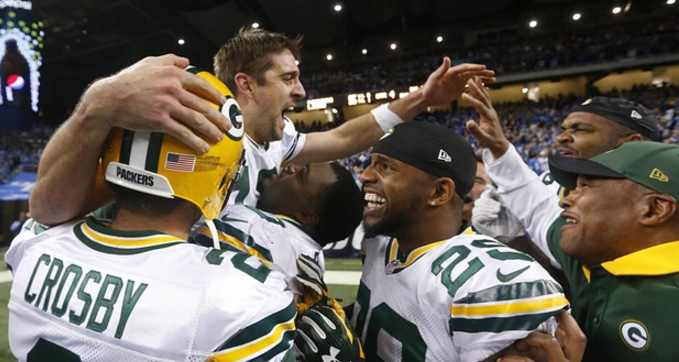 The Green Bay Packers finally got revenge on Golden Tate for his 2012 ‘Hail Mary’ touchdown as time expired. While a member of the Seattle Seahawks, Tate came down with a highly questionable catch with no time on the clock, giving the Seahawks a win and officially forcing the replacement referee era to come to an end.

There was no disputing Richard Rodgers’ ‘Hail Mary’ catch this time.

With the Packers down 23-21 with 23 seconds left, the Lions appeared well on their way to a fourth consecutive victory. But any Detroit fan would be quick to tell you there’s no such thing as a guaranteed win when it comes to the Lions.

As the Packers lateraled the ball with no time remaining, Aaron Rodgers stood 70 yards from a touchdown when Devin Taylor came charging in. Yanking Rodgers down by his jersey, the violent motion led the referee to call a face mask penalty on Taylor, which gave the Packers one untimed play from their own 39-yard line.

RELATED: Green Bay Packers Fans Need To R-E-L-A-X
With one last chance, Rodgers evaded two Lions’s pass-rushers, rolled to his right and unleashed a towering 65-yard pass to the end zone. Like a power forward in basketball, tight end Richard Rodgers backpedaled while boxing out anyone in his way (there was no one), timed his jump perfectly, and easily came down with the catch.

It was the kind of play/game Green Bay had been on the wrong side of all too often, but it felt like another day at the office for a cursed Lions franchise.

Despite being up 17-0 at halftime, 20-0 midway through the third quarter and 23-21 with zero seconds left on the clock, the Lions still found a way to lose. As Calvin Johnson watched in disbelief from the sideline, it immediately begged the question as to why the 6’5” receiver wasn’t in the game to break up the ‘Hail Mary’ toss.

There isn’t a single player better at catching the ball at its highest point than Johnson, making it a no brainer for Lions head coach Jim Caldwell to put him in the game. Instead, Detroit had safeties and linebackers waiting four yards deep in the end zone, which allowed Rodgers to get position and come down with the catch.

Certainly the final straw for Caldwell’s disastrous tenure in Detroit, the coaching staff might as well start packing their bags now. There’s no possible explanation for how the Lions figured out how to lose this game, but deep down, Golden Tate is blaming it on one thing – karma.