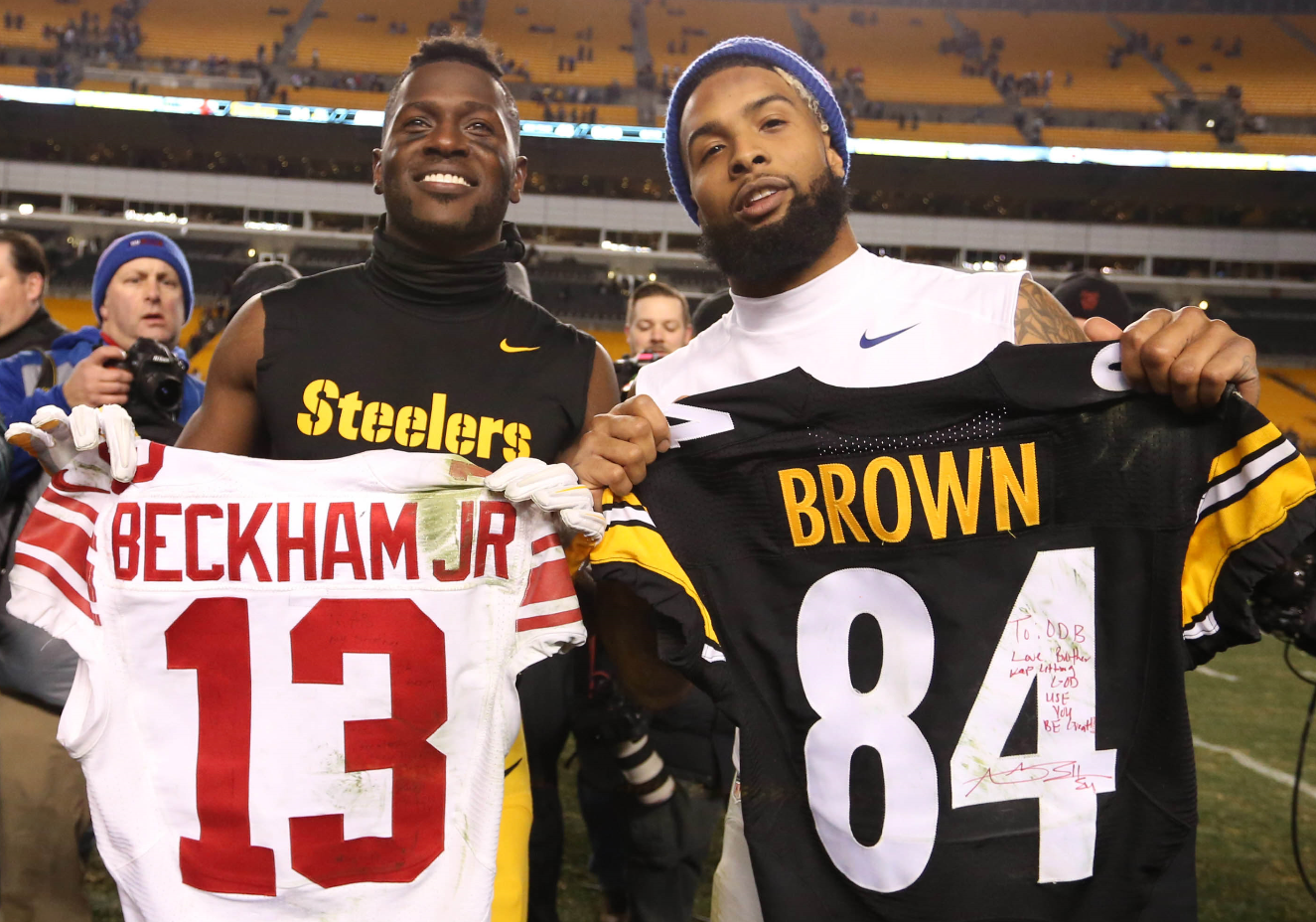 With a week to go until a meaningful football game is played, our crew decided to pass the time by throwing out a couple of hypothetical scenarios. Here are the rules for engagement: pick a current NFL wide receiver you would want for one play, one drive, one game, and the next five years. The only rule is that you cannot select the same player for more than spot — each pick has to be unique. This is what our writers came up with:

Harris Ahmadzai — DeAndre Hopkins: Wide receiver is the flashiest position in the league, so it only makes sense to grab a true show-stopper here. Hopkins has near inhuman body control that allows him to make spectacular plays look routine. He’s had plenty of work against some of the top corners in the league, having come off a season in which he faced off with Jalen Ramsey, A.J. Bouye, Patrick Peterson, Malcolm Butler, Marcus Peters, and Richard Sherman. Regardless of who lines up opposite of Hopkins, I can feel confident that he will go up and make a play on the ball.

Dylan Fraychineaud — Larry Fitzgerald: This selection may not be the most popular, but hear me out. On the verge of 35, Fitzgerald remains arguably one of the most reliable receivers of all-time. The Cardinals’ legend caught 67.7 percent of the passes intended to go his way in 2017 — a higher mark than Julio Jones, Antonio Brown, DeAndre Hopkins, and Odell Beckham Jr. Fitzgerald doesn’t possess the same top-end speed he once displayed, but he has evolved with age and matched a career-high with 109 receptions last season. The crafty veteran can get open on any play and is almost a lock to catch any ball thrown his way.

Jason Fray — Odell Beckham Jr.: Let’s be honest… we’re not talking about the most stable or consistent receiver. But if we’re talking about the potential on one single play, I’m taking Beckham Jr. He can do things on the football field that no one else can manage. The former LSU product has gigantic hands, supreme lateral and straight-line quickness, and the leaping ability to resemble an acrobat soaring through the air on a trapeze with the greatest of ease. His one-handed catch versus the Dallas Cowboys truly speaks for itself.

Blake Hoffman — Tyreek Hill: I believe Unger from The Longest Yard once said: “[Tyreek Hill] is so fast, he makes fast things look, not fast.” Have you seen Hill on the football field? Does anyone create more separation than him? Does anyone make an 80-yard touchdown look more effortless? The answer is a very clear no. He’s not the possession receiver who will catch 12 passes and move the chains all game, but for one play, I want Hill with the ball in his hands.

Harris Ahmadzai — Antonio Brown: I picked Brown’s Pittsburgh teammate, Le’Veon Bell, for the same category in the running back version. I’m pretty much saying the Steelers are virtually unstoppable in a one-drive situation. Brown picks up chunk yards easier than any player I’ve ever witnessed. He’s essentially the total package as a receiver — a gifted route runner that can pick up yards after the catch. He’s incredibly perceptive of time, score, and field position, often fighting for extra yards or scurrying out of bounds at the perfect moments. When the ball’s near the red zone, Brown becomes an impossible cover, as his vast route tree places defenders at his mercy.

Dylan Fraychineaud — Julio Jones: Jones may be the single biggest mismatch at the receiver position — excluding Rob Gronkowski — and is a threat whenever he lines up on the field. Jones is only two seasons removed from posting one of the greatest statistical seasons ever by a receiver, and remains a top-3 talent in the game today. Jones’ superior height and athleticism sets him apart from many of his peers. Not only does Jones have the ability to overpower defenders downfield, but his size allows him to go across the middle as well.

Jason Fray — Julio Jones: Jones has a physical prowess very few can match from the receiver position. The Alabama product laughs at the prospect of any defensive back trying to body him up at the line of scrimmage. With a simple (and strong) disengage, Jones immediately garners the separation necessary to make a play. Along the same lines, there are times in which Jones plays the game like a power forward. He boxes out defenders with his body, and thus uses his immensely strong hands to pluck the ball out of the air like a piece of fruit. Lastly, Jones’ leaping ability makes him a dynamo in red zone situations. Good luck defending him on a fade to the back pylon.

Blake Hoffman — A.J. Green: What a world it would be to see A.J. Green catch passes from someone other than Andy Dalton. Despite shaky quarterback play, Green still takes over drives with ease. Arguably the best toe-tapper in the league, Green can catch a 70-yard touchdown as easily as he can haul in five ridiculous catches along the sidelines to move the chains. Between his speed, athleticism and ability to win jump-ball situations, this one is a no-brainer for me.

Harris Ahmadzai — Julio Jones: As great as all of these receivers featured in this piece are, an elite defense will force any offense to spray the ball to multiple players. Teams like the Patriots won’t allow the Antonio Brown’s and A.J. Green’s of the world to continuously burn their secondaries. That’s why I like Jones here — because  he commands a double-team on essentially every play. While he doesn’t post the same raw numbers as Brown, Jones is more physically imposing and is a more dangerous down-the-field threat. Like a dunking specialist in the NBA, one highlight play from Jones can galvanize the rest of your team for the remainder of the contest.

Dylan Fraychineaud — Antonio Brown: Brown has been terrorizing defenses since 2011, but has been exceptionally deadly over the past four seasons. Since 2014, the Miami native is averaging 7.7 receptions and 104.1 yards per game. Playing alongside Le’Veon Bell allows more room for Brown to operate than any team would like him to have. Brown is a great route runner and is even better after the catch. Brown excels at creating extra yards after the catch and has the ability to turn any play into a game-changer. You may be able to shut out Brown for a drive, but there is virtually no way to stymie him for an entire game.

Jason Fray — Antonio Brown: Why limit the best receiver in football to one play, or one drive? I would do everything I could to fully maximize Brown’s insane talent over the course of a complete game. He terrorizes opposing defensive backs on a weekly basis. Brown couldn’t care less if he’s pressed at the line of scrimmage or faced with zone coverages. All the Central Michigan product does is makes plays. Another benefit includes Brown’s impact in terms of drawing attention. Should he face double or even triple-coverage, it’ll leave teammates available to exploit tasty one-on-one matchups.

Blake Hoffman — Julio Jones: There isn’t a more physically imposing receiver in today’s NFL than the Alabama alum. While scoring touchdowns has been an issue, much of that should be attributed to the fact that he is always double teamed. Despite occupying so much of the defense’s attention, though, it hasn’t stopped Jones from posting some ridiculous stat lines. With a 250+ yard game in each of his last two seasons, no one can dominate a game quite like Julio. Capable of running short, intermediate and deep routes over the middle or along the sideline, good luck trying to stop Julio for 60 minutes.

Harris Ahmadzai — Michael Thomas: The debate here is between Thomas and Odell Beckham Jr. Both guys are 25 years old, and have had near historic statistical starts to their careers. Beckham is significantly faster and has a more impressive highlight tape, but Thomas is bigger, stronger and has surer hands. While it’s a close call, I give Thomas the edge because I’m more certain of what I’m getting. Beckham has been banged up virtually every year of his career, and has had his fair share of tantrums on the field. Thomas already looks like a consummate professional after two years in the league, and is poised to dominate the position for the foreseeable future.

Dylan Fraychineaud — Odell Beckham Jr.: A counter to Harris’ argument for Michael Thomas — I’ll take the temperamental superstar over the stoic Saint. While Thomas is indeed bigger, stronger, and has a better catch rate (72.9 percent) than Beckham (62.9), Beckham’s raw talent and potential is hard to pass up. Beckham’s top-end speed translates to sensational plays and game-changing moments. Odell has 38 touchdowns in 47 career games — Thomas has 14 in 31. Both players are averaging roughly 6.5 receptions per game, but Beckham is averaging 94.1 yards per game opposed to Thomas’ 76.8. Beckham’s attitude and health are legitimate concerns, but his potential is too great for me to pass on.

Jason Fray — Mike Evans: Evans might be a surprise to some. Many would likely take DeAndre Hopkins, Tyreek Hill, or Michael Thomas at this slot. However, Evans has already proven to be a very productive player. The Texas native is a massive individual. Standing 6-foot-5, the 231-pound receiver is exceptionally difficult to stop on any elevated throw. As such, it makes him a very big red zone target. Evans has accumulated at least 1,000 yards in each of his first four NFL seasons (and that’s with shoddy quarterback play). At only 24 years of age, Evans should be in line for a very nice next half-decade.

Blake Hoffman — Antonio Brown: 30 is the new 25 in today’s NFL, and I’m going to use that logic to justify going with the 30-year-old for the next five years. Sure, every other elite receiver is younger than Brown, but has he given us any concern that he will slow down anytime soon? The guy has five straight seasons with 100+ catches, 1,200+ yards and eight or more touchdowns. Big Ben might not be around three or four years from now, but I’ll still bet on Brown to keep posting monster numbers. 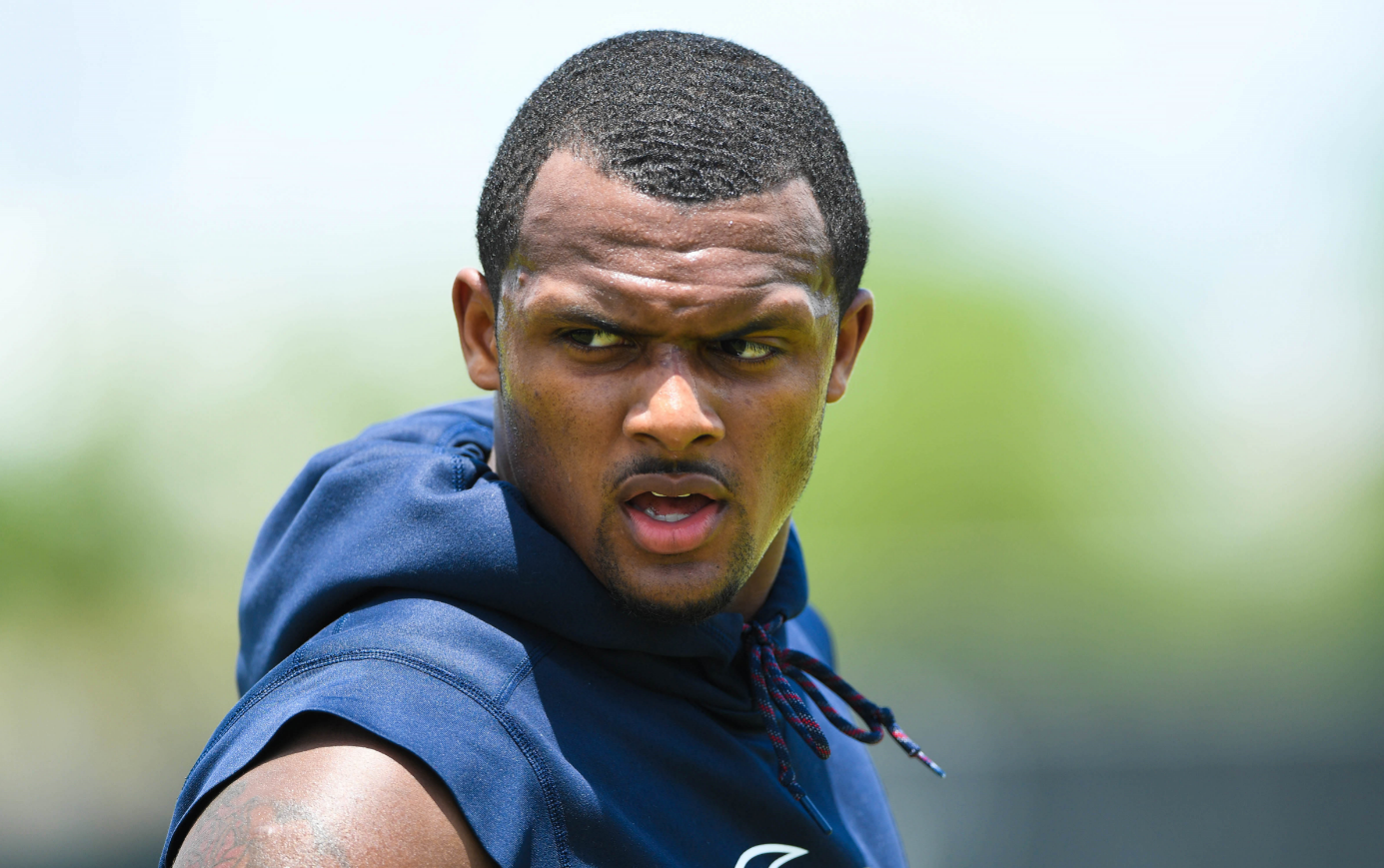 Worst-to-First NFL Rankings: Which 2017 Bottom-Dweller Has Best Chance To Win Their Division