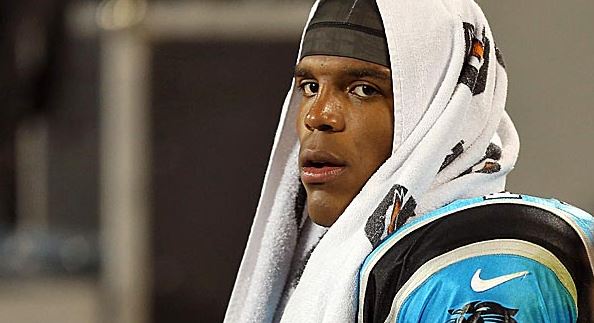 Cam Newton and the Carolina Panthers kept their hopes of a perfect 19-0 season alive with a thrilling 41-38 victory over the New Orleans Saints. But instead of acknowledging the Panthers’ spectacular win, critics were more focused on a play that occurred early in the third quarter.

RELATED: Another Week, Another Dominant Performance By The Carolina Panthers
At the New Orleans 4-yard line, Newton rolled to his right and began jogging to the corner of the end zone for a touchdown, which would have given his Panthers a 19-16 lead. Much to the surprise of Newton, Saints linebacker Michael Mauti met him at the 1-yard line for a brutal helmet-to-helmet collision. The MVP frontrunner was slow to get up, but after a timeout, went back on the field and capped off the drive with a 13-yard touchdown pass to Ted Ginn Jr.

Following his second touchdown pass of the game, Newton went to the locker room to receive tests for a concussion. Returning to the field by the time New Orleans punted the ball, Newton didn’t miss a single offensive snap.

Skeptics have questioned how thorough of a test Newton was administered, leading the franchise quarterback and head coach to take great exception. Newton was stern in his post-game statement, saying “hear me when I say, I do not have a concussion,” while coach Ron Rivera shouted at reporters that they shouldn’t question his integrity.

It’s easy to understand why many might question the validity of in-game concussion tests, as team doctors have an unfair pressure to clear athletes to return to the field. However, Carolina has shown that they will not risk their own star players’ health for immediate on-field success. The Panthers held All-Pro linebacker Luke Kuechly out for three games due to a concussion, and the entire team has consistently downplayed the importance of finishing the regular season 16-0.
RELATED: Over Halfway To Perfection, Can The Carolina Panthers Go 16-0?

For a team so often ridiculed as being unworthy of their perfect 12-0 record, you would think the Panthers could at least get the benefit of the doubt regarding their performance off the field. But in a time when every NFL franchise is held under a microscope, it’s clear a Lombardi Trophy is the only thing capable of silencing the critics.