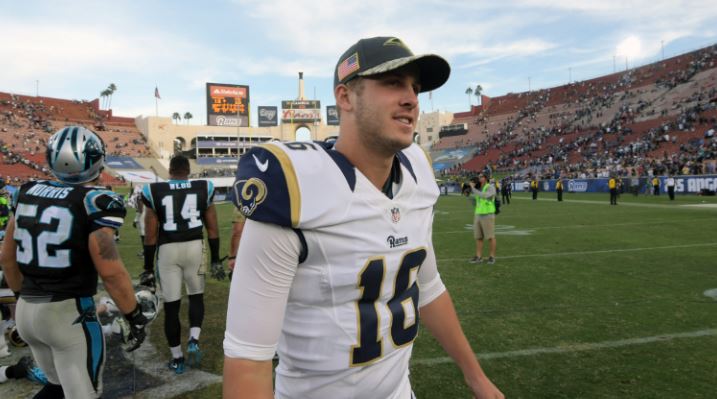 Jared Goff, the No. 1 overall pick in the 2016 NFL draft, will make his debut this Sunday against the Miami Dolphins.

Despite the switch taking place in the middle of the season, it comes at a crucial time. The Los Angeles Rams are 4-5 and in desperate need of a Hollywood hero. Thanks to an elite defense, the Rams remain in the thick of the playoff race, and are hoping Goff can provide the offense with a much-needed boost.

The move is far from shocking, especially when considering the lackluster play of Case Keenum this season. In nine games, the Houston alum threw for a paltry 2,169 yards, 9 touchdowns and 11 interceptions.

Despite weeks of head coach Jeff Fisher refusing to blame the team’s struggles on Keenum, the quarterback’s horrific showing against the New York Jets proved to be the straw that broke the camel’s back. 10 weeks into the season, Keenum ranked last among all 32 starting quarterbacks in Total QBR (43.1), and Los Angeles ranked 32nd and 31st in points and yards per game, respectively.

Simply put, it’s hard to imagine Goff performing at a worse level than Keenum has thus far. The rushing attack with Todd Gurley has been nonexistent thanks to opposing defenses stacking the box, as Keenum proved unable to make defenses pay. The Rams are hoping Goff – the player the team moved up 14 spots in the draft to select – can capitalize against these overloaded defenses.

While Goff struggled mightily in the preseason, the Rams clearly believe the extra practice reps he has taken throughout the season will translate to better on-field results. With the Saints, Patriots, Falcons, Seahawks and Cardinals all remaining on the Rams’ schedule, the rookie will certainly be tested early.

The Rams and their fan base can only hope Goff quickly proves himself worthy of being drafted first overall.