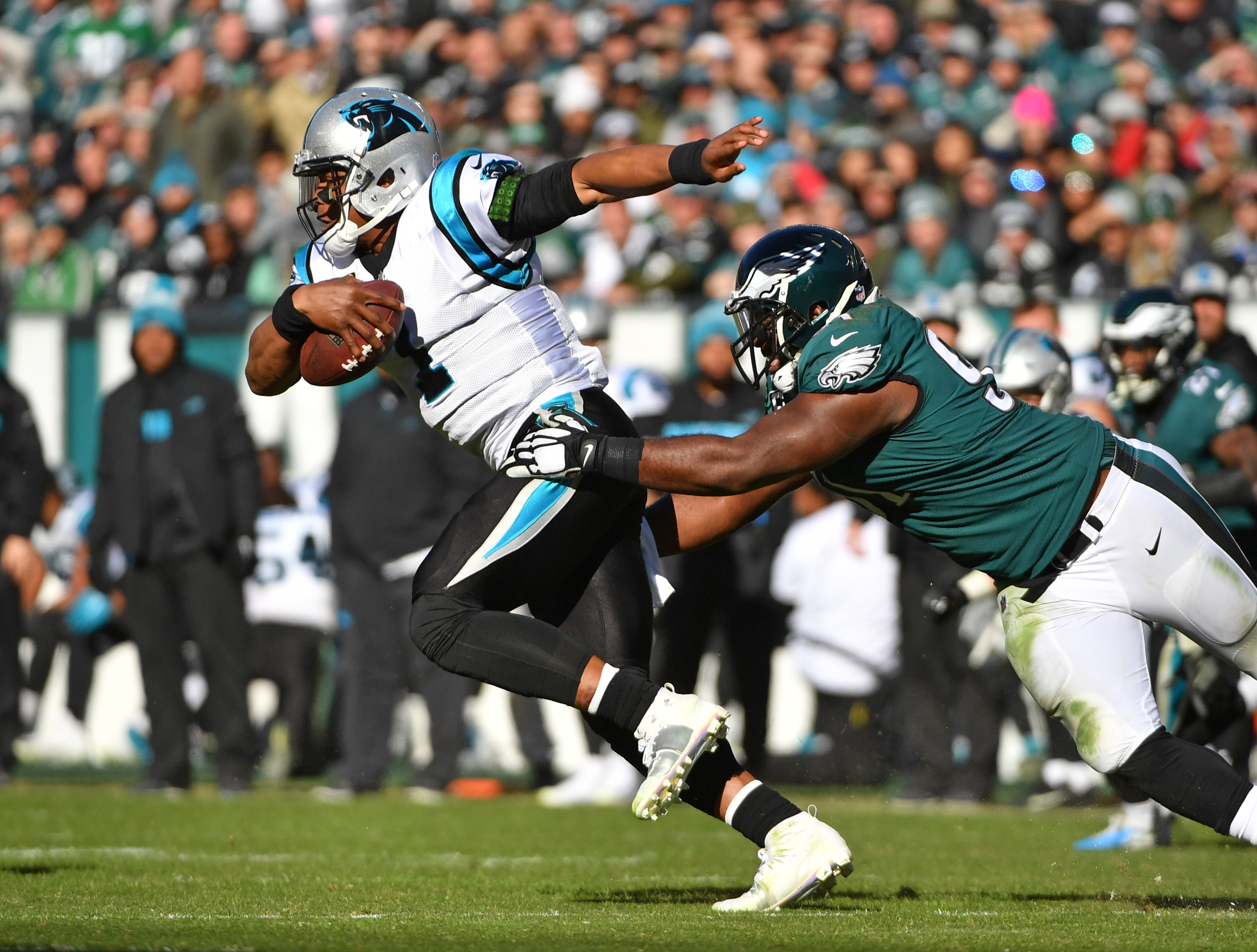 Week 7 result: BYE
Up Next: vs. Indianapolis
Trend: —

The Raiders may not have played this week, but they still managed to steal the attention of the league. Oakland sent wide-out Amari Cooper to the Cowboys for a 2019 first-round pick. Although this season is a lost cause, Oakland now has three first-round picks in the upcoming draft.

Rookie QB Josh Allen has been ruled out for Monday night’s tilt with the Patriots, meaning Derek Anderson will receive his second-straight start. Buffalo’s offense could only muster three points in Indy due in large part to five turnovers.

The 49ers will continue to lose if C.J. Beathard can’t take care of the ball. Since replacing the injured Jimmy Garoppolo in Week 4, Beathard leads the NFL with 10 turnovers. Starting this week, the 49ers have three winnable games in a row — @ Arizona, vs. Oakland, vs. New York Giants.

The Cardinals ran into a pissed off team this week. Denver broke Arizona’s will early and held a 35-3 lead at the break. Josh Rosen threw three interceptions and David Johnson was held under 40 yards rushing.

The Giants surprisingly held Atlanta’s high-flying attack to only 23 points. Unfortunately, the G-Men could only muster 20 points of their own in yet another loss. They were able to move the ball through the air — Eli threw for 399 yards — but they couldn’t convert until late.

Indianapolis put together its most complete effort of the year against Buffalo. Only two games out of first in the AFC South, the Colts have another good opportunity to pick up a win this week as they travel to Oakland to take on the hapless Raiders.

Unfortunately for the Jets, Minnesota put forth their best showing of the season to this point. Sam Darnold will face yet another tough task this week. If the Jets want to win in Chicago they will have to put points on the board early in the game.

The Cowboys are 3-0 at home and 0-4 on the road. The addition of Amari Cooper could boost the offense, but Cooper has struggled for the better part of two seasons. If the move doesn’t pan out the ‘Boys will regret giving up a first-round pick.

Tampa ended its three-game losing streak in dramatic fashion via a 59-yard field goal. Unfortunately, linebacker Kwon Alexander is out for the year with a torn ACL. Tampa’s defense has struggled all year, and now they must play the rest of the season without one of their best defenders.

The Titans have now lost two games by only one point. Instead of kicking an extra point that would have sent the game to OT, Mike Vrabel decided to go for two. Tennessee failed to convert, resulting in their third-straight loss. Tennessee’s defense is more than capable. However, the offense continues to struggle.

Denver ended its four-game losing streak in an emphatic way. The Broncos’ defense harassed Josh Rosen all night, resulting in two pick-six’s and five total turnovers. Up next, a second crack at Kansas City. Denver nearly knocked off KC in Week 4, but they will need a similar defensive performance if they want to upset the division leader.

Somehow, through seven games, the Browns have played four overtime games. Their loss to the Chargers last week remains the only non-competitive contest thus far. While strides have been made, the Browns still do not know how to win football games.

Week 7 result: Lost to Houston 20-7
Up Next: vs. Philadelphia (London)
Trend: -7
Something is wrong in Jacksonville. After a promising 3-1 start to the season, Blake Bortles and the rest of the offense has fallen off a cliff. The Jags have committed 17 turnovers so far, 11 of which Bortles is responsible for. Their defense is going through a rough patch, but the recent failures can be pinned on the offense.

The Dolphins lost twice this week. First, an 11-point loss at home to the Lions dropped Miami to second place in the AFC East. To make matters worse, budding-star wide-out Albert Wilson may miss the rest of the season with a hip injury.

The Texans were a dumpster fire through the first three weeks of the season. Now, albeit in an unimpressive fashion, the Texans have won four in a row to claim sole possession of first place in the AFC South. A relatively easy schedule sets the Texans up nicely for a run at the division title.

Week 7 result: Lost to Carolina 21-17
Up Next: vs. Jacksonville (London)
Trend: -5
For the first 50 minutes of action Sunday, the Eagles were pitching a shutout. Holding a 17-0 lead at home, a win seemed imminent. That is, until the Panthers scored 21 unanswered points to close the game. The Eagles have now lost three-of-four overall and two straight at home.

The Lions have rallied from an 0-2 start to climb back to .500. Detroit is about to enter a very difficult stretch that includes road games in Minnesota and Chicago, as well as home games against Chicago and the Rams. The NFC North is up for grabs, but Detroit’s schedule isn’t favorable.

Seattle’s defense will be tested to its limits over the next five weeks. After facing Stafford in Detroit this week, Seattle faces the Chargers, Rams, Packers and Panthers in consecutive weeks. Yikes.

It wasn’t pretty, but the Falcons did enough Monday night to notch their second-straight victory. Atlanta has plenty of time to prepare for its game in Washington in two weeks. Not only could the game impact their chances of wining the South, but the result could also heavily influence the Wild Card race.

Washington made the first big move in the NFC East this week. With their win over the Cowboys, Washington sits two games ahead of Philly and Dallas in the loss column. Washington’s defense and Adrian Peterson’s resurgence have played a huge role in the team racing out to a 4-2 start.

The Packers are in for a rough two weeks. This weekend, the Packers will travel to Los Angeles to take on the undefeated Rams. Next, a cross-country flight to take on Tom Brady and the red-hot Patriots. You can’t count out Aaron Rodgers, but the Packers would be fortunate to split these two games.

The Bears will be frustrated as a result of losing their second-straight game, but they more than held their own. The difference in the game was special teams. New England scored two touchdowns via special teams — a 95-yard kickoff return by Cordarrelle Patterson and a blocked punt returned 29 yards by Kyle Van Noy.

After a close loss to the Steelers one would have expected the Bengals to come out firing. Instead, Kansas City ran the Bengals off the field with ease. Cincy allowed 45 points and it could have been worse. Two home games and a bye over the next three weeks should benefit the team.

The Panthers did their best Michael Myers impression against Philly, rising from the dead to overcome a 17-point fourth quarter deficit. Carolina’s victory allows them to stay within reach of New Orleans in the South, while also putting room between themselves and the bottom of the division. Carolina is in a good spot.

Week 7 result: BYE
Up Next: vs. Cleveland
Trend: —

The Steelers had the week off but still came away as a big winner. With Cincinnati, Baltimore and Cleveland all losing, the Steelers claimed first place in the AFC North. With their next two games coming against the Browns and Ravens, Pittsburgh has an opportunity to gain an important edge on their rivals.

Joe Flacco led the Ravens on a game-tying touchdown drive at the end of regulation…only for the most accurate kicker in NFL history to miss the extra point. It was the first extra point miss of Justin Tucker’s pro career. The Ravens have a tough game in Carolina followed by important divisional showdowns with Pittsburgh and Cincinnati.

After a surprisingly poor start to the season, the Vikings appear to be hitting their stride. Minnesota’s defense is beginning to play up to its capabilities, and Adam Thielen continues to torch everything in his path. Their Sunday night meeting with the Saints should be a barn-burner.

With four-straight victories under their belt, the Chargers have the second best record in the AFC. Melvin Gordon missed the game in London, but should be fully healthy following LA’s bye week. A favorable schedule over the next few weeks bodes well for the Chargers.

Thanks to Justin Tucker’s untimely missed extra point, Drew Brees has now beaten every team in the NFL. The Saints are sitting pretty. At 5-1, they lead the NFC South and remain within striking distance of the Rams atop the NFC.

Kansas City rebounded well from their loss in New England. After allowing Brady and co. to put 43 points on the board, Kansas City’s defense held Cincinnati to only 10 points. Patrick Mahomes continues to pace a lethal offense that nobody has been able to stop. Their lowest scoring output of the season (27) came against their next opponent, Denver.

New England once again looks like the team to beat in the AFC. In the four games following their consecutive losses to Jacksonville and Detroit, New England has been unstoppable. 38 points against Miami and Indy, 43 against Kansas City. It was supposed to be harder against Chicago, but the offense still scored 24 points in addition to two special teams’ touchdowns.

While the Rams offense has been crushing teams all season, the defense had been underwhelming through six weeks. This past Sunday, that narrative came to a screeching halt. The Rams sacked C.J. Beathard seven times — including four courtesy of Aaron Donald — and forced four turnovers. Things should be harder this week with Aaron Rodgers coming to LA.