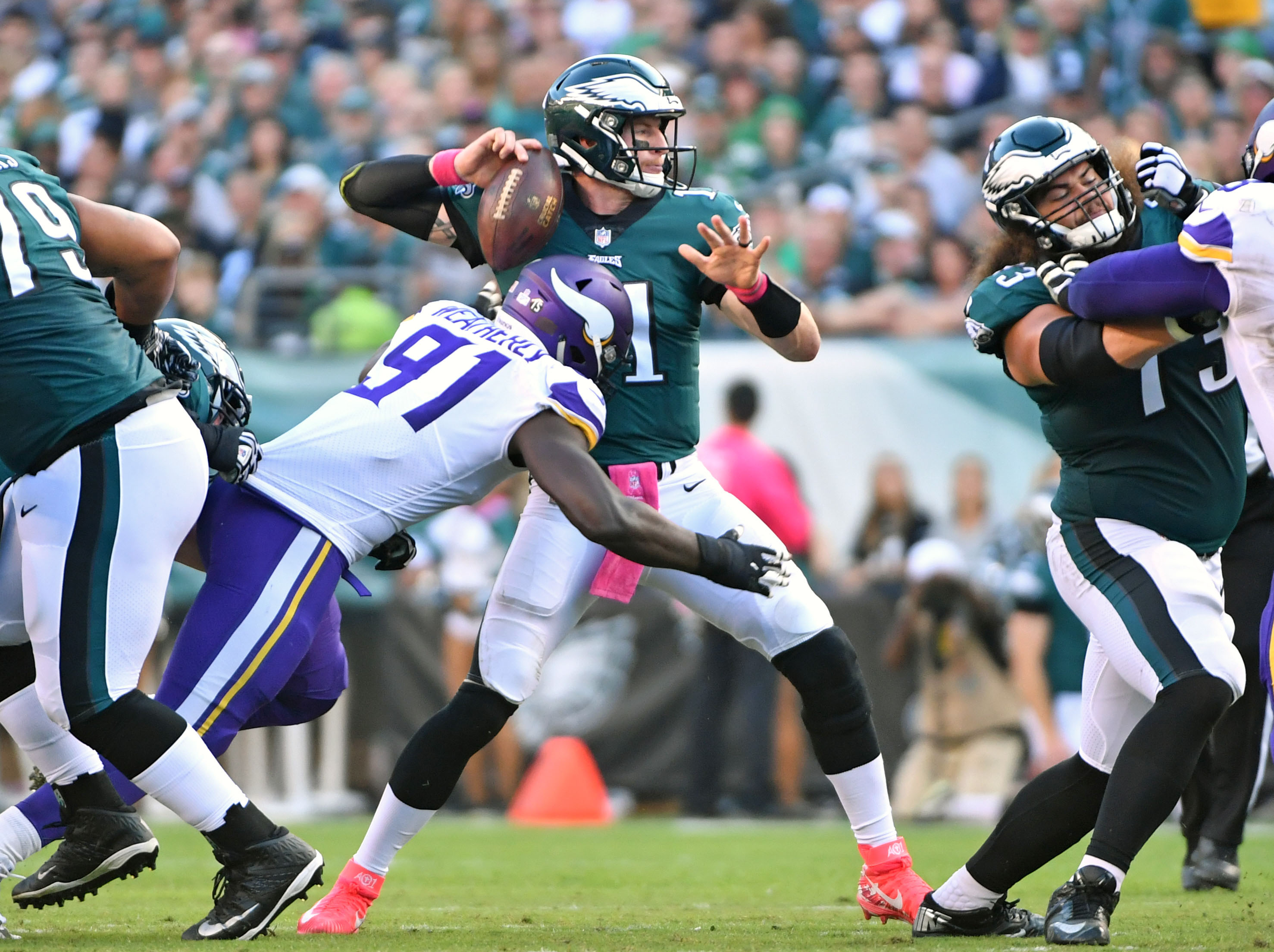 The 49ers look hapless with Jimmy G on the sidelines. After losing to the cellar-dwelling Cardinals, San Francisco’s season is on the brink of complete failure. With the Rams running away with the West, it may be in the 49ers best interest to punt on the season and shoot for a high draft pick.

It is a surprise that the Bills have two wins this early into the season. Conversely, it wouldn’t be surprising if the Bills won only one game the rest of the way. Buffalo’s defense is to thank for their victory over Tennessee, as the Bills’ offense was stymied for a second week in a row.

Josh Rosen led the Cardinals to their first victory of the season in a 28-18 road victory over San Francisco. Arizona’s offense has improved with Rosen under center but still has a long way to go until they strike fear into opposing teams. A trip to Minnesota will provide Rosen with the biggest test of his career thus far.

Oakland was hurt by its worst offensive performance of the season. Their fourth loss of the year puts Oakland in a four-game hole in the AFC West. The Raiders head to London to face the Seahawks in what has become a must-win game for the franchise.

If you were told before the season it would take five games for OBJ to score his first touchdown, the assumption would be that the Giants were off to a bad start. OBJ had a huge game against Carolina — and then called for more targets after the game. The Giants are 1-4 but a victory over Philly would put them right in the mix of things in the East.

New York pounded the Broncos all day to the tune of 323 rushing yards. Isaiah Crowell rushed for a staggering 219 yards on only 15 carries, while Bilal Powell added 99 on 20 rushes. Sam Darnold added three touchdown passes on the day en route to a rout of the Broncos.

In a battle of two of the worst head coaches in the NFL, Jason Garrett led his team to defeat. Dallas’ defense remains impressive and Zeke Elliott is leading the league in rushing, but somehow they can’t grind out victories. The Cowboys are due for a coaching change and a few more losses may finally trigger the action.

The Bucs had the week off which provided an opportunity for people to ignore the imminent return of Jameis Winston. Winston has been named the starter for this week’s game in Atlanta. The Bucs will have a good opportunity to improve to 3-2 while simultaneously ending Atlanta’s season.

The Colts may not win many games this season, but they possibly could have found their running back of the future. Nyheim Hines, Indy’s 2018 4th round pick, has been dynamic out of the backfield. Hines’ immediate connection with Andrew Luck has resulted in great production in the passing game, leading to three total touchdowns thus far for the rookie.

The Texans have rattled off two victories in a row, putting themselves into the thick of the AFC South playoff chase. DeAndre Hopkins continues to torch defenses, but for the Texans to succeed Deshaun Watson must become more comfortable in the pocket. Far too often Watson has looked rattled while under pressure.

After building a large lead over the Packers, Detroit did enough down the stretch to stave off Aaron Rodgers. Mason Crosby’s kicking woes certainly helped their cause, but Detroit looked like the better football team for much of the day. The Lions’ schedule after their bye isn’t the easiest, so it was crucial to hold on to beat the Pack.

The Falcons are reeling. The injuries to their defense appear to be too much to overcome, as the Falcons have allowed at least 37 points in each of their last three games — resulting in three straight losses. While there is still a small amount of hope left for the Falcons, time is running out fast on their season.

Week 5 result: Lost to New York Jets 34-16
Up Next: vs. Los Angeles Rams
Trend: -2
After giving away a lead to the Chiefs last Monday night, the Broncos were steamrolled by the Jets. Three losses in a row has put a damper on a 2-0 start. The Broncos appear to be the third best team in the West (Chiefs, Chargers) and their schedule is not doing them any favors. The Rams come to town this week and a second meeting with the Chiefs is on tap for Week 9.

Drew Brees and the Saints made quick work of Washington on Monday night. The Skins were out of the game from the jump and put forth a lifeless performance. Washington still leads the NFC East with a 2-2 mark, and has an opportunity to expand their lead in the coming weeks.

The Seahawks nearly handed the Rams their first loss of the season in a thrilling, back and forth game. Seattle squandered a 7-point lead in the fourth quarter as the Rams completed the comeback with six minutes remaining. However, Seahawk fans should be encouraged by the play of Seattle’s offense. Russell Wilson and Chris Carson had their best games of the year.

Week 5 result: Defeated Baltimore 12-9
Up Next: vs. Los Angeles Chargers
Trend: +7
Don’t look now but the Cleveland Browns have been competitive in every game this season. Cleveland secured their second victory of the year via a game-winning field goal in overtime. Aside from their performance in Oakland, Cleveland’s defense has been a very good unit.

Miami raced out to a 17-0 lead against Cincinnati, and held a 14-point advantage heading into the fourth quarter. Then, over the final 15 minutes, the Dolphins fell apart. Ryan Tannehill threw a pick-six and the Bengals returned a fumble for a touchdown to ice the game. A 17-0 lead turned into a 27-17 loss — Miami’s second loss in as many weeks.

Due in large part to Mason Crosby’s kicking woes and untimely turnovers, the Packers spotted Detroit a 24-point halftime lead. Green Bay outscored Detroit 23-7 after the break, but the game was all but over after the opening half. Aaron Rodgers and co. will welcome the 49ers to Lambeau with open arms.

A week removed from an invigorating win over the Eagles, Tennessee laid an egg in Buffalo. Tennessee’s defense limited Josh Allen to only 82 yards through the air and allowed a meager 3.3 YPC. The difference in the game — three Titans’ turnovers led to 10 points for Buffalo.

For the first time this year, the Steelers played like the team they were expected to be. Big Ben and Antonio Brown connected for two touchdowns, another went to JuJu Smith-Schuster, and James Conner totaled 185 yards and two TDs. More encouraging, however, were the six sacks recorded by Pitt’s defense.

The Super Bowl hangover is in full effect. After their loss to Minnesota the Eagles now sit at 2-3. However, the biggest loss of the weekend was losing starting running back Jay Ajayi to a torn ACL.

The Chargers have a great opportunity to make a statement in the AFC. Their next six games are all winnable — @ CLE, vs. TEN, @ SEA, @ OAK, vs. DEN, vs. ARI. The odds of winning all six games are low, but it is not a stretch to imagine them pulling off a clean sweep.

The Ravens looked like the better team for much of the first half but they failed to take advantage of their opportunities. A lot will be learned about the Ravens over the next five weeks as they play some of the top teams in football — New Orleans, Carolina, Cincinnati, Pittsburgh, Tennessee.

The Bears come out of their bye week alone atop the NFC North. Over the next four weeks. Chicago takes on every team from the AFC East (MIA, NE, NYJ, BUF). With the bulk of their divisional games coming later in the year, the next four weeks provide an opportunity to stack valuable wins together. With the exception of the New England game, the Bears should be the favorite.

It was closer than it needed to be, but the Panthers outlasted New York thanks to a Graham Gano 63-yard FG on the final play of the game. Carolina has the makings of a good team, and will most likely be in position to contend for a playoff spot all season.

With a win in Philadelphia, the Vikings accomplished a few things. First, they ended a three-game winless streak. Of equal importance, their defense got back on track following three iffy performances. Kirk Cousins and Adam Thielen continue to put up huge numbers, making the Vikes offense more dangerous than ever.

In years’ past, the Bengals would not have won this game. After overcoming a 17-point deficit to win their fourth game of the season, these Bengals appear to be legit. They continue to rack up points (4th in the NFL), and have shown no signs of slowing down.

A 1-2 record has quickly transformed into a 3-2 mark. Tom Brady has led the offense to back-to-back 38-point performances. Julian Edelman is back. Business as usual for New England.

The Jaguars’ defense did its job — intercepting Patrick Mahomes twice and holding the offense to two touchdowns. Unfortunately, Blake Bortles did not hold up his end of the bargain. Bortles threw four interceptions and lost a fumble, resulting in 10 Kansas City points.

Drew Brees has been incredible — 1,658 yards, 11 TD, 0 INT. Alvin Kamara and Michael Thomas have remained lethal. Furthering their explosiveness, Mark Ingram made his return this week against Washington. New Orleans’ second back scored two touchdowns in his first action of the year.

Going up against the Jaguars stellar defense, Patrick Mahomes had his worst game of the season. The Chiefs still managed to run away with a victory, this time due to their defense playing its best game of the season. A marquee matchup with the Patriots this week will be the talk of football.

The Rams lost Cooper Kupp and Brandin Cooks to concussions in the first half against Seattle, overcoming multiple deficits to upend the Seahawks. For the first time all year the Rams were pushed to the brink. Their response further solidifies their standing as the best team in the league.