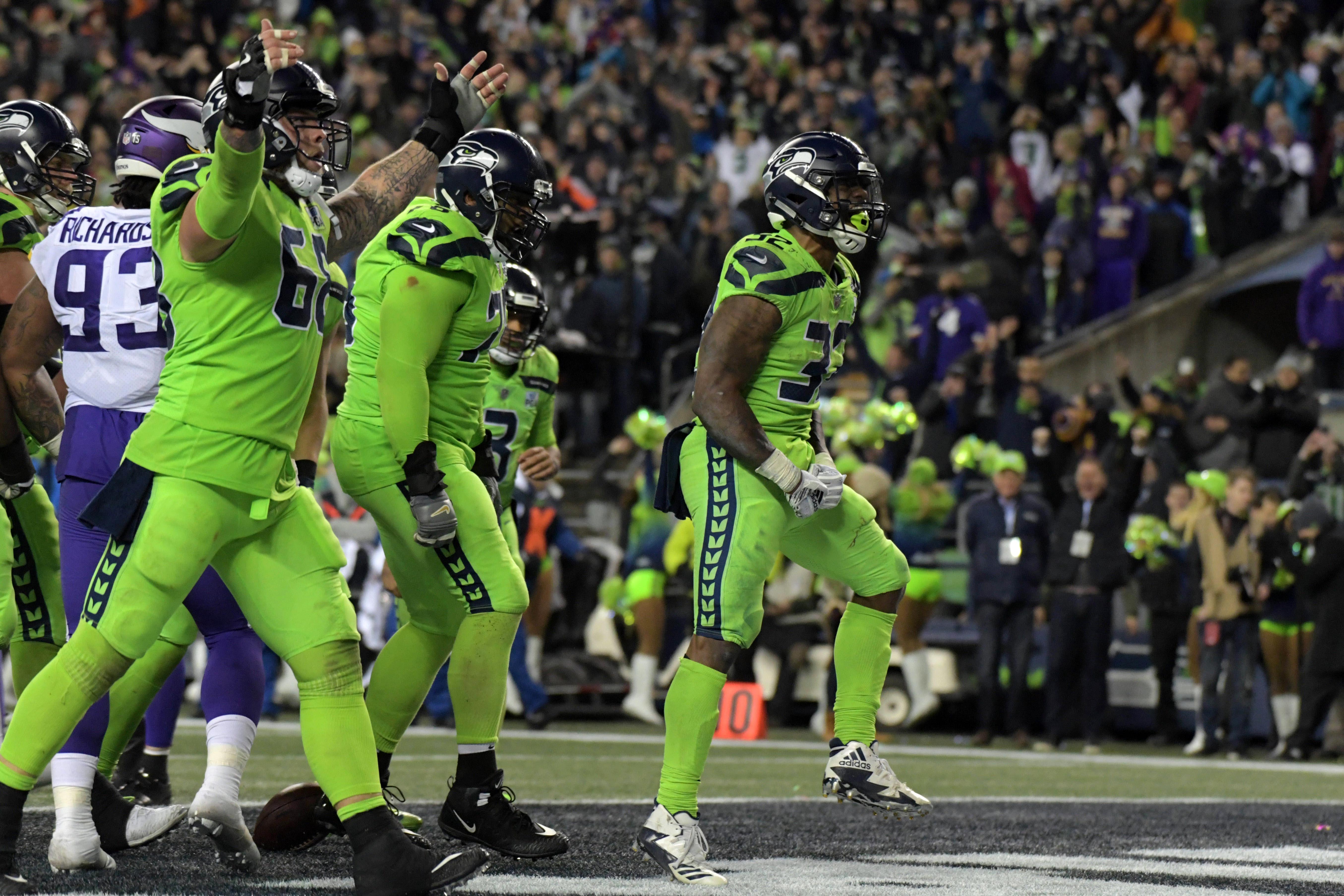 The Cardinals followed up their impressive victory at Lambeau a week ago by putting up an absolute clunker at home against Detroit. Josh Rosen has played his best football in the fourth quarter. Although encouraging, the Cardinals would love to see more consistency from their rookie QB.

Jon Gruden smiled! In knocking off Pittsburgh, Oakland notched its biggest victory of the season. The team may not be talented, but there is no doubt they are still playing hard for Gruden. With Reggie McKenzie’s firing it will be interesting to watch who is brought in to run the team alongside Chucky.

The 49ers don’t seem to care about the No. 1 overall pick. With its third victory of the season, San Francisco remained even with Oakland and Arizona in the race for the league’s worst record. With games remaining against Seattle, Chicago and the Rams, SF should have a good shot at securing the top pick.

Buffalo is an injured squad. RBs LeSean McCoy and Chris Ivory are questionable this week, leaving the Bills with one healthy running back. LB Matt Milano broke his leg and is out for the year. Even the Bills kicker, Stephen Hauschka, is questionable with a back injury. Coach Sean McDermott is ready for the offseason.

Sam Darnold returned and did just enough to help end New York’s six-game losing-streak. Unfortunately, Darnold is once against limited in practice and is splitting first-team reps. He should be able to play this weekend, but it may not be worth the risk.

The Bengals nearly upset the Chargers in Carson (not Los Angeles). It was a promising game for Cincy but will do little to appease its disappointed fanbase. How long can Marvin Lewis hold on to his job?

Jacksonville’s inspired defensive performance against the Colts was an aberration. Derrick Henry ran for 238 yards and four touchdowns on only 17 carries. A truly embarrassing performance by a proud defense.

Tampa seemed to be in control of its game against New Orleans. Poised to take down the mighty Saints for the second time this season, Tampa led 14-3 at halftime. Then, New Orleans scored 25 unanswered points to seize control of the NFC. Two missed field goals and a blocked punt is not a formula for success.

The Redskins once-promising season is all but over. Technically the team is still alive in the playoff race. However, Mark Sanchez and/or Josh Johnson is not going to lead this team there. The Redskins are staring at seven-straight losses to end the year.

Is Dan Quinn’s job in jeopardy? After rallying to a 4-4 record after starting the season 1-4, Atlanta has lost five in a row. The team decided to play its younger members against Green Bay, a trend which should continue the rest of the way.

The Lions have looked like a better team — especially defensively — in recent weeks, but it may be too late to matter. Detroit’s run-defense has improved dramatically since the acquisition of Damon “Snacks” Harrison. Detroit will look to build on its victory this week when they travel to Buffalo to face the mediocre Bills.

New York has been a different team since its five-game losing-streak ended. With four victories in its last five games, New York has stayed alive for the final NFC playoff spot. Saquon Barkley continues to impress — totaling nearly 200 yards of offense against Washington.

The Browns are a better football team without Hue Jackson running the show. After only winning three games under his watch, Cleveland has recorded three victories in only five weeks. This team has the requisite talent to make some noise next season.

Mike McCarthy left, and the Packers showed some effort. The victory means Green Bay is alive for at least another week. It will be tough to win in Chicago, but you can never count out an Aaron Rodgers-led team.

The Broncos had a golden opportunity to claim the No. 6 seed in the AFC playoff race, and they blew it. Losing to a San Francisco team that came into the game with the NFL’s worst record amplifies the loss. Denver still has a chance, but it will surely regret this misstep.

From 6-2, to 6-7. Carolina appeared to be a threat in the NFC a mere five weeks ago. And now, despite a five-game losing-streak, they trail Minnesota for the final playoff spot in the NFC. They have an opportunity to advance to the postseason, but this group is struggling mightily.

Philly has a right to be angry. The referees did not do the Eagles any favors in their showdown with Dallas. Regardless, even with the loss, the Eagles are still in the hunt. Back-to-back games against the Rams and Texans isn’t ideal, but the champs will put up a fight.

A dominant victory over Jacksonville has set the Titans up for a run at the final playoff spot in the AFC. Currently in a logjam with Baltimore, Indy, and Miami, the Titans will need to win-out and get a little help. Due to tiebreakers, the Titans trail the three aforementioned teams.

Kirk Cousins is not good against good opponents. Cousins is also not good in marquee games. The Vikings still own possession of the final playoff spot in the NFC, but they have no room for error. Their Week 17 trip to Chicago could determine if they make the playoffs.

Three-straight losses have changed the mood in Pittsburgh. In three short weeks, the Steelers have gone from having a potential first-round bye, to potentially not winning the AFC North — let alone qualify for the postseason. Things don’t get any easier with the Patriots and Saints up next.

As long as the Ravens play good defense and run the ball well, they will be a tough team to beat. Surely disappointed to leave Kansas City with a loss, the Ravens are still in a good spot. They currently hold the No. 6 seed in the AFC, and trail Pittsburgh by a half-game.

Indianapolis continued its late-season push with an impressive win in Houston. A week after being shutout by the Jaguars, Andrew Luck led the Colts past their division rival — keeping the Colts within reach of the Ravens for the final playoff spot. If the Colts get past Dallas, they may be best-positioned to reach the postseason.

Amari Cooper and the zebras helped solidify Dallas’ inclusion in the playoffs. With a two-game advantage over Philadelphia and Washington, as well as a relatively easy schedule — @ Indy, Tampa, @ Giants — the Cowboys will more than likely host a playoff game.

Losing is never ideal, especially when it potentially costs you a first-round bye. If the Texans had taken care of business against Indy, they would currently be one game ahead of New England for the No. 2 seed. Instead, Houston must hope for another Pats loss in order to jump the reigning AFC champs.

With a win in San Francisco, Seattle will clinch a playoff spot. As things currently stand, Seattle would be the first wild card team. Seattle’s defense has been far better than anyone expected. Whoever matches up with Seattle in the Divisional round will not be excited.

If we learned one thing on Sunday it is that Rob Gronkowski should never play defense. The Pats offense scored at will and controlled much of the game. Even with the loss New England maintained control of the No. 2 seed in the AFC.

The Chargers are a lock for the postseason. They currently have the AFC’s second best record at 10-3. The Chargers’ most likely outcome is to be the No. 5 seed. However, a victory over the Chiefs will put LA in contention for the No. 1 seed. The biggest game of the season — at least for the AFC — takes place Thursday in Kansas City.

What a performance by the Chicago Bears defense. Chicago picked off Jared Goff four times and held Todd Gurley to 28 rushing yards en route to a 15-6 statement-victory. The Bears currently lead Dallas by one game in the race for the No. 3 seed. The Bears would clinch the NFC North with a victory over Green Bay, or a Minnesota loss this weekend.

The Chiefs are simply not the same team without Kareem Hunt. They still have enough talent to win, but they aren’t as scary without Hunt. One huge area of concern this week is the health of Tyreek Hil. Hill was limited in practice Tuesday and is not a lock to play against the Chargers.

Despite their defense limiting Chicago to only 13 points (the Rams also yielded a safety), LA couldn’t beat the Bears. Jared Goff had his worst game since his rookie season (4 INT), Gurley couldn’t get going (28 yards) and Sean McVay called a poor game. The Rams also fell into second behind New Orleans in the NFC.

The Saints came out flat for the second week in a row, this time falling into a 14-3 hole at halftime. They turned it on in the fourth quarter to claim their 11th victory of the season. The Saints are now atop the NFC and are poised to have home-field throughout the playoffs.