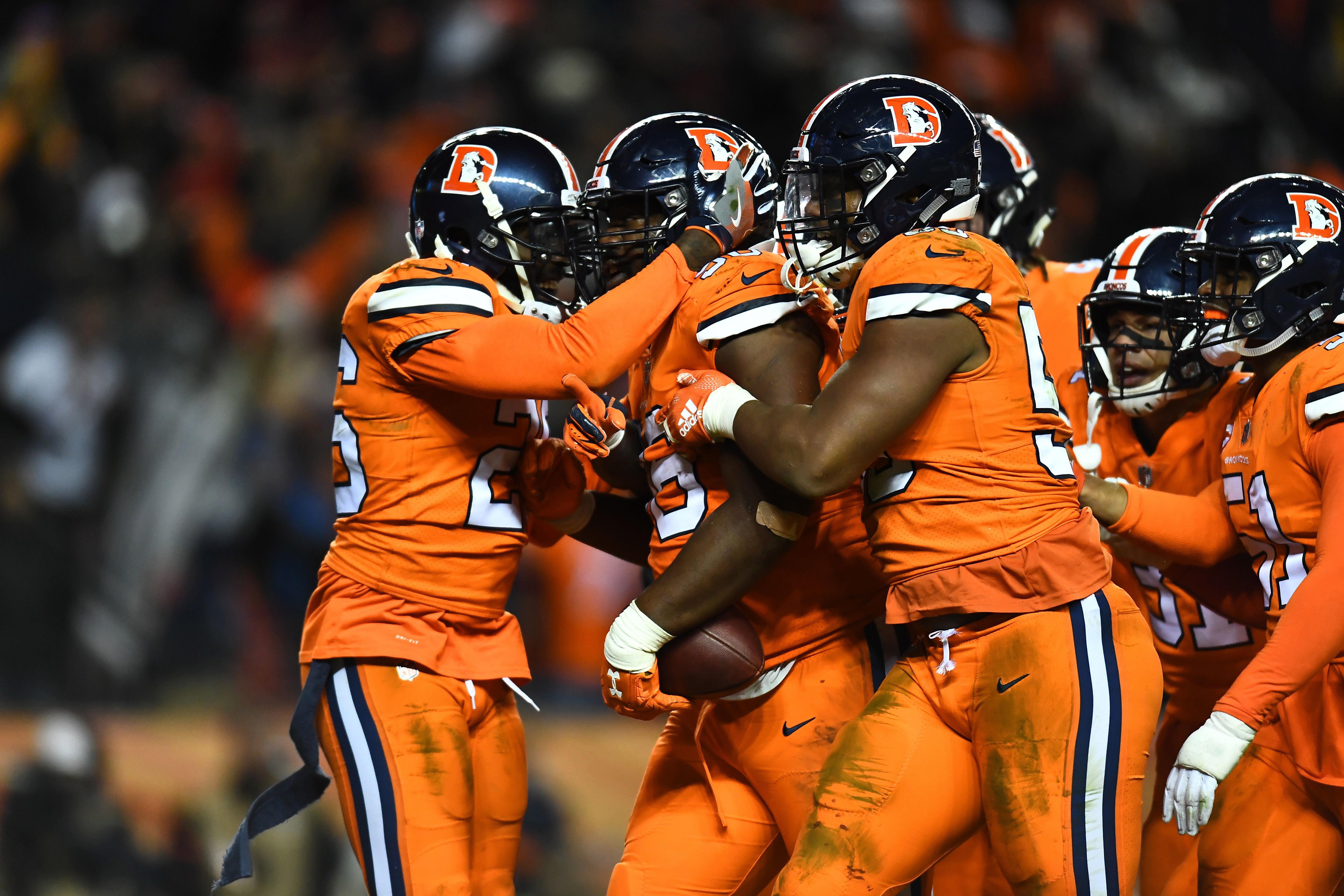 The Cardinals raced out to a 10-0 lead over the Chargers…and then got outscored 45-0 the rest of the way. Adding further embarrassment to its weekend, Arizona cut two starters — right tackle Andre Smith and corner Bene Benwikere. It’s not a great sign for your rookie quarterback when his right tackle is cut after a game.

Derek Carr is beginning to resemble his brother, David. We’re not talking about his looks — but rather the amount of punishment he endures week in and week out. The younger Carr has now been sacked 35 times this season. Oakland currently is tied for the worst record in the NFL. But hey, they’re in prime position for the No. 1 Overall Pick in the 2019 NFL Draft.

The Jets did a decent job of limiting Tom Brady and the Patriots’ pass attack. Unfortunately, Sony Michel and James White combined to run for over 200 yards en route to a comfortable victory. Sam Darnold shouldn’t take a snap the rest of the season.

The 49ers lost again. However, the biggest news out this past weekend was the release of Reuben Foster following yet another arrest for domestic violence. You can’t fault San Fran’s decision to draft the talented linebacker, but it is fair to question why they gave the troubled man so many chances.

The Bills are surging! Okay, not really. But back-to-back wins and a victory over Jalen Ramsey’s Jaguars must feel nice for Josh Allen. Allen didn’t do much through the air (160 yards), but he controlled the game on the ground with 99 rushing yards and a score.

The Bucs easily took out San Francisco to earn their fourth win of the year. Unfortunately, star tight end O.J. Howard is now sporting a cast on his ankle (and thus is out for the season). Are we also seeing the last few weeks of Jameis Winston and Dirk Koetter in Tampa?

What in the world happened to the Jaguars? Losers of seven in a row, Jacksonville fired its offensive coordinator. The franchise also decided to bench quarterback Blake Bortles. A year after finishing one win from the Super Bowl, Jacksonville is now one loss away from the worst record in football.

The Giants looked like the better team for the first 30 minutes in Philadelphia. Then, for some odd reason, the team stopped involving Saquon Barkley and Odell Beckham in the second half. Sitting at 3-8, one must start to wonder if Barkley’s usage rate will be slowed down the rest of the way.

For most of the season (especially the past five weeks), the Lions’ offense has been atrocious. Matthew Stafford doesn’t look right, and Detroit now ranks dead last in 11 offensive categories. If you can’t beat a backup quarterback at home, it may be time for an overhaul.

The Bengals promising start to the season feels like a lifetime ago. In addition to suffering their fifth loss in six games, quarterback Andy Dalton was lost for the season with a thumb injury. Don’t be surprised if A.J. Green follows Dalton to the IR.

What a week for the Cleveland Browns. Beat the Bengals? Check. Stick it to former head coach Hue Jackson? Massive check. The Browns embarrassed Cincy in more than one way on Sunday. A third-straight win this weekend would put an end to Houston’s eight-game winning-streak.

For much of the game, Miami looked poised to knock off the Colts and claim its sixth win. Much to Miami’s chagrin, Andrew Luck, playing like an MVP, led the Colts past the Dolphins in a crucial game. Now Miami trails Indy and Baltimore for the final AFC playoff spot.

How long is Sark going to be calling the plays for the Falcons? After yet another disappointing offensive showing in which Atlanta failed to surpass 20 points, the Falcons find themselves at 4-7. There is far too much talent on the field for Atlanta to score under 20 points in three-straight games.

Suddenly, after back-to-back losses, the Titans are staring up at two teams in their division. Despite Marcus Mariota’s best effort — 22-of-23 for 303 yards and two touchdowns —  the Titans were no match for Houston. They are still within striking distance of the playoffs, but the Titans can’t afford a third loss in a row.

As mediocre as the Eagles have been all season, the defending champs sit only one game behind Dallas and Washington in the NFC East. With wins over its two rivals in the coming weeks, Philadelphia would regain control of the division and thus have a good shot at making the postseason.

Game one without Alex Smith didn’t go so well. Washington’s defense was shredded by Amari Cooper and the Cowboys. Dallas now sits atop the NFC East. In a baffling move, the franchise also claimed troubled linebacker Reuben Foster off waivers Tuesday afternoon.

Green Bay’s season is essentially over. Back-to-back losses to Seattle and Minnesota — two teams ahead of them for a playoff spot — were crushing. Their schedule is rather easy the rest of the way, but it may be too little too late.

Can the Broncos make a run at a playoff spot? Currently 5-6, Denver has games remaining against Cincinnati, San Francisco, Cleveland and Oakland before finishing the season at home against the Chargers. It is easy to imagine the Broncos finishing 9-7.

While the Cowboys have looked good during their three-game winning-streak, their postseason fate will likely be decided over the next three weeks. Tough games against New Orleans, Philadelphia and Indianapolis are on deck. Two wins, and the Cowboys are sitting pretty. One win, and things get dicey.

Lamar Jackson is 2-0 as the Ravens starting quarterback. Sure, the two wins came against two of the league’s worst defensive units. However, a win is a win. With Joe Flacco likely ready to play this week, the Ravens have a tough decision to make. Stick with the rookie who’s won two-straight games, or insert the veteran who offers much more in the passing game.

Andrew Luck is playing like a top-5 quarterback. As a result, the Colts are primed for the postseason. Indy is still within reach of Houston for the AFC South title. The Colts are also firmly entrenched in the wild card race. Will anybody be able to slow down Luck?

Seattle’s victory in Carolina was huge for its playoff hopes. With three games left against NFC West bottom-feeders (Arizona, San Francisco), the Seahawks are in an enviable position heading down the stretch. Holding the tiebreaker over Carolina could be the difference between a 17th game and an early start to the offseason.

The victory over the Packers Sunday night has Minnesota in a good spot heading down the stretch. With that being said, Minnesota’s next two weeks are daunting. Road games in New England and Seattle will not be easy. If the Vikings can come away with at least one victory, they will most likely reach the postseason.

An emphatic eighth-straight victory has the Texans seeing the finish line. In what has been a remarkable turnaround, Houston has gone from 0-3 to holding the No. 3 seed in the AFC. The division is by no means won, but Houston’s two-game lead over Indy gives the franchise some room for error.

Back-to-back duds for the Steelers. After barely escaping Jacksonville with a win last week, Pittsburgh fell flat on its face in Denver. Pittsburgh committed four turnovers on the day. The tough result dropped Pittsburgh from No. 2 to No. 4 in the AFC playoff standings. This week’s matchup offers a potential postseason preview.

Philip Rivers’ historic day — 25-straight completions to open the game en route to a 28-0f-29 mark — will not be forgotten for quite some time. Unfortunately, the day wasn’t a total success. Melvin Gordon suffered a sprained MCL during the victory over Arizona. This injury that could shelve the star back for a few weeks.

Even without the services of quarterback Mitchell Trubisky, the Bears notched their fifth-straight win. With a Sunday night showdown against the Rams looming, Chicago might give Trubisky another week off to get his shoulder right.

To absolutely nobody’s surprise, the Patriots currently hold the No. 2 seed in the AFC. Regardless of this week’s outcome, New England’s trip to Pittsburgh in the middle of December may determine which team earns the No. 2 seed.

The Chiefs play Oakland this week. Thank you, next.

The Saints are on fire. Drew Brees’ performance this year has been well-documented. However, the most encouraging sign as of late for New Orleans is the play of its defense. After struggling for much of the year, the Saints defense has allowed a mere 38 points over the past three weeks.

The bye week came at a great time for the Rams. On the injury front, cornerback Aqib Talib is set to return from the IR. Talib should help settle what has been a questionable secondary this season.