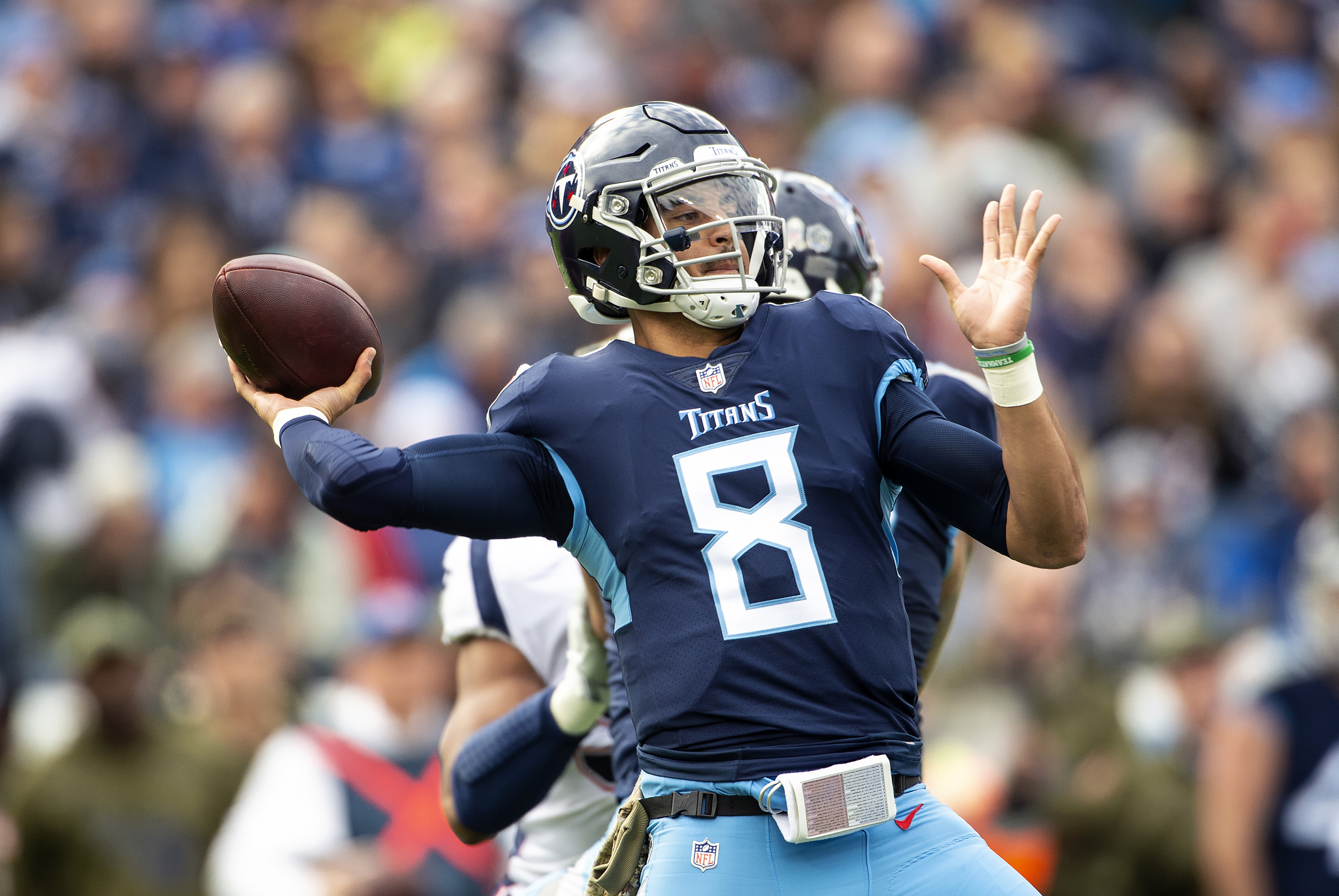 After laying an egg against the Chargers, Oakland has now failed to score more than six points in three of its last four contests. If the Raiders can’t knock off the Cardinals this weekend there is a strong possibility Jon Gruden’s team will finish the year with one victory.

New York’s 31-point thrashing of Detroit to open the season seems like a lifetime ago. Losers of four-straight, the Jets are in need of a serious overhaul. The team simply lacks the requisite talent to compete in the AFC East at this time.

Nobody saw that coming. After scoring a total of 46 points over their previous six games, the Bills put 41 on the board against the hapless Jets. Following its victory, Buffalo mercifully cut ties with Nathan Peterman — quite possibly the worst starting quarterback in NFL history.

While the 49ers aren’t a good football team, they sure do keep things interesting. Nick Mullens had another fine performance quarterbacking the team and has been assured at least one more start. Aside from getting healthy, San Francisco should be most concerned with its leaky defense.

A valiant effort went for not as the Cardinals lost their seventh game of the season this past weekend. It is very hard to win when your offense is averaging a dismal 13.8 points per game. Arizona legend Larry Fitzgerald moved into second on the all-time receiving yards list — trailing Jerry Rice by only 6,943 yards.

Ryan Fitzpatrick threw for 406 yards and Tampa’s backs averaged 4.3 yards per carry. So, how did the Buccaneers only manage to score three points? Thanks to four turnovers. Fitzpatrick accounted for three —  two picks and one fumble —  and Jacquizz Rodgers coughed up another. Talk about an ugly loss.

Eli Manning’s performance in San Francisco may have saved his job for at least a few more weeks. OBJ also enjoyed his first multi-touchdown game of the season, proving to be the difference in New York’s comeback victory.

Detroit may have seen its season end at the hands of Mitchell Trubisky. The Lions were run off the field in Chicago — two late touchdowns notwithstanding — and now trail the division-leading Bears by three games. Detroit hasn’t been able to produce offensively at the rate we’d come to expect.

Nick Chubb, since taking over as the Browns’ lead rusher,  has put the football world on notice. After receiving no more than three carries through Cleveland’s first six games, the Georgia product has shown out. Chubb is averaging 6.2 yards per attempt and has found the end zone five times.

Victories for the Chiefs and Chargers resulted in a bad week for Denver. The Broncos now head to Los Angeles trailing the Chargers by four games, and the Chiefs by five. Vance Joseph doesn’t seem to be the right man to lead the team — will a seventh loss force John Elway’s hand?

Make it five-straight losses for Jacksonville. Even with a defense that remains among the best, the Jags are close to fully imploding. Jacksonville’s stagnant offense is averaging 17.8 PPG — the fourth-worst mark in the league. Things don’t get any easier with Pittsburgh coming to town this weekend.

Brock Osweiler may be relegated to clipboard duty after this week with Ryan Tannehill nearing a return to the field. Since leading the Dolphins to a surprising win over Chicago, Osweiler and the Fins have gone 1-3 —  falling two games behind the Patriots in the AFC East.

Dallas’ season seemed to be on the brink of disaster heading into its showdown with Philadelphia. Instead, a surprising victory over the defending champs has thrusted the Cowboys back into the playoff picture. Trailing Washington by only two games, Dallas has time to flip the script.

Andrew Luck is back. Luck has rediscovered his form and the Colts have won three-straight as a result. If Indy can take down Tennessee this weekend, the Colts may be viewed as a dark horse to make the playoffs.

With Joe Flacco ailing and Lamar Jackson battling a stomach bug, Robert Griffin III may be the man to lead Baltimore into battle this weekend. A loss to Cincinnati could signal the end of an era for the Ravens. With Jackson ready to takeover at quarterback, it is time to think about the possibility of John Harbaugh also nearing the end of his tenure.

Week 10 result: Lost to Cleveland 28-16
Up Next: vs. Dallas
Trend: -6
The Falcons’ three-game winning streak came to a crashing halt as the team put up an absolute clunker in Cleveland. However, reinforcements are on their way. Pro Bowl linebacker Deion Jones is set to return after missing the past eight weeks due to injury. Jones should make a big difference for Atlanta’s defense.

Two tough losses have hurt Seattle’s playoff chances to a degree. Thursday’s game against Green Bay could go a long way in determining the fate of both teams. Seattle will lean on its rushing attack to carry them to victory, while hoping to limit Aaron Rodgers’ effectiveness.

The first game without A.J. Green couldn’t have been any worse. The Bengals were simply outclassed by New Orleans. Furthering their pain, Joe Mixon is having knee problems once again. If Mixon joins Green on the bench, the Bengals will be without their three best offensive weapons.

The Eagles blew a golden opportunity to essentially eliminate one of their main rivals from the playoff hunt. By losing to Dallas not only did Philadelphia give its rival life, but now the Eagles trail Washington by two games. This week’s matchup with New Orleans will be the most important game for the franchise this season.

The Titans are playing their best football at the right time. A 24-point shellacking of New England should give Tennessee a ton of confidence heading into its most pivotal stretch of the season. With back-to-back road games in Indianapolis and Houston, Tennessee has an opportunity to seize first place in the South.

A win is a win. Washington may have given up over 500 yards of offense, but only three points were conceded. The Redskins hold a two-game advantage over Dallas and Philadelphia. If the team wins four of their remaining games they should win the NFC East.

The Dolphins were just what the doctor ordered. The Pack got back into the win column at the expense of the struggling Dolphins — meaning Green Bay remains within striking distance of a playoff spot. A victory in Seattle could be the difference between making or missing the postseason.

The Texans have had plenty of time to prepare for the Redskins. With a huge divisional matchup looming (Tennessee), Houston must be careful to not overlook the 6-3 Redskins. If Houston can make it seven wins in a row this weekend, Deshaun Watson and co. will be sitting pretty as they head back home to face the Titans.

After 10-straight losses to divisional opponents, the Bears finally beat an NFC North foe. First place in the North after Week 10, Chicago can further solidify its position with a win over Minnesota. Mitchell Trubisky must protect the ball in order to knock off the dangerous Vikings.

Fresh off a bye, the Minnesota Vikings are looking to claim sole possession of first place in the NFC North with a win over the Bears. With Dalvin Cook’s balky hamstring is back to full strength, Minnesota’s offense should be primed and ready. This matchup has all the makings of a defensive battle — will the veteran Vikings outlast the emerging Bears?

New England was flat-out dominated by Tennessee. While this loss wont hinder New England’s chances of making the playoffs, the loss could have a big impact on seeding. With the Chiefs, Steelers and Chargers rolling, the Patriots can not afford to lose many more games.

There is no shame in losing to Pittsburgh at Heinz Field. However, a 52-21 drubbing is not ideal. Carolina also lost ground in the NFC South due to New Orleans’ victory. Carolina’s best case scenario this weekend would include a victory and a Saints loss.

Now that Le’Veon Bell is officially out for the season, Pittsburgh can focus solely on the task at hand.  Currently holding the No. 2 seed in the AFC, the Steelers  are one of the hottest teams in football. The offense continues to hum, and as of late Pittsburgh’s pass rush has become menacing.

The Chargers are doing everything in their power to win the AFC West. Unfortunately, to this point, the Chiefs will not lose. Los Angeles hopes to gain ground this week as it has an easier matchup. Regardless of their standing within the division the Chargers are a near lock to make the playoffs.

Although they had their ‘worst’ offensive performance of the year last week, the Chiefs’ 26 points were more than enough to claim their ninth victory of the season. It is possible Kansas City was looking ahead to its matchup with the Rams — although they won’t be happy playing in Los Angeles as opposed to Mexico City.

Any worries of a letdown following the win over the Rams were squashed early in Cincinnati. New Orleans scored on every possession except one — running out the clock to end the game — en route to a 51-14 final.