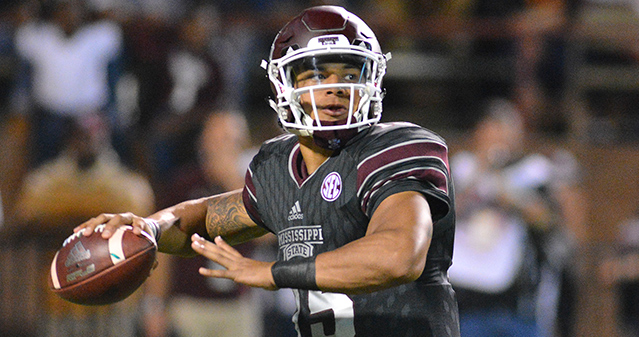 As players prepare to enter the NFL, they are under an enormous amount of pressure. Any miscue can severely harm their draft stock – a lesson former Mississippi State quarterback Dak Prescott is now learning the hard way.

The 22-year-old from Louisiana was charged with a DUI – a shocking story considering Prescott’s reputation as a strong leader and high character individual. The mobile QB was pulled over while driving his white Escalade in Starkville, Mississippi.

The 6-foot-2, 225-pound Bulldogs star said he believes his real character will be shown in the future.

“I’m very remorseful for my misjudgment,” Prescott said. “I want to apologize to my true supporters, my family, Mississippi State University, the NFL, and the kids who look up to me. I won’t ask for forgiveness; however, I’ll show the true man I am and exhibit my character through my actions and behavior moving forward.”

Prescott was projected to be a third or fourth round pick before his major blunder. The dual-threat signal caller was one of the most dangerous players in the SEC the past two seasons. He was in the Heisman discussion in 2014 after compiling 3,449 passing yards, 986 rushing yards and 41 total touchdowns and added to his impressive resume with 3,793 passing yards, 588 rushing yards and 39 total touchdowns in 2015.

He owns just about every passing record imaginable at Mississippi State University, graduating as one of the program’s most revered players.

But despite his many collegiate accomplishments, his professional career couldn’t have gotten off to a worse start. Coming only six weeks before the NFL Draft, Prescott now faces a major uphill battle in proving he has what it takes to lead an NFL franchise.