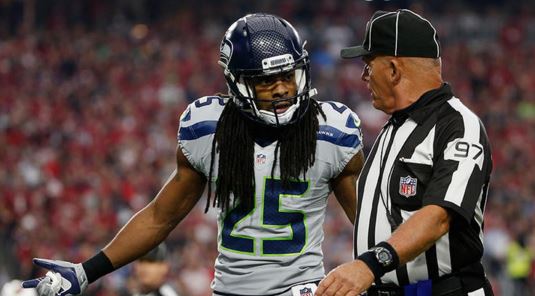 The annual owner meetings have officially come to an end, and new rules for the game have been applied. Much like last year’s decision to test extra points from the 15-yard line, owners have agreed to test two new rules for the 2016 season.

The first rule once again involves the special teams aspect of the game, as teams will now receive the ball on the 25-yard line (instead of the 20) for a touchback. As player safety continues to become a higher priority, the NFL is slowly moving to a policy of eliminating the kick-off altogether.

The NFL is also trying to eliminate unsportsmanlike conduct penalties, and therefore has implemented an automatic ejection rule for players who commit two in a single game. While many believe this will better protect players from dangerous behavior, some coaches and players have expressed their displeasure with the proposed rule.

As usual, Seattle Seahawks cornerback Richard Sherman was the most vocal in voicing his disapproval. Sherman directly criticized commissioner Roger Goodell for deeming the proposed rule as one “something somebody who’s never played the game” would suggest.

Head coaches Bill O’Brien of the Houston Texans and Bruce Arians of the Arizona Cardinals echoed similar sentiments to Sherman, as Arians was quoted saying, “You can cheap-shot guys now to get them to retaliate. So now I got one on you in the first half. I’m damn sure going after you in the second half.”

Arians brings up a valid concern since star players will undoubtedly be egged on by their opponents if they receive one unsportsmanlike penalty. But after seeing antics like Odell Beckham Jr. against Josh Norman and the Carolina Panthers last season, the NFL clearly needs to do something to regulate out-of-control behavior.

These two new rules will endure one-year trial runs through the 2016 season, but with both intended to better protect the safety of players, there’s little doubt they will be permanent rules by the time the 2017 season kicks off.